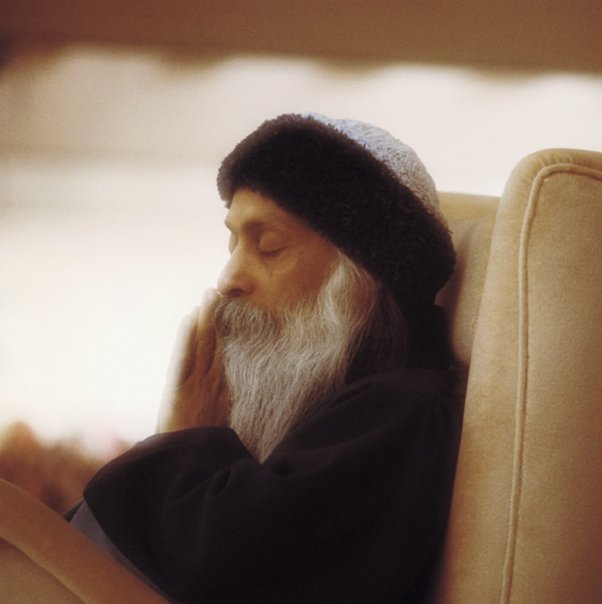 Question : Beloved Osho, After two weeks of hypnosis sessions with kaveesha, i can now see my resistance to relaxation. In looking for a cause for this, i saw that to me, to relax means to be lazy and useless. My family would rather be sick than let go of their so-called power, thinking that being busy and frantic means success. I learned their message too well, and now, once more, i need you to redefine a word. Would you please explain what relaxation really is?

Osho : Relaxation is not something big. It is a simple matter. It is just waking sleep. You need every day a few hours of sleep. Try to understand the phenomenon of sleep.

And as he becomes mature, it comes to a fixed normal routine of seven or eight hours. This will continue until he starts feeling old. This will be different with each individual, because somebody will die at seventy, somebody will die at eighty; and some fellows are so stubborn, they will die at ninety, a hundred — and there are people who have gone beyond a hundred. So as a person starts feeling old, tired, his sleep is cut even more — he is sleeping three to four hours, then slowly to two to three hours.

Why does this happen? — that in the mother’s womb a child is sleeping twenty-four hours a day, and an old man is sleeping only two or three hours in the night? The reason is that in sleep your body functions perfectly without your interference. For nine months in the mother’s womb, the body works so much — it will not work that much in the whole remaining life — because in those nine months the body has to pass through all the evolutionary steps that humanity has taken since the very beginning.

The scientists now say that life was born in the ocean, and the child in the beginning is exactly like a fish. In nine months he covers almost two to three million years of progress. The body is involved in such a work that it does not want any interference; and if a child is awake, there will be interference.

The old man, as he gets older his body is no longer building any new tissues, any new nerves. The old nerves are dying, and they are not being replaced by new ones. The inner work of the body is lessened because the man is going to die. Now the preparation for death is cutting off the sleep. Just as in preparation for life twenty-four hours of sleep a day was needed, now preparation for death needs almost no sleep.

Relaxation is a deliberate effort to allow the body to do its work without your interference. You simply become absent; you leave the body as if it is a dead corpse — and it is needed. As human life has become more and more tense, more and more frantic, more and more speedy, the ordinary sleep is not enough. Relaxation leads you to a deeper realm of sleep.

The society certainly prepares you for activity, for ambition, for speed, for efficiency. It does not prepare you to relax and to do nothing and to rest. It condemns all kinds of restfulness as laziness. It condemns people who are not madly active — because the whole society is madly active, trying to reach somewhere. Nobody knows where, but everybody is concerned: “Go faster!”

I have heard about a man and his wife driving on a road as fast as they can. The wife was telling the man again and again, “Just look at the map.”

There is a very famous anecdote about George Bernard Shaw. He was traveling from London to some other place and the ticket collector came. He looked in all his pockets, in the bag, he opened his suitcase. And the ticket collector said, “I know you. Everybody knows you. You are George Bernard Shaw. You are a world-famous man. The ticket must be there, you must have forgotten where you have put it. Don’t be worried. Leave it.”

The ticket collector said, “That is too much. I was just trying to help you. Don’t get disturbed. Maybe you can remember it later on by the time you reach the station. How can I tell you where you are going?”

But everybody is in the same position. It is good that there are no spiritual ticket collectors around, checking, “Where are you going?” Otherwise you will be simply standing without any answer. You have been going, there is no doubt about it. Your whole life you have been going, somewhere. But actually you don’t know where you are going.

You reach a graveyard, that is one thing that’s certain. But that is the one place you were not going to, the one place nobody wants to go, but finally reaches. That is the terminus where all trains end up. If you don’t have a ticket, wait for the terminus. And then they say, “Get down. Now the train goes nowhere anymore.”

In my village we had a beautiful graveyard just by the side of the river. It was a very silent place, and nobody came there unless he was brought. Nobody wanted to come there. I had found it a beautiful place to meditate, to relax, to rest. Beautiful marble graves — big trees with great shadow. It was a beautiful place.

My father was very angry when he came to know — that when I suddenly disappeared, and I could not be found anywhere…. Somebody told him, “You will not find him whatever you do, because one place you will never look and that is the graveyard. And I have seen him, because going to the river is my business.” He was a fisherman. He said, “I have seen him many times going to the graveyard; and he disappears there.”

My father said, “This is strange. Why should he go to the graveyard? Let him come home.” Nobody even tried to look for me in the graveyard; nobody wanted to go there. When in the evening I came home, everybody was angry, and they stopped me outside. They said, “First you take a bath. And every day you have been going to the graveyard?”

I said, “Finally one has to go there. Why are you getting so angry? You all will be going there. I am simply visiting the place where finally one has to rest. I am learning already to rest there. One day I will be resting underneath the marble, right now I rest on top of the marble. And it is a tremendously beautiful and silent place.”

They said, “We are not concerned about these strange explanations. First, you take a bath.”

I said, “I can take a bath. I will take a bath every day, that is not a trouble for me. That will not prevent me going to the graveyard, because your temple is continuously crowded, it is a marketplace — it is in the marketplace. Every place is full of people — wherever you go, there are people. That is the only place where there are many people, but they are all relaxing, in deep relaxation, with no way to wake up again.”

In the night my mother asked, “But you must be feeling afraid.”
I said, “Why should I feel afraid? Those people are dead. One should be afraid of the living, because those are the people who can do something. These poor people are dead, they cannot do anything. They cannot even get out of their graves. And you are afraid of them, and they are simply relaxing, relaxing forever.”

The whole society is geared for work. It is a workaholic society. It does not want you to learn relaxation, so from the very childhood it puts in your mind anti-relaxation ideas.

I am not telling you to relax the whole day. Do your work, but find out some time for yourself, and that can be found only in relaxation. And you will be surprised that if you can relax for an hour or two hours out of each twenty-four hours, it will give you a deeper insight into yourself.

It will change your behavior outwardly — you will become more calm, more quiet. It will change the quality of your work — it will be more artistic and more graceful. You will be committing fewer mistakes than you used to commit before, because now you are more together, more centered. Relaxation has miraculous powers. It is not laziness.

Just relaxation on all three layers — body, mind, heart — for two hours he is almost absent. In these two hours his body recovers, his heart recovers, his intelligence recovers, and you will see in his work all that recovery.

Relaxation can transform you to such beautiful heights — and it is such a simple technique. There is nothing much in it; just for a few days you will find it difficult because of the old habit. To break down the old habit, it takes a few days.

So go on using the hypnotic technique for relaxation. It is bound to come to you. It will bring new light to your eyes, a new freshness to your being, and it will help you to understand what meditation is. It is just the first steps outside the door of the temple of meditation. With just deeper and deeper relaxation it becomes meditation. Meditation is the name of the deepest relaxation.

Source : Osho Book “The Transmission of the Lamp”

Osho on Sleeping – If you enjoy sleep, it is far better than any examination