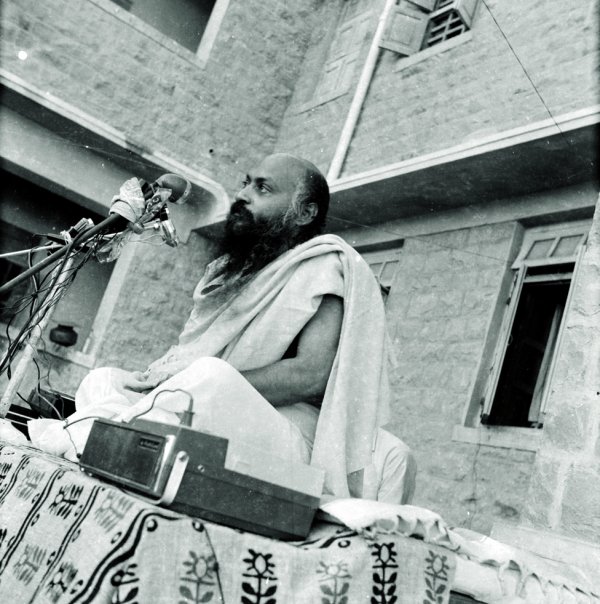 Osho – Man is all alone. He is in darkness. He is without support. He is unsafe and afraid. This alone is his worry. The way to get rid of it is religion. Religion is fundamentally the way of working in
fearlessness.

But the religions, only in name, are most afraid of the fearlessness itself. Their support and life itself is the ’fear’ in the hearts of men. Fear itself is their food and life. The fearlessness is the end of their life. The fear in men has been exploited a good deal, and in this exploitation religions have not been far behind; perhaps they have been foremost. With the support of fear the supernatural beings exist; with the support of fear does also the god of religions. The supernaturals, supported by fear, have merely threatened men but, even so, this has never been more than a game for their pleasure. But the fear supported God, has killed the man outright. His game has been very costly. Life has got entangled in the nets of fear, and how could pleasure be there where there was fear and fear alone?

I say: ”God has no relation to fear. Most certainly, under the cover of God, some one else is exploiting this fear. Religion is not in the hands of the religious people. It is said, that whenever a discovery of truth is made the Satan is the first to take hold of it. The souls in which the religion is manifested, and those which deal in religion, are not only different but are basically opposed. Religion has all alone been in the hands of its enemies; and if this fact is not realised while there is time still, the future of man will not be good or worthy of a welcome.

Religion has to be saved not from the irreligious, but from the so-called religious people; and without doubt this job is more difficult and troublesome. As long as religion is based on fear, it cannot be real religion. God’s basis is love. God has no truce with fear. Man needs the god of love. There is no other way to God except love. Fear is not only wrong, but it is also killing; because where there is fear there is hatred; where there is fear, there love is impossible.

Religion wanted to live on fear and therefore its temple gradually got shattered. Temples are for love. Temples of fear are impossible. Fear has no temples; it has only prisons. I ask: ”Are the temples of religion, temples or prisons?”

What is religion? Fear of sin? of punishment? of hell? or of greed? – of good deeds, of reward or heaven?
No. Religion is neither fear nor greed. Greed is only an extension of fear. Religion is fearlessness. Religion is freedom from all fears.

There is an old incident. Two brothers lived in a town. They were the wealthiest in that town. Perhaps the name of the town was the ’Town of Darkness’. The elder brother was very religious. Daily and regularly, he would go to the temple. He would give charities and do good deeds. He would listen to religious discourses and discussions. He would sit in the company of good people and the saints. Because of him there was a gathering of the saints daily in that house. On account of his attention to God and the saints he had become entitled to heavens in the other world. This was that the good men and the saints explained to him, and this was written in the scriptures also because those scriptures were also made by the group of those good men and saints.

On the one hand, he exploited wealth and on the other he would give charities and do good things. Heaven cannot be attained without charities. There is no wealth without exploitation. There is wealth from the opposite of religion and there is religion from wealth. He exploited others, the good men and the saints exploited him; and the exploiters have always been good friends. But he always pitied his younger brother. He was no good at collecting money and consequently was getting unable to collect religion either. His behaviour, full of love and truth, was coming in the way of his reaching God. Then, he was neither going to the temple nor did he know the A, B, C, of the scriptures. His condition was definitely pitiable and his account in the other world was blank.

He used to avoid the good men and the saints also, as people would avoid infectious diseases. If the saints entered the house from one gate, he would go out from the other. His religious brother used to request many saints to change the heart of his irreligious brother. But there could be a change only if he would stay near the saints. He would not stay. But one day a full-fledged and a real saint came there. No one knows how many irreligious people he had converted into the religious. He was an adept in the theories of peace, persuasion, threat and division. It was his profession to convert people to religion.

It is on such saints that the foundations of religion rest. Otherwise, religion would have disappeared long ago. When the elder brother repeated his request to him also, he said: ”Do not worry. That fool will now be in trouble. I will now see that he remembers God. What I say, I always fulfil”. Saying so, he took up his stick and accompanied the elder brother. He was a wrestler in the past. Thereafter, finding saintliness as a better profession than wrestling, he became a saint. He caught hold of the younger brother immediately on arrival. Not only did he catch him, but he felled him down on the ground and sat down on his chest. That young man was not able to understand anything. He was speechless out of surprise. Even so he said: ”Sir, what is this?”

The saint said: ”Change of heart”.
That young man laughed and said; ’Please leave this aside. Is this a way to change the heart?”

Please take care. You may not get hurt in the body; The saint said: ”we do not believe in the body; we believe in God. Say ’Ram’ and then alone I will leave you. Otherwise, you will find no one worse than I”. The saint was very generous and, therefore, in the interest of the young man he descended to the level of thrashing him. That young man said: ”What relation is there between fear and God? and does God have a name? I will not say ’Ram’ like this whether I live or not” and then he pushed down the saint.

After his fall, the saint said: ”Wonderful, Wonderful!! You have said what you had to say!!! Even in saying that I will not say ’Ram’, you have uttered his name. His brother was very angry with him because the saint was toppled; but he was very much pleased with the saint. He had made his atheist brother utter the name of God. The glory of the name of ’Ram’ is so great that uttering his name once even by mistake will take a person beyond the sea of this life. That day he gave a feast to the whole town. After all, his younger brother had turned religious!