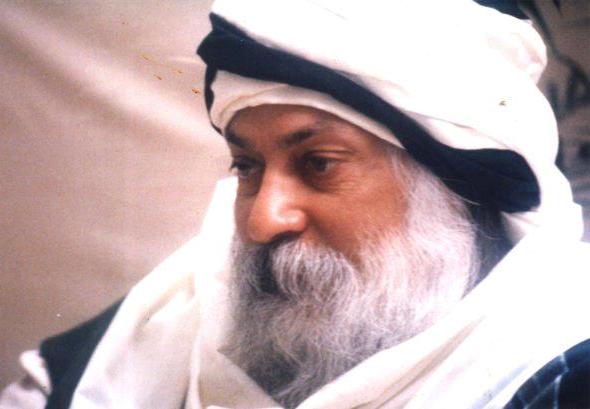 Question – You say you are a buddha, and his teaching was based on simplicity, a simple life. Yours is based on comfort and luxury. Will you please comment on that?

Osho – It is a significant question, with tremendous implications to be understood; one is that there is no difference. You will be surprised to hear it, because you don’t understand the inner mechanism of transformation.

Buddha was born a king. He got fed up with his palaces, with his richness, with his luxury; he became a beggar. In the middle of one night, he renounced his kingdom and went into the forest as a beggar. I was born as a poor man. I got fed up with up poverty. In the middle of one night I renounced poverty, and since then I have been living like an emperor. What is the difference? Just one difference is there: Buddha’s renunciation was simple, my renunciation is very difficult. To renounce a kingdom luxury and is a very simple phenomenon; you just get out of the palace and into the mountains. But to renounce poverty is not so easy, otherwise you would have all renounced it. I have done the more difficult task.

But the inner mechanism is the same — a drastic change in your lifestyle helps you to become enlightened. It doesn’t matter whether from the palace you move to the hut, or from the hut you move to the palace. A drastic change in your lifestyle brings the revelation easily, because it uproots you from your ground, it brings you to a totally new territory. You cannot remain the same, you have to change.

Obviously it seems Buddha did a great thing, but it only seems so. I have done the greater thing. You try! — and you will know immediately that to renounce empires is the easiest thing in the world. To renounce poverty is the most arduous phenomenon.

But Gautam Buddha and the twenty-four Tirthankaras of the Jainas, all these twenty-five people who have impressed this country immensely, have impressed the whole East, were born as kings. You have to understand it: Buddha was born as a king. The incarnations of Hindus, Rama and Krishna, were born as kings. You have not accepted a single poor man as a buddha, as a tirthankara, as an incarnation of God — that shows your mind.

You respect luxury, you respect kings. In fact, you have respected Gautam Buddha not because he was a beggar, but because he renounced his empire. Just think, if Gautam Buddha was born a poor man, and one night he had renounced his poor man’s house, with no clothes, no food, the father dying without medicine. I don’t think you would have ever accepted him as a great master; you have never accepted anybody like that.

Why were the twenty-four tirthankaras all kings? Is not anybody else intelligent enough to be spiritual? Is the whole world empty, with nobody to give it challenge? Do only kings have a prerogative, a monopoly?The reason is that these kings renounced their kingdom, and became beggars. In your eyes, the kingdom is so valuable that it is amazing that a man would renounce something for which you have been hankering your whole life. The man is not respected for himself or his spirituality, he is respected for the money that he has left behind. You are still counting money, you are still looking at the bank balance.

I used to know a postmaster, a poor man, the only earning member of a big family. When his wife died and his children got married he asked me, “I am tired and all my duties are fulfilled. I can renounce the world.”
I said, “What have you got to renounce? How much is your bank balance?”

He said, “Bank balance? I don’t have a bank balance, just three hundred and sixty rupees in the post office.”
I said, “You can renounce, but don’t tell anyone that you had only three hundred and sixty rupees when you renounced; otherwise nobody is going to pay any attention to your renunciation. People will simply laugh.”
After ten years I met the man in New Delhi. He had gathered a good following. One of his disciples told me, “My master was a great rich man; he renounced everything.”

I went to see the master. Looking at me, he felt a little nervous. I said, “Don’t be worried. I will not tell anybody that you renounced only three hundred and sixty rupees.” But they all heard it. Since then he has lost all his following. He is very angry with me.

I want to emphasize the fact that, although you think that you respect Buddha because he renounced, deep down you still respect the empire, the kingdom, the riches — not Buddha himself. With me the situation is totally different. I have renounced poverty. You have to look eye to eye with me. Either you respect me, or you don’t respect me. But money does not come in between.

And moreover, I am against this whole idea of Gautam Buddha, Mahavira and other tirthankaras renouncing their kingdoms. Because they not only renounced their kingdoms, they raised the value of poverty, which you have never thought about — they made poverty something spiritual, which it is not.

Poverty is the source of all crime, all sickness, all that is ugly in life. They made poverty something spiritual, and thousands of people became beggars with Buddha. But have you looked into the whole situation?

The people who followed Buddha left behind them crying and weeping wives, crying and weeping children, old parents. What happened to those people? The wives became prostitutes, the children became orphans, the old parents died without any care and without any medicine, because the man who was the earning member had become spiritual. And this happened to millions of people. Who is responsible for this?

I cannot forgive Buddha, or Mahavira, or other tirthankaras. They raised poverty to spirituality, convinced people, and destroyed thousands of families, millions of people. And the people who became beggars became a burden on the society. Because if you have renounced the world, then you don’t have any right to ask for food from that same world; you don’t have any right to ask for clothes, for shelter, from that same world. This is a strange thing: you condemn the world, and the world feeds you. You renounce the world, and the world supports you. You live on it. These are the people who have reduced the East to poverty, to slavery. No, I am not in favor of poverty.

Look around the world into different religions’ idea of the other world. I will give you a few instances to understand their psychology. In the heaven of Mohammedans there are rivers of wine. Here, on the earth wine has to be renounced. In paradise, where rivers of wine are available, you can drink as much as you want, swim in it, get drowned in it. But it’s very strange: in this world wine is a sin, and in that world it is a reward. I can’t see the connection.

In this world the woman has to be condemned. She is the source of sin, she is the door to hell. If you can manage to renounce the woman you become a saint, and the saints are rewarded with beautiful women in paradise. Not ordinary beauties, those women never grow to be more than sixteen years old. They are stuck for millions of years at the age of sixteen. They don’t perspire, they are always young. In Arabian countries homosexuality has been prevalent for centuries. It is a very shocking thing that in paradise, for saints, young boys are also made available.

I have heard about a disciple whose master, whose whole teaching was celibacy, had died. After a few days the disciple also died. Of course the first thing he looked for in paradise was his master, and he soon found him under a beautiful tree — which remains eternally green! He saw the master, but he was very much shocked because in his lap was sitting an American Hollywood actress, Marilyn Monroe. She was very beautiful, but without any brains, just flesh without any soul. The disciple was very shocked. The master has been teaching celibacy and here he is hugging a naked film actress! But then he thought, “Perhaps this is his reward! He deserves it. His whole life he was celibate; he would not allow any woman even to touch his feet; he would not see any woman. Certainly he deserves it.”

He came close, fell at the feet of the master, and said, “My great master. You certainly deserve such a beautiful woman.”

Before the master could reply Marilyn Monroe said, “You idiot. I am not his reward. He is my punishment.”
I have renounced that world. To me each moment is paradise, and I don’t have any desire for eternal pleasure. In fact the very idea is sick. Just think, if you have anything forever you are going to get bored — if you have any intelligence. The woman may be very beautiful, but to have the woman eternally… just think of eternity, forever and forever, the same woman. In no religious scripture is there any mention of divorce in paradise. Once you are caught by the woman you are caught forever.

All your saints are full of desire, whatever they say. They go on saying to you, “Be desireless.” But why? — so that in paradise all your desires can be fulfilled. But this is not desirelessness; it is motivated. I say to you, there is no need to be desireless. Live each desire with as much awareness as possible, and you will feel a tremendous contentment arising in you. Each moment it goes on growing — you feel fulfilled, here and now. I do not promise you anything after death, because that is a very cunning device of your priests, your prophets, your messiahs. I want you to experience something here.

I am a realist, I am not a dreamer. And my experience is that if you can live each moment with contentment, awareness, silence, joyfulness, this very earth becomes paradise; there is no other paradise anywhere. All those paradises are invented only for idiots to be exploited. I have renounced everything hocus pocus.