Osho on Sacrifice – The people who sacrifice become heavy on others, because they have sacrificed 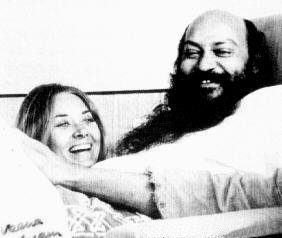 [A sannyasin who is leaving says she loves her old mother and grown children and is reluctant to stay here a long time.]

Osho – Remember one thing always, that unless you follow your desire towards blissfulness, whatsoever you do will be wrong. If you stay there you will take revenge on those people, because it is for them that you are staying there. The revenge will be very unconscious, but you will never be able to forgive them, and that will be more harmful than your coming here.

Never sacrifice your bliss for anything, because if you sacrifice your bliss for anything, you are already in misery and you cannot forgive. The people who sacrifice become heavy on others, because they have sacrificed. They would like others to sacrifice their joy in return. That’s why sacrificing parents are the most dangerous parents in the world. The most crippling impact happens through the sacrificing parents. They are good people – they are the best people you can find – but because they sacrifice, they expect their children also to sacrifice in return.

And the children have to live their lives – they have to seek and search their ways. They have to find their god, wherever it is. They cannot borrow your god, they cannot borrow your bliss. They cannot sing your song; they have their own song to sing. But up to now, down the ages, all over the world, this has been the pattern: parents sacrifice for the children – they remain unhappy; then they force the children to sacrifice, then the children are unhappy… and it goes on and on. Unhappy children will again beget unhappy children. They will say ’We have sacrificed for our parents – you sacrifice for us.’ We learn from others: if you sacrifice for your child, the child is learning one thing from you – that he has to sacrifice for his children. This is a vicious circle that the whole humanity is caught in. That’s why there is so much misery, so much hell.

It can be broken, this vicious circle, only by a simple understanding – that even if sometimes it makes you feel sad when you have to do something for your own bliss, you have to do it. And in the long run nobody is going to be a loser because of it. If you are happy, you will be more loving towards your children; if you are happy, your children will be more loving towards you. And if you can leave your children for the search that has called you, you are making them independent, and they can leave everything and anything when their call comes. You are making them not only independent: you are giving them their real soul. They will always be happy that they had a mother who was not a martyr.

On the surface it looks very selfish, but my observation is that the really selfish people are the only altruistic people in the world. They don’t sacrifice; they don’t force anybody else to sacrifice. They live in joy and they create ripples of joy for others too. And I know – life is complicated: if you do one thing, you have to leave something else. And one has always to choose – one cannot have all the things. But always remember: whatsoever feels to be more blissful to you, choose it, whatsoever the cost.