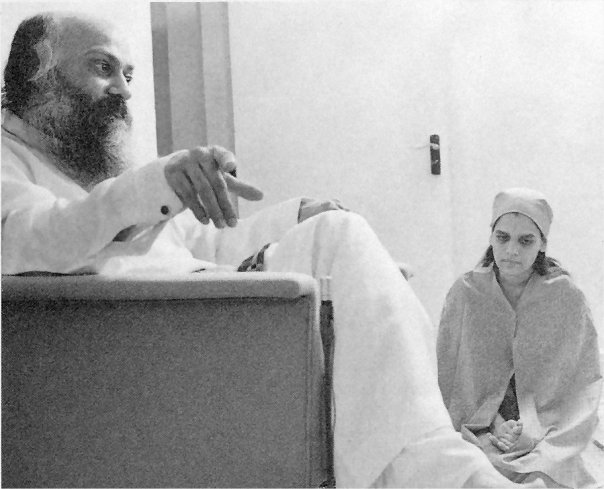 Osho – Sahajo is the name of one of the most important woman mystics of India. There have been very few women mystics in the whole history of man for the simple reason that man never allowed them to discover themselves.

Humanity up to now has lived in a very ugly way. Half of humanity, the feminine half, has been reduced to a thing. Women have not been allowed to discover their being; in fact, many cultures have believed that the woman has got no soul to discover. What is there to discover? — she is just a body to be used by man. And that is the ugly part of the biblical story — that God made woman for man’s use because he was alone, feeling lonely. The story is anti-feminine, it is male chauvinistic.

God makes Adam for his own self, but because Adam feels lonely, God makes a woman — but in a different way. He just takes a rib out of Adam’s body and creates a woman. So the woman is just to be a part of man’s life. She cannot be herself; she is only a rib, a bone, to be used as a means.

All the religions have supported this ugly nonsense, this idiotic idea. That’s why I say the real religion, a religion which makes everybody capable of discovering God, has yet to be born. Hence, only a few women — their names can be counted on one’s fingers — have attained to the ultimate peak. Sahajo is one of them.

In India we have known only five women who can be compared to Buddha, Christ, Zarathustra, Lao Tzu and Nanak. One is Meera, whose name is well known all over the world. The second is Lalla — she was born in Kashmir, and Kashmir has tremendous respect for the woman. In Kashmir there is a saying that they know only two names: Allah and Lalla. Allah means God, and Lalla means the woman Lalla. The third name is Sahajo; the fourth name is Daya — another contemporary of Sahajo and a friend of Sahajo. And the fifth name is Mallibai, one of the tirthankaras of the Jainas, one of the most important masters.

Literally, the meaning of Sahajo is spontaneity — and that was her teaching; hence the name was given to her by her master. Live spontaneously, moment to moment. This moment is all. The past has to be dropped, forgotten, because it is no more, and the future has not to be worried about because it is not yet. Then all that is left is this beautiful moment. Rejoice in this moment, live in this moment totally and this moment becomes the door to God.

Jesus says to his disciples, “Look at the lilies in the field — they are far more beautiful than even the emperor Solomon attired in all his precious clothes and ornaments, in all his grandeur. These poor flowers, lilies, are far more beautiful than Solomon, for the simple reason that they don’t think of the morrow. They live in the moment, herenow. That is their beauty.”

And my own observation of the female is that she is less worried about the future than man and less burdened with the past than man. She is more realistic, pragmatic, more rooted and grounded in the earth; hence it is easier for her to be spontaneous. And spontaneity and a life of spontaneity can become the whole path.

God knows only one time and that is now, and only one space and that is here. God is always now-here. So once you withdraw yourself from the past and the future, only God is left. There is no need to pray, there is no need to go into scriptures, there is no need to dig into all kinds of stupid esoteric teachings. One can be very simple and one can find the truth without any fuss. The whole of theology is an unnecessary fuss, much ado about nothing. And this is my approach too — to live totally in the present. Nothing else is needed.