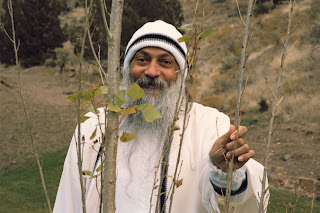 Osho – This is a beautiful definition of samadhi. When the mind is still and the reality is still — when you are out of the vicious circle — all is silence, profound silence. The word, SAMADHI has to be understood. It means coming to a state of absolute equilibrium, coming to a state of absolute balance. The word comes from Sanskrit. And Sanskrit is one of the languages in the world which has words with profound meaning.

Not just dictionary meaning, but with existential meaning. Other languages have only dictionary meanings. Sanskrit is the only language in the whole world which was created by enlightened people. It is a created language. It has never been a language of the people. There was no time when the whole country was speaking Sanskrit. All other languages of the world have been used by people at some time or other.

Many have become dead languages, like Latin or Hebrew or Pali or Prakrit. Many languages which were once living languages, have become dead ones. But Sanskrit has never been a language of the people. This is a very strange phenomenon. It has been the language of enlightened people, hence every word has two meanings; one, a dictionary meaning for the scholar and one, the existential meaning for those who are in search of truth.

Sanskrit has two words VYADI and SAMADHI. VYADI means “sickness of the soul” and SAMADHI means “health and wholeness of the soul.” But these are existential meanings. A man who has not experienced samadhi is spiritually sick. He may be bodily fit, but he is not spiritually fit. It is possible a man may be bodily sick, but he can attain to samadhi.

Even at the last moment of your life, you can attain to samadhi. Your spiritual being comes in all its health, wholesomeness. Even if for a single moment you have known samadhi, you have known the greatest secret in existence. There is no word in any language synonymous to samadhi. Only one word in Japanese comes a little close to it, but it is not synonymous. That word is SATORI. And unfortunately, the Japanese have stopped at satori thinking that it is samadhi. Satori is only a glimpse of samadhi — a faraway glimpse.

And the people who don’t know samadhi are wandering without a home. They are homeless people, rootless people and their whole life is nothing but a tragedy. Samadhi gives you roots in existence, and it opens the doors of your home. Samadhi is the ultimate actualization of your potential. And the way to samadhi is simple. Drop the mind — go beyond the mind and you will enter into samadhi.

Mind is the only barrier and strangely we are continuously educating the mind to become more and more powerful. Our whole educational systems around the world, are nursing the mind — your enemy, making it stronger, more informative, more knowledgeable. In a more intelligent world, meditation should become absolutely mandatory in every school, in every college, in every university. And unless a person has some taste of samadhi, he will not be allowed to leave the university. He will not be given the certificates to leave.