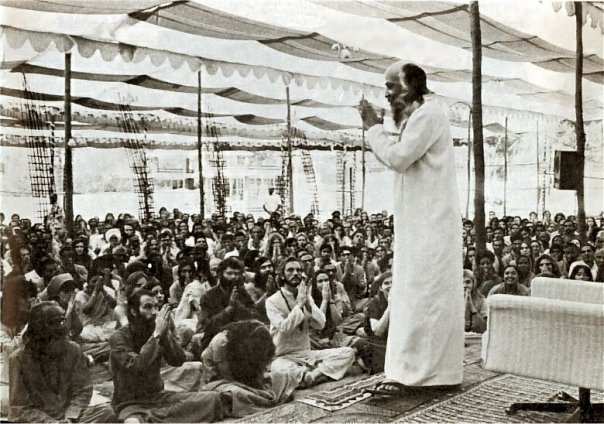 Osho – Buddha called his community SANGHA. Buddha says to his disciples to seek three refuges. When anybody comes to surrender he has to surrender to three things. He says: “I surrender to Buddha, I surrender to sangha, I surrender to DHAMMA.” Buddha is the alive, the presence herenow. But he will not be there always. Sooner or later he will disappear, just as a lamp disappears and then you cannot find where the flame has gone. Buddha will disappear — this body cannot contain him for long, because the body is mortal and he is immortal. The vehicle is weak, the vehicle cannot persist for long. Sooner or later the body will fall and the flame will disappear. Then to whom will you surrender? So Buddha says, “I am creating a community: the sangha.”

The community is a group. When the buddha is there you can look at him — he can be helpful, he can guide you, he can take you out of your misery and darkness — but when he is gone, then there is only one possibility: you should join together to help each other. A few will be a little ahead, a few will not be so. A few may be lagging behind, a few may be marching forcibly, a few may just be fast asleep; but if there is a community, then those who are lagging behind can also be helped. The community can take care of them: the community can think about them, can love them, can help them, can guide them. When a Buddha is alive there is no need, but when the Buddha is gone a community is the only refuge.

There is a parable in India that once it happened that a great fire broke out in a forest. Two men were helpless there in the forest, they couldn’t get out of it, because one was blind and another was crippled in the legs. The crippled one could not run: he could see, but he could not run. The blind one could run fast, but he couldn’t see. So they formed a community. They talked to each other and they said, “We can help each other.” So the blind man took the crippled man on his shoulders. They became one man. The blind could walk, the crippled could see. They helped each other. They came out of the fire; they were saved. Separate they would have died; together they found the way out.

Source – Osho Book “Come Follow To You, Vol2”
Pin It

One thought on “Osho on Sangha – Buddha called his community SANGHA”