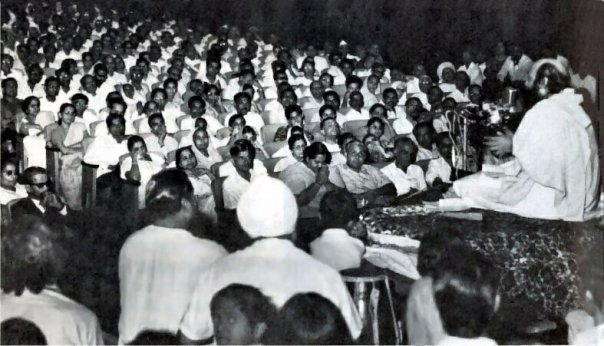 Question – Beloved Osho, When we are scattered throughout the world, most of us far from you and living in small groups. Then what is the meaning of the second gachchhami: sangham sharanam gachchhami?

The second gachchhami is Sangham sharanam gachchhami — “I go to the feet of the commune of the awakened one.” The question has arisen about the second because now the commune in America is no more — but there are sannyasins all around the world. In a very subtle way, now our commune exists all over the world.

So don’t take it that the Oregon commune’s disappearance is just a disappearance; it has appeared everywhere where a sannyasin is alive and breathing. So the second gachchhami does not lose any meaning, it gains more meaning. It becomes universal.

It is easy to go to a master and to surrender. It is the simplest thing to do because the awakened person functions almost like a magnet. You are not doing anything, you are simply being pulled by the magnet. The second gachchhami is difficult, and hence more important than the first.

Now you are not only magnetically attracted by the charisma of the master…. You have tasted his love, his compassion, his awareness, his being. In his disciples it will not be so strong, it will not be a magnetic force…. But you have tasted the very being of the master in your surrender: you can recognize that anybody who has surrendered to the master has become in a very deep sense your brother or your sister. A love, because of the master, has arisen amongst the disciples. I call it love, I don’t want to call it any kind of organization. And to surrender to these simple people who have not yet arrived will make you more humble, will take your ego completely away from you.

The commune is now all over the world. Wherever a sannyasin exists, the commune exists. And when you are saying, “I go to the feet of the commune,” you are surrendering to millions of people. It is a tremendous experience of being egoless.

With a master there is a difficulty: you may surrender to a master because he is worthy of that — it is almost a demand from his very being. He is not saying anything to you, but his every breath is a demand. And the height of the man and the flight of his consciousness, on the one hand will help you to go to his feet; but on the other hand it may give rise to a subtle ego, that you have found a great master. In finding a great master, unconsciously you think you have become a great disciple.

But when you are doing the second gachchhami that possibility does not exist at all. You are simply being humble, you are simply showing your love — through the disciples — to the master.

In the beginning the third gachchhami will be vague, abstract, but as you go on deeper in your surrender, with the first two gachchhamis, the third starts taking on more of a reality. It is not a dream, it starts becoming a truth.
All those three gachchhamis are deeply interconnected so none of them can be dropped at any point.