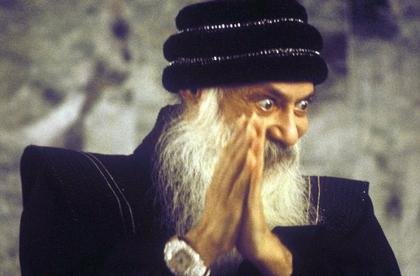 Question – Beloved Master, What is the meaning of sannyas in the world today?

Let me summarize it in a single statement: all the religions and their priests are against God. If God is the creator of the world, then to renounce it or to teach renunciation is an act of sabotage. It cannot be called religious, it is not spiritual.

My sannyas gives it the right meaning it deserves. My sannyas does not mean renunciation, it means rejoicing — rejoicing in this beautiful world, rejoicing with totality, intensity, awareness, compassion, love, of all that existence has provided for you without any guilt, without any sin. All ideas about guilt and sin are created to exploit you.

I am reminded of a story…. A man used to sell Gandhi caps. And particularly at election times he earned enough to rest for five years. The elections were coming nearer, but the man was getting old. He was sick. He had prepared thousands of caps. He said to his young son, “I will not be able to go to the market” — which was a few miles away from his village — “you will have to go, but it is not a difficult thing. There is great demand for the caps, as the elections come closer.

“Just remember one thing: going to the market, the road is tremendously beautiful, very scenic. On both sides it has great, beautiful trees, with thick shadow, and one wants to rest, to sit for a while. I want you to be warned about what happened to me once when I was resting under a banyan tree.

“It was so calm, so quiet, that I fell asleep. When I woke up I was surprised. My bag of caps was empty — all the caps were gone. I looked all around, and then I heard monkeys giggling above me on the tree. They all had the Gandhi caps on. Just the way I was wearing one cap, they had imitated me. Although I was in great misery that they had destroyed my whole business, still I enjoyed. They looked so beautiful, as if all the great leaders from New Delhi had come on the tree! Then I remembered the advice my father had given to me, because the same thing had happened to him. History repeats. He had told me that if something like this happens, just throw your own cap. I threw my cap, and all the monkeys threw their caps. I collected the caps and went to the market….

“So you remember! In the first place, don’t stay under a tree where monkeys are. And in case you have to rest, and something like this happens, remember the advice.”

The son went, and the father was right — there was a beautiful, big banyan tree. Hundreds of bullock carts could have rested in its shadow. It was so calm and so quiet, so far away from all villages that he could not resist the temptation to rest for a while. He was tired too, it was a hot day.

He rested, and when he woke up, he found the bag was empty. He looked up. The monkeys were sitting on the tree with the caps on their heads. But he was not puzzled, because he knew the secret. He threw his cap. One monkey came down, took the cap, went up the tree. He could not believe what had happened. The monkeys had learned! And this was the only monkey who had not got a cap! They were waiting for when this idiot would throw his cap… and they had a great rejoicing. Even monkeys learn.

It seems only man does not learn. Your old sannyas has in every way destroyed your life. It has made everything condemned. Your love is sin, your being comfortable is sin, your being rich is sin… Jesus says, “Blessed are the poor, for they shall inherit the kingdom of God.” Can anybody who has a little sense, agree with Jesus that “blessed are the poor”? If the poor are blessed, then why is everybody trying to remove the poverty from the world? Then let the poverty grow because it is a blessing! The more poor you are, the more blessed you are. Nepal is one of the poorest countries in the world. You are blessed according to Jesus. You should be happy. You will enter into the kingdom of God before any American.

I don’t think that in suffering, poverty, torturing yourself, torturing others because of your renunciation, you are becoming beloved of existence. You are going farther away from the source of life; you are coming closer to death, and death is not the goal of religion. The goal of religion is eternal life, and life includes rejoicing.

Hence I teach a sannyas which is just the opposite of the old sannyas — diametrically opposite. I want my people to go to heaven, to paradise — all the way dancing, singing songs of joy. And I think they will be the first to enter into the kingdom of God, not the people who are basically sick.

I would like you to remember what the old religions have been teaching to people. They have been making them schizophrenic. They have been creating a split in their personality. They are making them divided against themselves. There have been saints, whose only quality and contribution is that they were very efficient in torturing themselves. You know perfectly well they will lie down on a bed of thorns. This is tapascharya, this is austerity. But do you think existence wants you to lie down on a bed of thorns? Is existence a sadist that it wants you to be tortured?

There have been Christian sects — they are still in existence — which wear shoes with nails inside protruding into their feet, so when they walk they are continuously hurting, wounding their feet; continuously blood is flowing. They have belts around their waists with the same device — nails reaching deep into their skin. The wounds remain for their whole life, because those belts cannot be removed. They are locked, and their keys are thrown away. They have taken that austerity for their whole life. Do you think this is something healthy, something sane?

In Soviet Russia, before the revolution, there was a great Christian sect — the most prominent and the most respected. But you will be surprised when you come to know the reason for their respectability. They used to cut off their genitals. They were real celibates, because a man can take the vow of being a celibate but his genitals are there intact. Who knows? He may be deceiving…!

Thousands of Christian monks would cut off their genitals publicly. The women were at a loss, but they came up with an idea — they started cutting off their breasts. This was thought to be a great spiritual act. And the same kind of thing, more or less, has prevailed all over the world in the name of sannyas.

I want the beautiful word `sannyas’ to be taken away from all its old associations, and I want to give it a new meaning, a new fragrance, a new health, a new wholeness. I want you to remember a simple fact: that what is natural is divine, and what is unnatural is evil.

Celibacy is evil because it is unnatural. To follow the course of nature, to remain in a deep contact with all that is natural, not fighting it but in a deep friendship, in a let-go — that is my definition of sannyas.