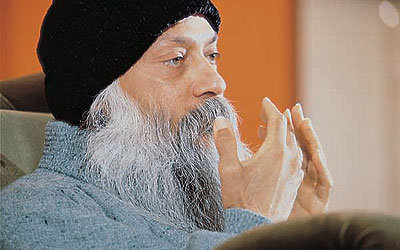 [A sannyasin says he has been feeling very miserable. Last night he stayed up to look after his son who was sick. He has heartburn often and thinks it is repressed anger. Osho checks his energy.]

Osho – Nothing to be worried about…. Just ordinary cycles of misery and happiness. I don’t see that there is really any cause for it. One thing you have to understand about it is that the mind functions in a cycle. There are three cycles in human existence. The first is the physical. It takes twenty-three days to complete, and it affects a broad range of physical factors, including resistance to disease, strength, coordination, and the other basic body functions, and the sensation of physical well-being.

The second cycle is emotional. It takes twenty-eight days to complete, just as it takes twenty-eight days in the feminine body for the menstruation to come. Just now science is becoming alert that even man has a kind of monthly period and that after each twenty-eight days it happens. The feminine period is visible and physical. Man’s period is not visible and not physical; more pyschological, more emotional, but it happens. The emotional cycle governs creativity, sensitivity, mental health, mood, perception of the world and ourselves.

When a woman is in the period, for three, four, five days she is in misery, sad, negative, dull, dead, feeling very low, jumpy, shaken. But women become accustomed to it because it is so visible. By and by they learn that it has to be so, so by and by they are not so miserable. It is an every month thing and so visible, so things settle. But man’s problem is more difficult. The period is there – the male period – but it is not visible and you don’t know where it comes from and when it goes. Right now my feeling is you are in a menstruation period, so for three, four days, you will suffer. This is one cycle. It will be good if you read something about bio-rhythms – a new science that is developing; bio-rhythm. And it will be very helpful for you. This is a twenty-eight days cycle in the body; it follows the moon. So whenever there is moon you will be more happy, and when there is no moon you will be less happy….

And then finally, the third cycle. The third cycle is the intellectual cycle. It takes place over a thirty-three day period. It regulates memory, alertness, receptivity to knowledge and the logical and analytical functions. The first half of each period is positive and the second half, negative. Sometimes you have a period in the negative phase and the others in the positive, and vice versa.

So it has nothing to do – at least about you I am certain – with any cause. Those are just excuses; that boy’s illness was just an excuse. If he were not ill then you would have found something else. So don’t be angry with him. And it has nothing to do with anger. You have just to understand your phases, and you have to be a little more watchful. Start keeping a diary about these negative phases. Within three, four months, you will be able to make your chart, and then you can predict that next monday you are going to be in a bad mood, and then be alert.

In ancient days yogis used to make such charts. The science of bio-rhythm was well-known and practised in the yoga and sufi schools. And these charts were very helpful because if you know that for the first week of every month you become very very negative, then a few things can be avoided. In that first week don’t do anything for which you can repent later on; don’t fight, don’t get angry. The people who are really following those charts will not move out of their rooms. They will not do anything for those seven or four or three days, because whatsoever they do will be wrong. And then you know when your positive mood comes. That is the time to relate, to go to people, to meet, and nothing will go wrong. You will be in a different state altogether.

So start keeping a diary from tomorrow morning. And by diary I don’t mean that you have to write all kinds of details; just the diary of negative and positive moods – morning, afternoon, evening, night – four points. Every day note down how you were feeling for three months; then make a chart. Just look at that chart. When your positive moments are there, those are the moments when you should meditate, love, sing, dance, go swimming, relate to people, do something creative. And you will be much benefited, because suddenly god is available in those moments – you are very close.

When you are in a negative mood then don’t do anything… just the necessary. And remember that the mind will tend to find some cause but don’t look for any cause; the cause is inside you. Watching this way, within six, eight months you will be able to become a witness, and then nothing disturbs. Then you know it is just part of nature – nothing to do with you. Seeing it, you start transcending.

Man is still a part of the ocean, and just as the moon affects the ocean, it affects man. Eighty percent you are ocean water – still: with the same chemicals, the same saltiness, and everything. With eighty percent ocean water you are bound to be affected by the moon; you will be in a rage of energy.

If you don’t use it rightly it can become destructive. For example, if in the full-moon night you can’t sleep then it is better not to sleep. Why not sing, play, dance; why bother about sleeping ? It is not the night to sleep. It is the night to dance, celebrate. Next day, exhausted, you can go to sleep. If you try to sleep and you cannot sleep then it becomes misery.

And my own observation is that people can reach to the highest peak of joy on the full-moon night. They are at the lowest ebb on the no-moon night. So you just watch – I don’t see that there is any problem. Good!