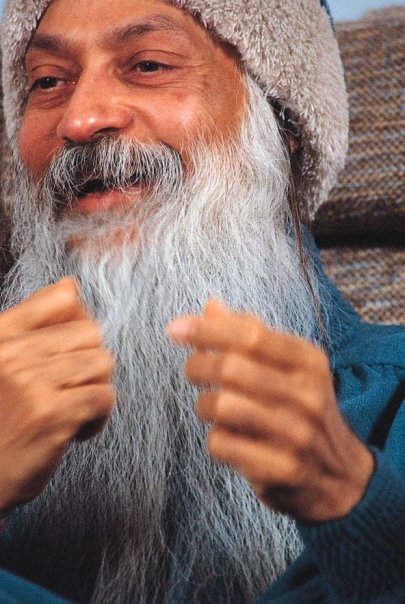 Question – beloved master, i love to do t’ai chi and it has become my daily meditation, but i have a tendency to become too serious about it. can you drive out the monkey?

Osho – Anand Srajan, it is impossible for anybody to drive the monkey out of your mind, because it does not exist; your seriousness is creating it. And nobody can change your seriousness either. It is your life attitude which is making you serious. What is there to be serious about? Existence is a continuous celebration, a festival that knows no holidays. You are serious because for thousands of years people have been telling you that the serious man is a better man, higher man, more evolved than the nonserious. The nonserious have never been taken into account.

But to me the situation is just the reverse. The nonserious one is the one who will come to know the real life and its experiences. Seriousness is closing you, making you hard, making you sad. Seriousness comes from ambition, from desire which you are not being able to attain.

But the religions have paid too much respect to seriousness. I have never come across in any religious scripture of any religion — and there are three hundred religions on the earth — that anybody has paid respect to nonseriousness, to playfulness, to a sense of humor. They all make you dodos.

I have heard… one day as the bishop entered a church in New York, he could not believe his eyes: he saw Jesus Christ standing there. He said, “My god! I thought that prayers are never heard. I never believed that there is any God or any son of God — but what to do with this fellow? Either he is a hippy or he is Jesus Christ. I am in trouble.”
He approached the man and asked, “Can I ask you who you are?”
And the man said, “You have been serving me, spreading my word, and you don’t recognize me!”

The bishop’s heart started sinking: “My god! He is Jesus Christ! And now there is bound to be trouble.”
He phoned the pope in Rome: “What am I supposed to do? In our teaching courses there is not even a single mention that `Jesus will come one day to your church.’ So what has to be done, what is the right course? How should I behave?”

The pope said, “Don’t create trouble for me! It is good that he has come to New York. Do two things: first, the most important, look serious and busy. Who knows, he may be… And second, don’t forget to inform the police.”

Religions have been teaching people to be serious because seriousness creates a certain kind of dullness in your consciousness. Seriousness is not a help. It is poisonous; nobody can take it away, unless you understand… then it will disappear.

A psychiatrist and a friend were walking down the street, and a stranger passing by suddenly kicked the psychiatrist in the shins. The shrink walked on as if nothing had happened. His friend was astounded. “Aren’t you going to do anything about it?” he cried. “Why should I?” asked the psychiatrist. “It’s his problem.”

If the monkey is there inside you, it is his problem! He must be getting tortured with your seriousness and your t’ai chi. Don’t be worried. He himself will be trying to find a way to get out of the mess.

I have heard that three missionaries were caught by cannibals in southern Africa. The chief of the cannibals asked the first, “Which do you want — you can choose — do you want `chi-chi’ or do you want death?”
The man thought about it and he said, “Whatever chi-chi is, it cannot be worse than death.” So he said, “I want chi-chi.”

So he was given the treatment they called chi-chi. He was sexually abused, beaten… and as chi-chi started, he started thinking, “It was better to choose death. These people will kill me by chi-chi, and they are unnecessarily humiliating me.”

And the other two missionaries were watching what was going on. Then the turn came to the second: “What do you want?”
Death is such a dangerous thing… he thought, “One can survive chi-chi, but death you cannot survive.” He also said, “Chi-chi.”

So again the whole game began. All the cannibals were beating him and doing all kinds of stupid sexual perversions — and the poor missionary had come to save them…!

Now the turn came of the third, who was the chief missionary. The chief asked, “What do you think — chi-chi or death?”

He said, “It will be a great mercy if you allow me death. Chi-chi I have seen.”
But the chief said, “This is a problem: we don’t kill anybody before chi-chi, and after chichi nobody survives!”

Now what are you interested in t’ai chi for? Naturally it will make you serious. You will forget laughing, you will forget a sense of humor — a man of t’ai chi has to be serious. And you are asking me to take out the seriousness… and the monkey. The monkey comes in the same package! You become serious and the monkey will come in. And as far as the monkey is concerned, it is his problem — you don’t worry. You just get rid of this chi-chi. Just to deceive you they have changed the name to t’ai chi!

Source – Osho Book “The Great Pilgrimage From Here to Here”