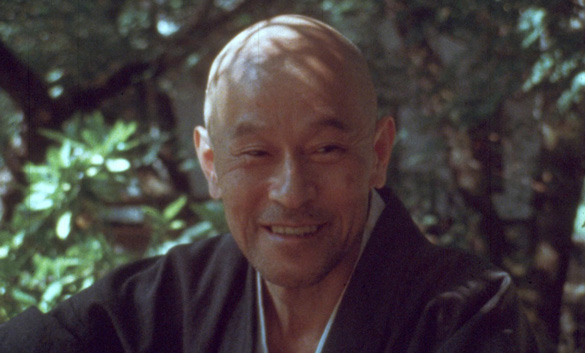 Question – Beloved Osho, Shunryo Suzuki, one of the first zen masters to live and teach in the west, was once asked why he never spoke much about satori, enlightenment. The master laughed and answered, “the reason i do not talk about satori is because i have never had it.” Could you please comment.

Osho – David Hey, Zen in the West is in a very strange context. The master you are talking about, Shunryo Suzuki, must have felt immense difficulty to express himself, because Zen has a language of its own. It has a climate different from any other climate that exists on the earth.

To bring Zen to any country is a difficult task. One has to be ready to be misunderstood. Suzuki’s statement seems to be clear, and anybody who will read it will not have any difficulty to understand it. But whatever he will understand will be wrong.

The master was asked, “Why don’t you speak about satori?” — the Japanese word for enlightenment. And he answered the way a Zen master should answer knowing perfectly well he could not be understood, he is bound to be misunderstood. He said, “The reason I do not talk about satori is because I have never had it.”

The statement is clear; linguistically there is no problem, there is nothing to be understood in it. Suzuki is saying, “I have never talked about it because I have never had it.” Now I will have to give you the whole background, the climate in which the meaning of the same sentence turns into exactly its opposite as you understand it.

Zen has an absolute certainty that no one can have satori or enlightenment; you can have things. You can have money, you can have power, you can have the whole world, but you cannot have enlightenment. Enlightenment is not a thing; it is not possible to possess it. Those who say they have it, don’t have it — they don’t even understand the ABC of it. One becomes enlightened — that’s what Suzuki is saying. There is no distinction between I and enlightenment, so how can I have it? The I disappears completely into enlightenment just like a dewdrop disappearing in the ocean. Can the dewdrop say, “I have the ocean”? The dewdrop is the ocean — there is no question of having it. This is the first thing to be clearly understood.

Suzuki was an enlightened master; that’s why he denied it. If he were not enlightened, but was only a scholar, learned about Zen, he might have felt very embarrassed to deny it. He might rather have lied, and nobody would have been able to detect his lie. He could have said, “I have it, but the experience is inexpressible; it was so simple, that’s why I never talk about it.” But the man really had it. To really have it means you can’t have it; you disappear.

As long as you are, there is no enlightenment. The moment there is enlightenment, you are not. You disappear just like darkness disappears when there is light. Darkness cannot possess light; you cannot possess enlightenment. I don’t think, David, that the statement of Suzuki would have been understood by the people who asked the question and who received the right answer. It needs a totally different context to understand.

The Western education is so much of a nourishment to the ego… in fact the Western psychology supports the idea that a person should have a very clear ego — powerful, aggressive, ambitious; otherwise, one cannot survive in the struggle of existence. To survive, first you have to be, and you have to be not only defensive, because the right way of defense is to offend, to attack… Before anybody else attacks you, you should attack. You should be first, not the second, because to be defensive is already losing the battle.

And because of the Western psychology, the whole educational system supports the idea that a man becomes mature as he attains a more and more crystallized ego. This goes against the experience of all the buddhas, of all the awakened ones. And none of these psychologists or educationalists have any glimpse of what awakening is, of what enlightenment is.

Those who have become enlightened are agreed, without any exception, on the point that the ego has to disappear. It is false, it is created by society; it is not your original face, it is not you. The false must disappear for the real to be.

So remember these steps: first, the false must disappear for the real to be, and then the real has to disappear into the ultimately real. People are living so far away from their ultimate home — they are not even real, what to say about the ultimate? For it, they have to first move away from the ego. They have to experience in meditation their own center.

But this is not the end. Meditation is only a beginning of the journey. In the end, the seeker is dissolved in the sought, the knower in the known, the experiencer in the experience. Who is going to have satori? You are absent; you are non-existent when enlightenment explodes. Your absence is an absolute necessity for enlightenment to happen.

Suzuki is absolutely right: “The reason I do not talk about satori is because I have never had it.” I am absolutely certain that those who heard him are bound to have thought that he had had no experience of satori. That is simply the meaning of what he is saying. Unless there was somebody who had experienced egolessness, and finally selflessness, Suzuki was without fail, bound to be misunderstood.

But he was a man of immense daring, of great courage, to introduce Zen to the West. Not many people were impressed. Many certainly entertained Suzuki’s statements, his anecdotes from the annals of Zen; they thought them strange jokes. But there were a few who understood not what the man was saying, but the man himself. He turned a few people on; he has the same distinction as Bodhidharma who planted the seeds of Zen in China.

And Suzuki was received with joy, because he had brought something which no Christian or Jew was even able to comprehend. He attracted many people of the new generation; a few of them remained true to the master to the very end. Many traveled to Japan just because of Suzuki. Hundreds of Zen classics were translated in Western languages because of Suzuki. Now it is possible to talk about Zen and still be understood, and the whole credit goes to a single man, Shunryo Suzuki.

It has never to be forgotten that words don’t exist without context. If you forget the context, whatever you will understand is going to be wrong. If you understand the context, it is impossible to misunderstand.

Berkowitz was crossing Washington Avenue on Miami Beach when he was hit by a passing auto. Several passersby picked him up and laid him down on a bench. A kindly, silver-haired lady approached the injured man and asked, “Are you comfortable?”
“Ehhh! I make a living,” sighed Berkowitz.

In the Jewish context he could not understand the word `comfortable’ in any other sense than in the sense of making a good living. He said, “Yes.” He has the accident, but he cannot understand the word `comfortable’ in the present context of accident. Perhaps he may be dying, perhaps he is badly hurt, but his context remains as his old mind which
thinks only of money, earning.

This has to be remembered while you are studying Zen — the differences of context. It is said: To arrive at the truth, the German adds, the Frenchman subtracts, and the Englishman changes the subject!

I have heard… You can always tell a man’s nationality by introducing him to a beautiful woman. An Englishman shakes her hand, a Frenchman kisses her hand, an American asks her for a date, and a Russian wires Moscow for instructions!