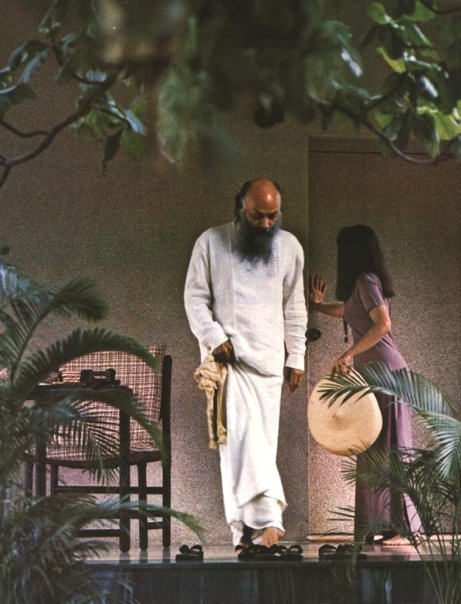 Osho – I have to make you all understand that you must act intelligently. Just the other day, because I told Hasya not to unnecessarily struggle with dropping cigarettes – her whole life she has been smoking – many others who had already dropped, they immediately jumped! And many who had never smoked, they started smoking, perhaps thinking that this is a device towards buddhahood. You are all buddhas, but don’t be idiot buddhas.

Today the whole place is full of tobacco smell. I don’t want this place to be filled with tobacco smell. It has been so clean, and if you, many of you start smoking, you will bring the smell here. So those who have never smoked, simply stop. Those who have stopped and already were out of the withdrawal symptoms, should not start again. It was specially meant for Hasya and Chitten, who have been going through withdrawal symptoms.

So except Chitten and Hasya, everybody has to come back. Use your own intelligence. When I told Hasya to smoke, Chitten had a great smile on his face. I wondered what was happening to him, because Hasya’s withdrawal symptoms cannot affect Chitten. Later on I came to know that he was on the same trip. Just hearing that he is free to smoke was enough to bring a great smile to him – he has not smoked yet, but all the withdrawal symptoms disappeared!

Don’t be unnecessarily stupid. If necessary, it is okay, but unnecessarily stupid, that is a little too much! And remember, I should never smell tobacco in Buddha Hall. Even Hasya and Chitten, they can smoke wherever they want, but before coming to Buddha Hall they will change their clothes, take a shower and wash their mouths.

The cigarette is not a device for buddhahood. It is simply a kindness, not to unnecessarily harass you, but it is not for others to follow. They are already good, there is no need for them to start smoking. It is poison, it is destructive. It cannot destroy your buddhahood, but it shows your unintelligent habits. But if they have been formed a long time ago – for years – it is going to take too much time to throw them away. I will allow you to become a buddha smoking, but this is not the rule, this is only the exception.

Still you will look a little foolish, when you become a buddha with your cigarettes. You yourself will think, ”What am I doing? Being a buddha…”

One man used to come to me nearabout thirty years ago. He wanted somehow to drop his smoking habit.
I said, ”It is not difficult, it is simply a question of determination, a little will. What the cigarette is giving to you – a certain poison, nicotine – that keeps you feeling a certain well-being for a few minutes, meditation can do for twenty-four hours without any nicotine.”

He started meditating, he dropped the cigarettes – not with force. They dropped on their own as his meditation became deeper. Then he wanted to be initiated as a sannyasin.
I said, ”Have you thought it over?”
He said, ”I am absolutely ready.”
He took sannyas, and the next day he came saying, ”You were right. I was going to the market with my wife, and people surrounded us. They started asking me questions: ‘With whose wife are you escaping?’ – because a sannyasin is not supposed to have a wife…”

He tried his best to say, ”She is my wife!”
But they said, ”You are a sannyasin.”

The poor fellow was in a difficulty, so he mentioned my name.
Then they said, ”Then it is okay, because with Osho everything is okay. You can go, but it will be better that you get your wife also to become a sannyasin. Then it will be easier, otherwise some other crowd will beat you.”

So he brought his wife.
I said, ”She has no understanding. She has never thought about it, but it has now become necessary.”

So she became a sannyasin. The third day they were traveling in the train. They had a small child, and people caught hold of them and stopped the train. They called the police saying, ”These sannyasins are trying to escape with somebody’s child.”
They tried hard saying, ”He is our child – ask him!”
They said, ”You cannot deceive us this easily, you must have hypnotized him. That poor boy!”
So they were taken to the police station. The police officer had heard me, had read me. So he said, ”Don’t be worried, I can understand. But the best way will be to let your son also be a sannyasin. Otherwise, anywhere you go you will be in trouble.”

So on the third day the child was introduced into sannyas. I said, ”How many people are you around? Bring them all together – why harass me every day?”
He said, ”I am not harassing, I am being harassed. You were right that I should think twice, but I did not think of all these problems, that people would be so angry.”
So the child also became a sannyasin.

They still come here. They live in Bombay, and some day you may see all the three. Before you start smoking a cigarette, remember: it is going to create unhealthiness in you, in your lungs, and a shorter life. And most importantly, it is taking away your drive, your urgency towards meditation. You relax with your cigarette, then what is the need of the rest that Hyakujo talks about. The nicotine gives a little restfulness. There is no need for any meditation – just more and more cigarettes.

I am not a man who is dogmatic in any way, but I will not put you in any discomfort. If you become sad and dull, and you start losing the joy of life, then it is okay, continue with the cigarettes. But remember, the responsibility is now greater on you to get into meditation. Only if in meditation you can get a deeper rest than nicotine can give you, will dropping cigarettes be easy.

Always interpret whatever I say as my compassion and my love. I don’t want you to be in unnecessarily uncomfortable states. So if I make somebody an exception, it does not mean I am making a rule for everybody. At least in Buddha Hall air, no smoke smell should be here. This you should take as a warning. If I smell tomorrow again the smell, I will immediately go back.