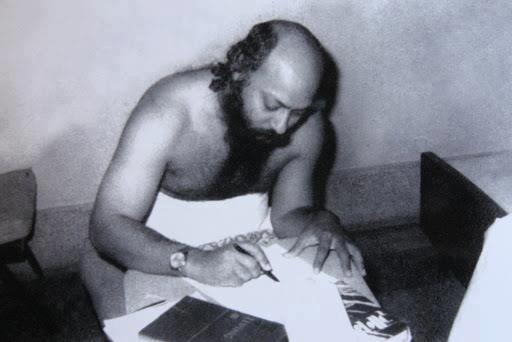 But one thing certainly the Soviet Union needs, which Christianity cannot provide. That can be provided only by Zen. Zen is pure meditation. It has nothing to do with hell, heaven, God. Jesus’ miracles, it has nothing to do with. It does not even talk about any of these things. It simply talks about the science, step by step, of how to enter your own inner world and see the life eternal.

You know that existence never creates a carbon copy, that existence always comes up with absolutely original faces. Nobody is dispensable. Once you are gone, your place will remain empty forever. This gives significance, this gives meaning, this gives you a feeling you are needed by existence. Without you, something will be missing; some place will remain empty and nobody else can fill it.

That’s why yesterday I argued against Regardie, because he wanted to be a “Rajneesh” in his next incarnation. Existence never repeats, and you cannot be anybody else than yourself. That is authentic religiousness. Every individual has his own uniqueness, and that gives him dignity and grace.

I don’t want Christianity or Hinduism or Mohammedanism to enter the Soviet Union because all these religions are of prayer. Prayer is extrovert; meditation is introvert. If you want to allow people, then allow the people whose religion is based on meditation, not on prayer. That should be the clear-cut distinction, a criterion that can be followed without any fear.

What will the poor pope do in the Soviet Union? — just kiss the land! So he can kiss in the Vatican, he has enough land — eight square miles, a sovereign country. Eight square miles is not enough for him to kiss? Go on kissing!

He wastes so much money in kissing different lands. He came to India and kissed the New Delhi airport. I was in Kathmandu — I immediately gave a press conference and told them, “If he wanted to kiss cow dung, we could have sent him a parcel full of cow dung! Why waste eight million dollars in visiting India just to kiss the cow dung?” But cow dung gives you a taste of Hinduism….

What has Christianity done for the whole world? It has created more poverty by preventing people from using birth control methods. Now birth control methods are a hundred percent effective; at first they were not. The pill had to be taken before you made love. Now there is another pill that you can take afterwards; there is no need to take it beforehand. This is far safer. And sometimes the pill disturbs the hormonal system of the woman, so a third pill has come into being which the man can take. The woman need not take anything. Now things are so simple, why go on increasing unnecessary population?

And all Christian priests are insisting for more poverty, for more orphans. The reason is that they need more Catholics, more Christians — from these orphans, from these poor people, they can get new converts. Already the Catholic church has six hundred million people in its fold; still there is no satisfaction. It wants more and more people, at the risk of the whole planet committing suicide! It is because of Christianity — and they have influenced all the religions because it is the greatest religion as far as membership is concerned, the most powerful. Other religions have also followed the same ideas.

Mohammed married nine wives. He was absolutely uneducated; he used to have epileptic fits and he married a woman just for money. The woman was forty years old and he was only twenty-six, but the woman was a widow and had an immense amount of money. She was the first Mohammedan! She turned Mohammed’s epileptic fits into “trances.” In his epileptic fit, he would tremble and foam would come out of his mouth, and he would feel so much trembling that all the blankets in the house could be put over him; still he was trembling. And whatever he uttered in that unconscious state, his wife would write.

Khadija — the woman, who was well educated, super-rich — it is she who has written the Koran, it is not Mohammed. He could not even sign his name. And the Koran has been written over thirty years’ time, because you have to wait for the epileptic fit to come again. Then nobody knows whether Khadija was writing what Mohammed was saying or she was inventing, because it is a very poor scripture. There is nothing much in it.

Mohammedan friends have asked me. “Talk about the holy Koran!” They have been sending me copies, the latest editions, most beautifully printed. I looked into them many times, but I could not find a single sentence worthy to be commented upon. I can criticize, but then all the Mohammedans will be just ready to burn my community!

That’s what the Greek church threatened to do to me. When I was in Greece it was only for a four-week tourist visa. After two weeks… and I had not gone out of the house. The house was on a small island; it belonged to the best film producer in Greece, he was my host. It was just on a hilltop, a direct drop to the ocean — a very beautiful place, a beautiful garden, and I had never gone out of the gate.

But friends from all over Europe came running to Greece and the archbishop of the Greek Orthodox church… which is the oldest church in the world. It is the Greek church which has changed Christianity completely, according to itself. The archbishop threatened the president of the country, the prime minister of the country, and threatened me: “If the government does not deport him immediately I am going to dynamite the house and burn all the people inside — alive.” This is religion!

And I have nothing to do with Greeks. There were at the most ten or twelve Greek friends, whom I have already corrupted, so there was no problem; they were my sannyasins. And he was threatening the government and saying that my stay in Greece would corrupt the morality, destroy the religion.

I said when they deported me, to the world press representatives who had gathered at the airport to take my interview, “This country has the weakest religion and the weakest morality. They have had two thousand years to condition the mind of the country to a certain kind of morality which they think is virtuous, to certain superstitions that they think are religion — and they are afraid of a tourist who is going to be here only two weeks more! If a religion two thousand years old can be corrupted by a tourist in two weeks, it is worth corrupting. It should be corrupted.”

He was threatening me: “I will organize a procession against you.”
I informed him, “I will enjoy it!” I enjoy all kinds of things….

But the procession never came, so I asked Amrito, my ambassador in Greece — a beautiful woman, used to be a model, once was chosen to be the beauty queen of Greece. I love beauty. I love everything that is beautiful in this world. The flowers, the faces, the stars, the moon, the ocean — everything. Beauty is my religion.

She laughed, she said, “You won’t believe — they are the oldest women, ancient women, those whose one foot is in the grave and one foot in the church.”
I said, “How many women listen to this archbishop?”

She counted. She went there — only six women were listening to his thundering sermon! Of course he could not bring a procession of six old women, it would have been really a great circus. I had told my people, “When he comes, we should join the procession!”

That old idiot wanted to burn all my people who were living with me — just for two weeks! What has Christianity done for the world that you are asking me why I don’t want to allow Christianity to enter the Soviet Union?

I love the Soviet Union because it is a great experiment. It is a milestone in the history of man. Of course it is only half, but still — half is better than nothing. The other half can be raised on top of it.

The buddhas don’t lead you, they simply indicate the way. You have to follow your way alone, because nobody can go inside you. The buddhas can point to the place, but you have to go there. And it is good that nobody can go inside you; otherwise politicians would have reached before any buddha! It is your privilege, your absolute privilege and freedom — nobody else can enter there.

But if you go, you will start growing in a new dimension — vertical. Just as all animals move horizontally… at a certain point in history some animals, according to Charles Darwin, stood up vertically. That’s how man was born: from the horizontal animal, walking on all fours, he started walking on two feet, and two hands were free for the first time. These two hands have created all science, all technology — the houses, the roads, the electricity, the television. Everything that you enjoy, everything that is needed for humanity has been created because these two hands were free. No animal can do these things: all four legs are engaged in walking.