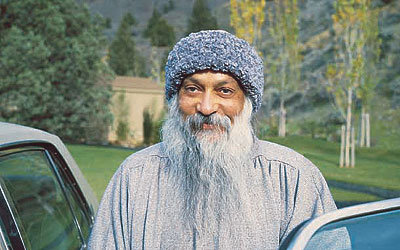 Osho – Unless you are in a deep communion with the master, everything else that goes on in the name of spirituality is nothing but spiritual entertainment.

They go into the synagogue and they come out the same — just as they go into a cinema hall and come out the same, it is just an entertainment. And it is very fulfilling to the ego. Going to the cinema hall is not fulfilling to the ego, but going to a temple, to a church, to a gurudwara is tremendously ego-fulfilling. And what are you doing there? Nothing has happened to your life. For their whole lives people go and come back the same — no transformation, not even a slight change in their hearts. It is entertainment and nothing else.

I have heard that three rabbis were talking about their synagogues. The first said, “My synagogue is the most up-to-date. We are not old-fashioned. People are allowed to smoke in the synagogue, drink, enjoy. And since we have allowed smoking and drinking, the synagogue is full; otherwise it used to be just a few old women. And there is no need to sermonize them because nobody is listening, they are engaged in their own gossipping — so no gospels, only gossippings.”

The second one said, “This is nothing. We have gone far ahead, you are living in the bullock-cart days.”
The first rabbi said, “What? My most up-to-date synagogue and you say I am living in the bullock-cart days? What have you done?”
He said, “In my synagogue all these things have been allowed. Now we have allowed people even to bring their girlfriends, boyfriends — dancing, lovemaking, everything goes. The crowd is so big that I have to give three shows; people are waiting outside. Never before have people been so religious.”

I have heard: One Sunday, in a Catholic church, the priest is taking confessions. They have a booth, a small window that the priest remains behind, and the person sits on the other side of the window. From there he confesses, and the priest gives him a punishment.

The priest had a great friendship with the rabbi and they both wanted to go for golf. The rabbi finished his things and rushed to the church. When he reached there, confession was going on and there was a queue. He went inside the booth and said to the priest, “We are going to be late!”

He said, “You do one thing. I will just change my clothes and get ready — you just sit here and take a few confessions.”
The rabbi said, “But I have never done it in my whole life! This business we don’t do.”
The priest said, “Simply do as I am doing — just watch one or two cases.”
One case came and the priest said, “Five dollars fine.” Five dollars were taken in; the second came — “Ten dollars fine.”

The rabbi said, “My God, we were thinking that something spiritual was happening. It is pure business! I am going to open a booth in my synagogue. This is cheating! You just go, I will manage. Now there is no problem. I was thinking that you have to give them spiritual advice, and somebody may notice the difference of voice and….”

Unless you are in communion with a master, everything is entertainment. You can call it spiritual and enjoy a deep ego-fulfillment, but it is nothing. It is corrupting you, exploiting you, deceiving you, destroying you.