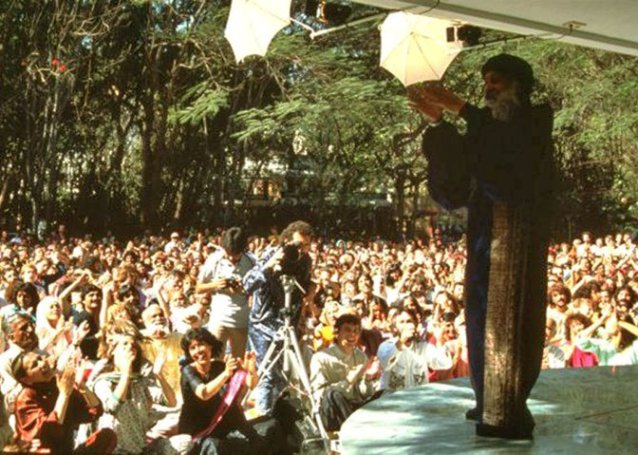 Question : You tell me to follow my feelings, and when i finally dare to and am feeling much freer and simpler and happier, you say i am immature. What does it mean?

Osho : IT is from Madhuri. It means exactly what it says: you are immature. What is immaturity? Whatsoever you are doing, you are doing almost unconsciously. Yes, I say be spontaneous, but I don’t mean be unconscious. I mean be alert and spontaneous. By ‘being spontaneous’ you immediately understand to become a driftwood; so whatsoever happens, whatsoever and wheresoever the mind leads you, you are led by it. You become accidental. Immaturity makes a man accidental; maturity gives man a direction.

Maturity comes from a Latin root, MATURAS, which means: to be ripe. A fruit is mature when the fruit is ripe, when it has become sweet and is ready to be digested, can be eaten, can become part of anybody’s life. A mature person is one who has come to know what love is, and love has made him sweet.

Now what Madhuri is doing is not love, it is just sexual fantasy — so one day moving with one man, another day moving with another man. This can be very destructive. Remember, what I say has to be understood very accurately, otherwise my sayings will not be helpful. They will become harmful.

It happened: Mulla Nasrudin came home. His wife asked him, “What happened, Nasrudin, when you asked your boss for a raise today?”
“He was like a lamb,” said Mulla Nasrudin.
“Really? What did he say?”
“Bah!”

Please listen to what I say carefully, and don’t give it your own interpretation. Don’t distort its meaning. Be spontaneous, but you can be spontaneous only when you are very aware. Otherwise you will become an accident — one moment going to the north, another moment going to the south. You will lose all direction. A spontaneous man is ready to respond to each moment. Sometimes some may see that he is moving to the north, and sometimes others may see that he is moving to the south, but his inner direction remains absolutely certain. His inner direction remains arrowed. He may have to adjust to circumstances, but once adjusted, he again gains energy, momentum, and starts moving towards his direction. He has a feel for the direction, but that feel comes only when you are very, very alert. Otherwise, just spontaneity will reduce you to being animals.

The doctor on an ocean liner notified the steward that a man had died in the stateroom number forty-five. The usual instructions to bury the body were given. Some time later the doctor peeped into the cabin and found the body still there. He called the steward’s attention to the matter, and the latter said, “I thought you said cabin forty-nine. I went to that cabin and noticed that one of them was in the bunk.’Are you dead,’ says I?’Pretty nearly,’ says he; so I buried him.”

Yes, I had told Madhuri to be spontaneous, to move according to her feelings. But I have been insisting continuously to do everything, but always remember that awareness is a requirement, a basic requirement — then do whatsoever you want to do. If there is something you are doing for which awareness becomes a hindrance, then don’t do it. If there is something you are doing and awareness does not become a hindrance to it but on the contrary helps it, do it.

It happened: A worried woman went to see her doctor and told him that her husband appeared to have no virility, and had no interest in her whatsoever. He gave her a prescription, saying “These will help him. Next time you and your husband are having a quiet meal together, just slip a couple of these pills into his coffee and they will make him spontaneous. And then come and see me again.”

Two weeks later she went to see her doctor again, and he asked her if his remedy had been successful.
“Oh yes, doctor,” she said. “Absolutely marvelous. I slipped the pills into my husband’s coffee and after two sips he began making love to me.”
The doctor smiled. “Fine. No complaints then?”
She said, “Well, there is one. My husband and I can’t ever show ourselves in that restaurant again.”

“You tell me to follow my feelings and when I finally dare to and am feeling much freer and simpler and happier, you say I am immature. What does it mean?”

Let me tell you one anecdote: Abdul the Arab was marooned in the desert. His camel had sat down and flatly refused to get up. At long last another Arab dropped by, and Abdul told him his problem.
“I can fix that,” said the second Arab, “only it will cost you five shekels.”
“That’s cheap at the price,” said Abdul, “so you go ahead.”

So without further ado the Arab crouched down by the side of Abdul’s camel and whispered a few words in its ear. Suddenly the camel leapt to its feet and took off across the desert like a greyhound. Abdul was amazed and delighted. “That trick is worth more than five shekels,” he said.
“I know,” said the second Arab, “and I want five hundred shekels from you before I tell you the magic words — you have got to catch him.”

That is only half the story: now you will have to catch him…now five hundred shekels are needed. Unless the second Arab utters the same mantra into Abdul’s ear, he cannot catch the camel.

Madhuri, your desires are running like greyhounds. It was easy; it cost you only five rupees, but now you will have to catch your camel and it will cost five hundred rupees. It will be more arduous. To just move with desires one always feels simple, because one becomes almost like an animal. It is almost felt like happiness because there is no tension, no responsibility. You don’t care a bit about the other person. Now the camel has to be caught.

But I wanted to see what you do, and I have seen what you are doing. Now become more alert. Bring a discipline to your life, a direction. Become more caring, more loving, more responsible. Your body has to be respected; it is the very shrine of God. You are not to treat it the way you are treating it; it is disrespectful. But it will be hard, I know. But I create situations in which hard things have to be done, because that is the only way to grow.

One thought on “Osho on Spontaneous action and Immaturity”