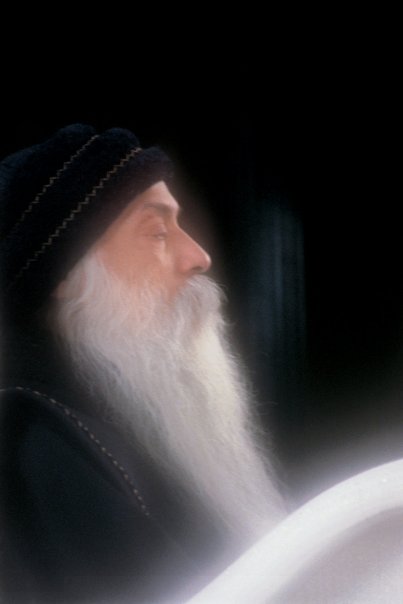 Question – Beloved Osho, there is a word that has often touched me deeply. By just remembering it from time to time it feels as if it can healwounds, and it brings stillness and contentment. thisword is suchness.would you like to talk about suchness?

Osho – Sadhan, it is certainly one of the most significant words in the whole language. It started with Gautam Buddha. The language that Gautam Buddha used was Pali. It has died; now it is no longer a living language. But a few words were so important that they have remained alive in other languages.

The Pali word for suchness… because suchness is only a translation of that word; in English there has been nobody who has used that word or experienced the taste of that word. The Pali word is tathata. And because of the word tathata, one of the names of Gautam Buddha is tathagata. He was the first to use that word and give it so much meaning and depth.

The English word suchness perfectly translates the Pali word tathata. If you understand its meaning, just the very understanding of the word is certainly going to bring great healing to you, great silence, great peace. But try to understand from Gautam Buddha, because he is the original source of that certain meaning.

If somebody came to Gautam Buddha and said, ”I am blind”…. if the same man had gone to Jesus Christ, perhaps he would have done a miracle and given the blind man his eyes. But I say unto you that Gautam Buddha did greater miracles. They are so great that most often you have completely missed their meaning. If somebody came and told him, ”I am blind, in both my eyes”… Buddha would say, ”I am not blind, but I have seen the whole world, and the real joy and the peace that I have found has been found with my eyes closed. Accept your blindness as a blessing.

”I have to close my eyes, your eyes are already closed. And even if people who have eyes close their eyes, images which they have seen with open eyes go on disturbing them. You are fortunate, your blindness is a blessing in disguise. Accept it as a gift of existence. This is the way existence wants you to be. This is the meaning of tathata – that it is perfectly alright that you are blind; nothing is missing, just you have to learn how to use your blindness for your spiritual growth.

”People who have eyes have to learn how to use their eyes; you have to learn how to use your blindness. And I say to you that you are in a better position. Relax, and feel grateful to existence that it has not given you all the distractions which are possible when you have eyes. You are already without any distractions, without any images. Your insight is already calm and quiet.”

Because this was Buddha’s attitude about everything, tathata became his very foundation of religion. When Buddha’s teachings were translated into English, they were not able to find right words for many things. But it is a great coincidence that suchness has the same flavor as tathata. You are blind – such is the case. Accept it in its total suchness. Don’t try to be miserable about it, because millions of people have eyes, but what have they done with their eyes?

I would like to tell you one story about Jesus which was not compiled by the Christians, because it is a very strange story. When they were compiling the New Testament, three hundred years after Jesus’ crucifixion, they left out many things for the simple reason that it was so difficult first to explain them, and second to avoid contradictions. This is one of the stories that has been left out, but it has been preserved by the Sufis.

The story is… Jesus enters into a town and he sees a young man going after a prostitute. His eyes are full of lust, his whole presence stinks of passion. Jesus prevents the young man and says, ”Are you aware of what you are doing?”

The young man suddenly becomes angry and he says, ”I was blind. It was you who cured my eyes; otherwise I was not aware that there are prostitutes. You are responsible for it. By giving me eyes you have given me so many troubles. When I was blind, everybody was sympathetic to me. When I was blind I had no responsibilities. People were very loving and very kind – they were providing food, clothes, shelter. By giving me eyes you have taken away all their kindness, all their sympathy, all their love. Now I have to work the whole day to earn my food. And what do you suppose, when I see a beautiful woman and my passion arises? – what should I do?”

Jesus had never thought about it, that a blind man would be so angry because his eyes are cured. Jesus was very sad. Leaving the young man because he had no answer for him, he entered the town and he saw another man who was completely drunk and had fallen in the gutter. Jesus shook the man and asked him, ”Is life given to you to waste in such ugly ways?”

The man opened his eyes and he said, ”Right – you are the man who made me alive; I had died. And now there are so many problems and so many anxieties that without drinking I cannot even sleep. Why did you make me alive again? I had died! And who gave you the authority? I had not asked you.”

Jesus was really shocked. He was thinking he was doing a service to people, and things have turned out to be just the opposite. He did not go into the town; he felt so miserable. He went out of the town to meditate and to pray to God, ”Give me clarity – what should I do?” As he was going out of the town he saw one man was trying to commit suicide by hanging himself from a tree. Somehow he prevented him.

The man said, ”You have come again. Why are you continually after me? Once before I committed suicide – you are a strange fellow. I am tired of life, I don’t want to live, but you saved me. It would be better if you save others. I don’t want any savior, just let me die. And remember that I don’t want to be revived back to life. You did it once, but now I am preventing you myself.”

Certainly if you understand it, it will give you tremendous insight and be a great help in your meditations. It will help you not to resist existence, not to fight against the current, but just to go with the current. Allow the river to take you to the ocean.

Sadhan, you are right when you say, ”There is a word that has often touched me deeply. By just remembering it from time to time it feels as if it can heal wounds, and it brings stillness and contentment. This word is SUCHNESS.” Just try it in moments of turmoil, in moments of pain, in moments of misery. In the darkest nights of your life, just try, ”Such is the will of existence, and I am part of it. I will relax with it. If this is the will of the whole, so it will be.”

Sufis have preserved the story because Sufis have a similar attitude to Gautam Buddha. If you listen to a Sufi mystic you will be surprised about one thing. In each sentence he uses certain words, and they are, ”God willing.” If you ask him, ”Can I come to see you tomorrow?” – just a simple thing – he will say, ”You can come, God willing. It is not in my hands. What is going to happen tomorrow I cannot predict. As far as I am concerned, I am ready, you can come. But remember, neither I can decide for tomorrow, nor you can decide for tomorrow. We can only hope.”

Gautam Buddha has no God; his approach is more sophisticated. If somebody insults him and his disciples become angry, he says to them, ”You don’t understand, such is the case. That man could not do anything else. If you had been brought up in the same conditions, in the same situations, you would have insulted me also. And I can see so clearly that he does not have any bad intentions. All that he could do, he has done. And all that I can do, I am doing. He can insult me;this is his suchness. I can still feel love and compassion for him; this is my suchness.”

The suggestion of Sadhan is so great, it can be helpful to you all. Just remember – not as a word but as a feeling – suchness. Then there is no grudge, no complaint, no desire that things should be different than they are. A tremendous acceptance arises. This acceptance is real and authentic religiousness.