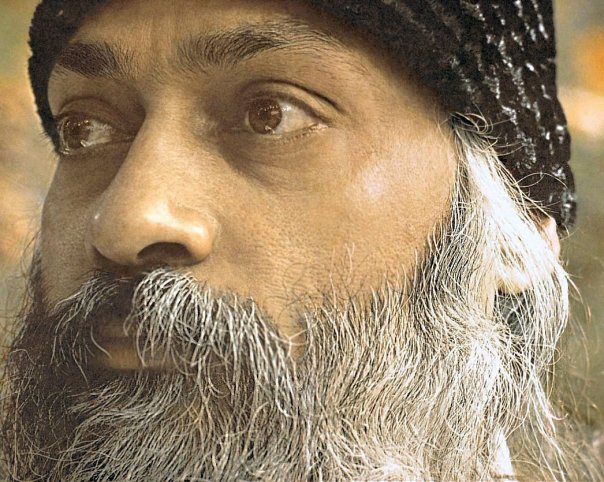 Osho : When Mansoor attained godhood he declared, “Ana’l Haq! am God!” His Master, Junaid, said, “Keep quiet. I know, you know, that’s enough. No need to tell it to anybody — otherwise you will be in danger and you will create danger for me and for other disciples also. Yes, I accept,” said Junaid, “I can see you have attained. But let it be a secret between me and you.”

And somebody asked, “Before they cut your tongue, we want to know — why are you smiling?”

This is the miracle. It does not depend on God, it does not depend on anybody else. It depends on your experience. al-Hillaj proves himself to be far closer to truth, just by his simple action. He is not grumbling, he is not saying to God that “This is not right that they are behaving in this primitive way with me and you are simply silent.” He is not talking about God at all.

He is simply enjoying the whole thing and laughing at the stupidity of people. “You are punishing somebody else. And I have always been telling you that you cannot punish me, you cannot even touch me. Punishment is not the question at all.”

Osho : When al-Hillaj Mansoor, who was killed finally by the Mohammedans… just like Jesus, but in a far worse way. They cut him piece by piece. But this happened later on, when he became enlightened and declared: “Ana’l haq — I am the truth.” And Mohammedans cannot forgive anybody saying this. Only god is truth. Calling yourself truth, you are indirectly calling yourself God. But he was not calling himself God. He was simply saying, “I am the truth.” And he was not claiming any monopoly on it.

He was saying, “You are also the truth, it is just that you don’t know it. I know it.” But this came later on. When he first went to his master, Junnaid… it was a very sad affair. His family, his wife, his children, his old parents, his friends, his neighbors — all loved the young man. He was so beautiful, so joyous, just his presence was a light.

He had been visiting all kinds of masters. Finally he decided to leave the family and to go to Junnaid, who was residing just outside the village in the forest. Junnaid was a very famous master. So out of the town the family came, friends came, wife, children, neighbors, to say goodbye, to give him a good send-off. And he went towards the forest… but again and again he looked back. Those people were still standing on the boundary of the town.

Finally, when he was entering into the forest, he looked for the last time. They were still standing, far away; he could not figure out who was who. And then he reached Junnaid’s hut. He knocked on the door. Junnaid said — from the inside; he has not seen the person yet — he said, “First leave the crowd outside and come alone!”

What crowd? He looked all around, there was no crowd. He opened the door.

Junnaid said, “You did not follow my order! Leave the crowd outside and then come in.”
But he said, “What crowd? I don’t see anybody. I looked everywhere — there is nobody.”

He said, “You are looking outside — look inside. The whole crowd is present. Your wife, your children, your family, your parents, your neighbors, your friends — everybody is present. Just close your eyes: that is the crowd you have to leave outside. Get out! When you are finished with the crowd, come in.”

It took three years for al-Hillaj Mansoor to sit outside till he was finished with the family, with the crowd, till he became utterly silent. He forgot completely to enter into the hut. Three years is a long time. He had forgotten the family, and he had also forgotten the master. There was no need now, he was completely fulfilled.

Exactly at that moment Junnaid came out and said, “Come in now.”