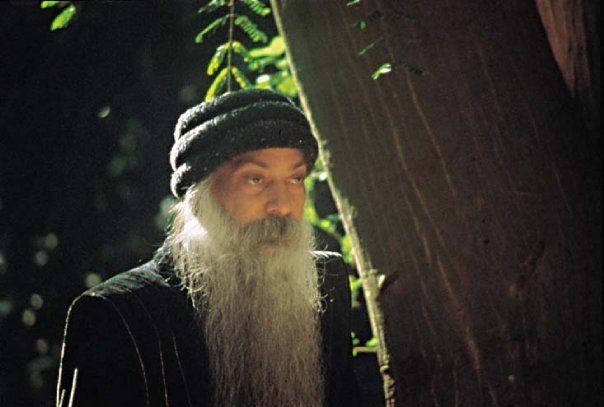 Osho : Anutosh Samat, no one can bring these two things together. You will have to choose one. My suggestion is, watch everything with equal distance, with equal aloofness. Sadness, anger, jealousy, happiness, joy, love — remain aloof from all and just be total in your watching.

Your watchfulness should be total. You be identified with your watching because that is your nature, that’s what you are. There is no question of disidentifying with it; even if you try you cannot succeed. Your intrinsic nature is simply that of a witness. A single quality of awareness makes your whole being. So watch everything as if it is a cloud passing by.

If you really want to get beyond the mind and all its experiences — sadness and joy, anger and peace, hate and love; if you want to get beyond all these dualities, you have to watch them equally, you cannot choose. If you choose, you will not be able to watch those which you don’t want to choose. So the first thing is, just be a watcher.

It will be a little difficult in the beginning to watch those things which are so sweet, so beautiful because watching makes you distant from every experience that is passing by like a cloud. You cannot cling. Up to now that’s what you have been doing: clinging to that which you think is good and trying to get away from that which you think is ugly and miserable. But you have created only a mess of yourself. You have not been successful.

The best way is to be totally a watcher, but if you find it difficult there is an alternative. But that is harder than this, it is more difficult than this one — to get identified with every cloud that moves. If there is misery, then become absolutely miserable, then don’t hold anything back, just go with it to the very end. If you are angry, then be angry and do whatever stupidity it suggests to you to do. If some crazy cloud passes by, be crazy. But then don’t miss anything. Whatever comes to you, be totally with it in that moment, and when it is gone it is gone.

But this is a dangerous path. I have never heard of anybody surviving. And you know perfectly well what kind of things come to your mind. Sometimes you feel like barking, then get into it, bark like a dog. And whatever the world thinks, let them think. You have chosen your path, you will get free … perhaps totally free. Enlightenment and freedom from the body will come together! But it is a bit dangerous.

People may try to prevent you, because nobody knows what kind of things come to your mind. Your own people — your friends, your family, your wife, your husband — may try to prevent you. There are many people all over the world whose families have forced them into insane asylums, because that was the only way to protect them. And this happens everywhere.

Just now the world has come to know that England’s royal family has been keeping two persons, belonging to the royal family, locked in a basement for forty years in Buckingham Palace. And this was not released, this was not allowed to be known, because even to accept that royal people can go mad is humiliating. Royal blood?

For forty years they have been hiding the facts about where these people had disappeared to, and just now it has leaked out. Then they had to accept that they have been keeping them in a basement because they were behaving in an insane way, and they did not want the world to know that members of the royal family of England are behaving insanely.

But this goes on happening. In my village, the richest family had one person locked inside in their house his whole life. Everybody knew that something had happened to the person because he suddenly disappeared. But it was sixty years before, so by and by, people had forgotten. I came to know just by chance, because one of the sons of the man who was kept in chains was my student. Because he was from my own village, he used to come to see me often, and one day I just asked him, “I have never seen your father.”

He became very sad and he said, “I cannot lie to you, but what is happening to my father is such a heavy weight on my heart. Because my family is the richest family of the village, they don’t want anybody to know what they are doing with my father. They beat him; he has been encaged almost like a wild animal. He cries, shouts, screams, but nobody listens, nobody goes near. Just from the top, food is dropped to him. Everything that he needs is dropped from the top. Nobody wants even to face him.”
But I said, “What has he done?”

He said, “Nothing special, he was just crazy. He used to do things which are not normal.” For example, he might go naked into the market. Now, there was no harm … he had not done any harm to anybody, he had just been walking naked in the marketplace, but that was enough for the family to force him. And they made him more and more insane. This was not going to help, this was not a cure, not a treatment.

“Doctor,” said the housewife, “I have come to see you about my husband. We have been married for over twenty-five years. He has been a good husband, happy, contented and very devoted to me, but since he came to see you about his headaches he has been a different man. Now he never comes home at night, he never takes me out anymore, he never buys me anything nor gives me any money. Hell, he never even looks at me. Your treatment seems to have changed his entire personality.”
“Treatment?” said the doctor. “All I did was give him a prescription for a pair of glasses.”

Because he was not able to see exactly … now for the first time he has seen the woman. So just a pair of glasses can make a dramatic change — the whole personality, his whole behavior. Otherwise he used to be a very loyal husband. And this will not be such a small thing, just a pair of glasses. If you start getting identified with everything, you will be in difficulty from every corner. It is better to choose the safer way; all awakened people have chosen that way. It is without exception the sanest path towards enlightenment.

Osho – The mind is a chattering box. You cannot stop it