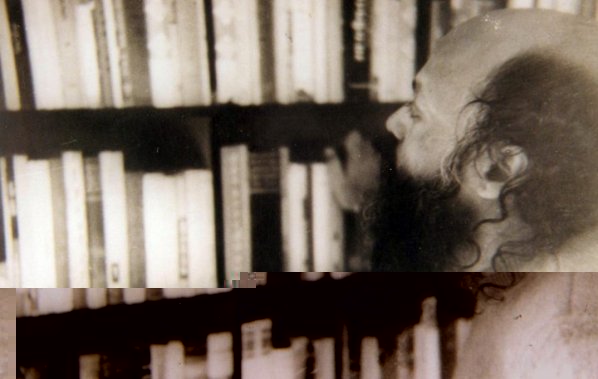 Osho – Truth will not be obtained from my talk – please understand this well. Nobody’s words can convey Truth. If a thorn gets embedded in your foot, you can use a second thorn to remove it; but once the thorn is out both become equally redundant. My words will not deliver Truth. but they can act like the thorn to remove the thorn of illusion of knowledge that you hold as your own. When this happens, my words will have served their purpose and become equally useless.

Words, be they from anybody, do not convey Truth. But if words delete words; if words are erased; and if the mind is emptied so that words have no hold on it, then of itself the mind attains Truth; for Truth is nowhere outside It is within each one of us. Once the mind gives up its habit of Looking outward, Truth is not difficult to attain. As long as we look to gurus, we look outside; as long as we hold on to shastras, we are looking outward As long as we cling to the cognition of other’s words, that which is attained in the No-Word, silent states remains unknown.

A poet once went to the seashore. It was early morning: The sun’s cool radiance filled the sky. The breeze came with a touch of the waves. The joy of the scene filled the poet’s heart too. Delighted he began to dance. Oh the bliss, the joy!… but his thoughts went back to his beloved, lying in in a hospital. How he wished that she were here beside him to share this beautiful morning! He was a poet, so the scene affected him more. Tears welled up in his eyes but soon he wiped them away. ”What if I filled a casket with this beautiful morning and sent it to her?”

He brought a box and lovingly opened its lid to the wafting breeze and the dancing rays. He then sealed it with care and sent ;t to his beloved, explaining to her how much he had missed her in those lovely surroundings, but that he was sending them to her in a box. The letter reached: so did the box but when she opened it there were no rays of the sun, no cool breeze, no glory of the morning that her lover had described. It was only an empty box. What is at the seashore cannot be carried in a box; and also there is no way to fill the experience of the Ocean of Truth in the chest of words.

Only words, blank and empty, remain. That which was experienced at the seashore is left far behind. Those who reach the shores of Truth, they too, long to convey the joy of their experience to those they love; so that those who could not come that far may also get a glimpse of that wonderful experience. They fill their chests with words and send them to us. The Geeta, the Bible, the Koran reach us; but that which they tried to send, remains far behind. Their compassion is unquestionable but heir words fail to convey Truth.

Words have never been adequate. If the beloved had held the box to her bosom and danced, we would have called her insane; but if she had caught the meaning behind the box, she would have run to the seashore. Then she would have partaken of the joy of the dancing waves and the cool breeze. But this is possible only if after getting the message, she is willing to cast the casket aside and set out towards the place from where something was attempted to be conveyed.

Those that likewise cast the shastras aside and proceed towards the source of the shastras, find themselves one day, at the shores of the Ocean of Truth. But we are such fools – we made a fanfare of the Geeta and are completely oblivious of the source from where Krishna sent the message of the Geeta. So also, have we done with the Bible and the Koran.

If Krishna and Christ, Mahavira and Buddha, happen to look at us, they will shed tears of anguish. They will say: ”We tried to send them a whiff of the sea-breeze but they have clung to the words of our message and remained where they were!” If they had their way, they would snatch all the books and throw them into the sea. But even if Krishna were to snatch the Geeta away from us, we would catch him by the neck – for what have we besides the Geeta?

Dostoevsky of Russia, wrote a book: The Brothers Karamazov. In that he says that after eighteen hundred years since his death, Jesus thought that the time was ripe for him to re-visit the earth. There were churches erected in every village to preach his message; there were priests and monks with the cross dangling from their necks. Almost half the world had turned Christian! He was sure of a tumultuous welcome.

So one Sunday, Jesus descended into a village and stood under a tree. People were returning from the village church; the morning mass was over. They were surprised to see a Christ-like figure standing under the tree. Who is this man dressed like Jesus? He must be an actor, they thought. They gathered round him, full of curiosity and began to question him: ”Your acting is perfect. You look exactly like Christ.”

”But I AM Christ,” said Jesus. They laughed aloud; one threw a stone, another a slipper and they all danced round him, calling him insane. One, out of pity, told him to go before the priest caught him.
”Your priest? He is my priest. Don’t you recognize me? I am the one to whom you pray every morning.”

”We shall worship you as you deserve, if you do not make yourself scarce quickly!” they told him. Jesus in his compassion forgave them; perhaps they really did not recognize him, but the priest was bound to, for he sang his praises all day. Then along came the padre. The noisy crowd became silent as he approached. Then one by one, they touched his feet – such is the world: it will stone God but it will prostrate before those who make business out of Him.

”This is blasphemy!” exclaimed Jesus.

”Keep quiet,” said the people. ”If the priest hears you, he will feel insulted.” This drew the priest’s attention. ”Who is this rascal?” he asked, ”Bring him to me.”

”You too do not recognize me?” Jesus asked the priest, ”And you wear my cross around your neck!” But Jesus overlooked the fact that the cross he was hung on was made of wood, while the cross that hung round the priest’s neck, was made of gold. Was ever a cross to hang a man by made of gold? And it is the man who is hung on the cross and not the cross on the man!

”This man looks like Satan himself!” proclaimed the priest, ”Our Jesus came to earth but once. There is no need for him to come again. Now we are here to look after his work.”

So Jesus was locked up in the attic of the church, He was shocked! This was the same kind of treatment he had received eighteen hundred years ago. ”Will I be crucified again?” He wondered. The priest came to visit him in the middle of the night. He fell at his feet and begged forgiveness. ”I recognized you alright, Oh Glorious One! But we are constrained to deny you in the market-place. You need not take the trouble of coming again. We are carrying out your work with all sincerity. Business is good, and if you come there is bound to be confusion. We have barely got things going smoothly and you come again! Please understand, we cannot acknowledge you in public. Not only that, we might have to resort to the same tactics to disown you, as we did eighteen hundred years ago. Pleas forgive us; we are helpless.”

The same will be the fate of Krishna or Mahavir or Mohammed, if they chose to come again We little realize that those whose words we cling to, have clearly warned us not to; for Truth is not in words. Truth is present in the ”word-less” silence, where all thoughts are absent.

Truth will not be in my words, nor in the words of anybody else. Then why do I speak? – to snatch your words away from you. If my words, like the thorn. can pick out the words from within you, I will have attained my end. Then you will be freed from my words as well as the words within. Then the mind, devoid of words, is ready to set out towards Truth. It is a matter of great regret, that instead of grasping the essence of the message of those who come to liberate us, we merely catch hold of their persons.

Buddha had forbidden his disciples from making his statue, but today his statues outnumber those of anyone else; In fact the Urdu word for ”statue” is derived from the word Buddha and it has come to mean any statue. There are Buddha idols to the tune often thousand in a single temple n China… and Buddha bad warned: ”Do not worship me!”

We are strange people! We catch the one who says ”Do not hold on to me” – catch him all the more firmly, lest he slips away! The more we like a person, the more we tend to cling to him for fear of losing him. This tendency has made slaves out of us. If we lose our hold on the old ones, we find new ones to hold on to. If Mahavir and Krishna, Buddha and Rama are getting out of hand we create a Gandhi and begin to cling to him: we must have someone or the other to cling on to. We do not want to stand on our own two feet. I wish to declare that only that person is qualified to call himself a man who, discarding others, stands on his own feet.

Only he can take hold of himself who casts aside all outside help. Remember: he who clings to others has no faith in himself. Because he finds himself weak, he tries to derive strength from others. Lack of faith in one’s self, becomes faith in others. He who has faith in himself, places his faith nowhere else. The irony of it all is: he who cannot hold on to himself, how can be hold on to another7 How can he sustain another. when he has no power over himself?

Faith in one’s self is religion, and not faith in others. God has given to each person all that he has given to everybody. Each one of us has that in him which has manifested itself in others – some Ram, some Buddha, some Mahavir, some Gandhi. What becomes manifest is present in seed within all. But when I say ”leave them,” I have no enmity towards their person. How can there be? Such wonderful people – what can I have against their person? What reason do I have to find fault with them? All I mean is: as long as you hold on to their person, you will never be able to find yourself; and he who fails to find himself, is disqualified to enter the temple of God.