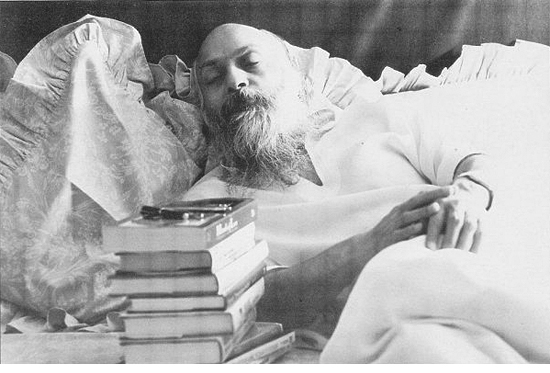 [A sannyasin recently returned has written a letter to Osho saying that whilst in the West, everything was fine except that he kept waking in the early morning feeling restless and disturbed. First he began to feel that he was falling into depression; then the sadness became anger, aggression.]

Osho – I received your letter. It is something important and it is good that you have not taken any medicine, the medicine would have been a disturbance. It would have been comfortable, convenient, but it would have disturbed a very deep process that has started.

Yes, it was good that you didn’t take any and felt that. It is something from the deepest basement of your being that is being released. And it can be released only in dreams, because if it is released when you are awake you will go crazy, you will go mad. So it is a natural safety device that all that is very horrible is thrown out of you when you are fast asleep. It is just like when you are being operated on: anaesthetic has to be given to you. The operation can be done when you are awake but it will be too horrible, it will drive you crazy, and it will be too painful.

Surgeons have learned it from nature; nature has a built-in process: whenever something is too horrible or too painful the person immediately falls into a swoon, becomes unconscious. You can bear pain only up to a certain limit. If the pain becomes more than that, you simply become unconscious. So in fact, to call any pain unbearable is not right because the moment it is unbearable, you are not conscious; if you are conscious it is bearable. It is a built-in phenomenon, you have nothing to do with it. No pain is unbearable; when it is unbearable you simply pass out.

And that’s the phenomenon with dreams also: much rubbish is being thrown out in dreams and when the unconscious really starts pouring the rubbish which has been accumulating for so many lives, down through the centuries, if you can see it, you will never be sane again. So it has to be released in dreams. But even when it is released in dreams, in the morning you will feel bad, mm? because the dream also happens in you.

You are not fully conscious but a part of your being goes on watching it, a part of your being never falls asleep. It is a very tiny part but that much remains as a link between your consciousness and your unconsciousness. That part goes on watching, that part remembers; otherwise you would not be able to remember your dream. That small, tiny part remembers in the morning that this was the dream. It remembers fragments: a few things it forgets, a few it remembers, because it is very tiny. It is as if you are watching the whole film through a keyhole; you only know the fragments.

So in the morning it will be difficult and you will feel bad, but it has to be accepted; soon it will change. And the fundamental change has happened: first it was sadness, then it became anger; that is a natural process. Now the anger will also dissolve. And once the anger has gone, the dream has done its work; you have vomited out your garbage from the unconscious. Then you will feel really unburdened. So something beautiful has started. And it is good that you have come because here it will be easier for things to settle.