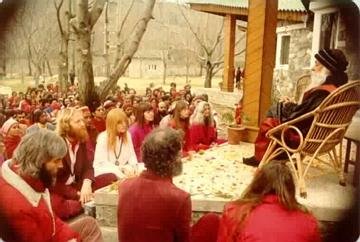 Question – Beloved Osho, What is the difference between religious scriptures like the gita, the koran, the bible, etc. and the upanishads?

Osho – First, THE UPANISHADS are not religious scriptures. They are poetic expressions of those who have known. They are not Hindu, they are not Buddhist, they are not Jaina; they don’t belong to any religion. They are the experiences of individuals sitting at the feet of their master — and when the experience overwhelmed them they danced, they sang, they uttered strange statements. And these were not made by their minds; it was almost as if they were just hollow bamboos. Existence has made them flutes; it was existence itself singing a song. That’s why no upanishad carries the name of its writer.

Because of this… you will be surprised also to know that the whole KORAN consists of Hazrat Mohammed’s statements, the GITA consists totally of Krishna’s statements, but each upanishad consists of many peoples’ expressions — anybody who had reached to that beyond and allowed the beyond to descend through him.

THE UPANISHADS have not bothered to collect the words of one person. Each upanishad contains the words of many enlightened people, and without any signatures. Words have never been so golden. Words have never taken such high flights, and yet the people who allowed them to happen have remained anonymous. This is so beautiful, immensely beautiful, because they knew that, “We have nothing to do. We have just been passages. Something has come through us.”

One upanishadic rishi, one upanishadic seer — the name, of course, is unknown — is reported to have said, “If there is any mistake in my statement, that is mine. And if there is any truth, I cannot claim that it is mine. The truth belongs to the universe; the mistake belongs to me, I was not such a good vehicle.” These were rare people, unique human beings, the very salt of the earth.

I would like my sannyasins to become this very salt of the earth again. It is because these are not religious scriptures, that’s why there is no religion following THE UPANISHADS. These are the very few books which contain the greatest quantity of truth and have remained unorganized. There is no organization around them; there cannot be. Because of the very methodology there cannot be a church, there cannot be a pope or a shankaracharya.

I love someone, but I cannot make an organization of it. And when I leave this body I will leave in heritage my wealth, my house, my land, everything — but I cannot leave my love in heritage. These UPANISHADS are pure love, so there have been no successors, no priests, no followers. These books are the most pure in the whole world, absolutely without any pollution. They have remained just the way they were expressed. Nobody has fought because of THE UPANISHADS.

I have heard…. A crazy man had applied to be given a job on a ship. He was interviewed. The captain and the high officials of the ship asked him, “If the ocean is in a turmoil and there is danger to the ship, what are you going to do?”
He said, “Simple…”.
Whenever a situation like that happens, they drop heavy loads by the side of the ship, to keep the ship anchored. Those heavy loads are called anchors.
So the man said, “No problem. I will just drop a big anchor.”
The captain said, “But if another great turmoil comes — because these things happen in a chain, a great wave — what you are going to do?”
He said, “The same — another anchor. And if the third one comes, another anchor, and the fourth one comes, another anchor.”
The captain said, “Stop! First tell me, from where are you getting these anchors?”
The man said, “You are just as crazy as I am. From where are you getting all these turmoils? From the same place, I go on getting the anchors.”

One fallacy, one false statement, one fictitious idea gives birth to another fictitious idea. First you ask who created the world; immediately God comes in — one anchor. But somebody is bound to ask, “Who created God?” — another anchor; a bigger god created this smaller god. But the questions cannot stop. You have started a fictitious thing; now there is no way to stop. You will have to go on creating bigger gods, and the person will have to go on getting bigger anchors.

Hence, every upanishad ends with om shanti, shanti, shanti. That word shanti means absolute silence. Beyond that silence there is nothing, and there is no need. It brings total contentment, absolute blissfulness, ultimate ecstasy. THE UPANISHADS are the only free, absolutely free books as far as religious books are concerned. All religious books are imprisoned — Hindus have their prisons, Mohammedans have theirs, Christians have theirs. Nobody has dared to imprison THE UPANISHADS for the simple reason that those UPANISHADS are of no use as far as the priesthood is concerned, creating organization is concerned, exploiting people is concerned, giving false beliefs is concerned. Those UPANISHADS are dangerous; it is better to keep them aside.

The moment a book becomes a holy scripture it becomes poisoned. Then it is nothing but a strategy to make more and more slaves. THE UPANISHADS cannot be condemned for doing any ugly thing to humanity. They have given their fragrance, they have blossomed, they have shared their joy — and with such beauty, such clarity — and without any loopholes, so that it is impossible to make them religious scriptures. They are truly religious. They are not scriptures, they are truly spiritual. In the whole of history there are only a very few books which have remained uncontaminated by the cunningness of human mind. THE UPANISHADS are those few books.