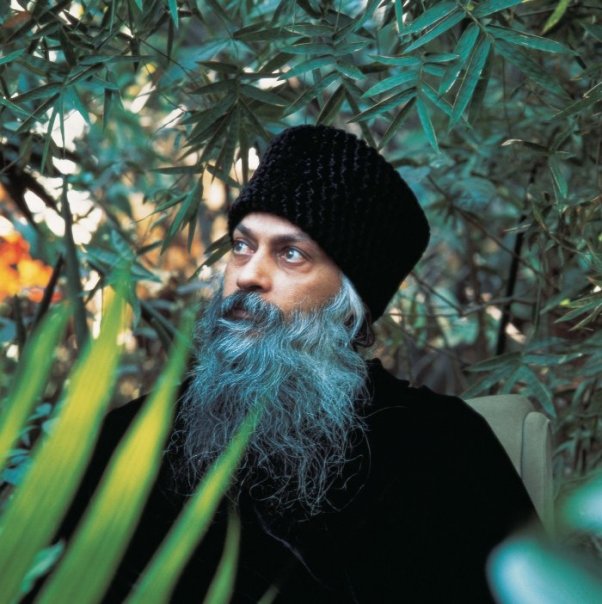 Instead of just a physical body, a tree has two bodies, the physical and the vital. Some energy current is running, and sometimes a tree is more alive and sometimes less alive. Now, even scientists are ready to agree that when someone is near a tree who loves the tree, the tree is more alive. And when someone is near the tree who doesn’t love it, the tree is sad and less alive.

When the gardener comes in, the whole garden is happy. And it is not just a poetry; now, it is a scientific fact. It has been a poetry always, but not it is not a poetry at all; it is a scientific fact. When a person who loves a tree is nearby, the tree is different; and now that difference can be detected by machines. It is more alive; it feels something more — love is flowing. it is vice versa also. If you can love trees when you are under them, you are more, because it is reciprocal. When you are near a flower, you are not just the same. If you have love, then you have an opening, and the flower and you become deeply related in a communion.

This vital body can be purified, and when it is purified it becomes transparent, and then you can look beyond. How is it purified? it is purified by PRANAYAMA. It is purified if you can have a deep breathing system. Less carbon dioxide inside your lungs, and more oxygen inside you — the more vitality you will create. The vital body can also be purified by pure vibrations. In a crowd you are creating many impurities for your vital body. That’s why, whenever one comes back from a crowd, one feels a bit less, less than oneself. Going out of the crowd, far away from man into the nature, one becomes more alive, because up to now there ae no sinner trees, no sinner oceans, no sinner sky.

But man has divisions, so in a crowd you are sucked! Your energy has been sucked. You fall down to a lower level. But there are some people — a few, very few — with whom you can feel that you have been refilled; you have been filled, you have been vitalized. To be in the company, in communion, and communication with someone with whom your vital body is charged, recharged, is what is meant by SATSANG — is what is meant to be near a master. There need not be any verbal communication; there need not be any communication at all outwardly. Just to be near and intimate… just to be open and near, and your vital body increases; it begins to be more — it begins to be richer and purified.

So seek company where your vital body becomes transparent. And sometimes it happens that even a dead master can help; even the place, the bodhi tree, can help. Buddhists have tried to save this tree continually for twenty-five centuries — that same tree. It is not just infatuation; it is not just superstition; it is not just a memorial, mm? There are subtle reasons, more significant reasons to save this tree; Buddha has been near it once, and the tree has absorbed something of the buddha. The tree has been in a very deep relation with the buddha; the tree has a subtle buddhahood itself. Now, it vibrates with a different vibration. No other tree on this earth vibrates like that, cannot.

It is a rare tree; it had a rare opportunity: Buddha has walked around it for days and for nights. Buddha has been lying, sleeping, sitting…. And Buddha could not help loving; and Buddha could not help being compassionate. And the tree was a constant companion; and the tree has imbibed the very spirit. And still today THIS tree is totally different! When you are around it, and if you are receptive, in a subtle way you are again in the intimacy of Buddha himself.

So remember this, remember this continuously: avoid all that which destroys your vital body. And much IS destructive. In a cinema hall it is not only the film which destroys you; rather, deeply, the film is relevant, but the whole crowd destroys you more. And it is a particular crowd — it is not just a crowd, it is a particular crowd — with a particular type of mind, with particular stone bodies. They destroy you more. it is not the film really, the film cannot destroy you so much, but the crowd around you…. And continually for three hours, they are in a very rapt attentive mood — it is very dangerous because you become vulnerable. For three hours continually, without blinking the eyes you are vulnerable! Anything can penetrate you, and all around, just bad vibrations — they go inside.

When you are out of a cinema hall, you have a very much lessened vital body, coming out from a temple, you have something plus. So be aware, not only of the physical body and its purification, be aware of the second, vital body also.