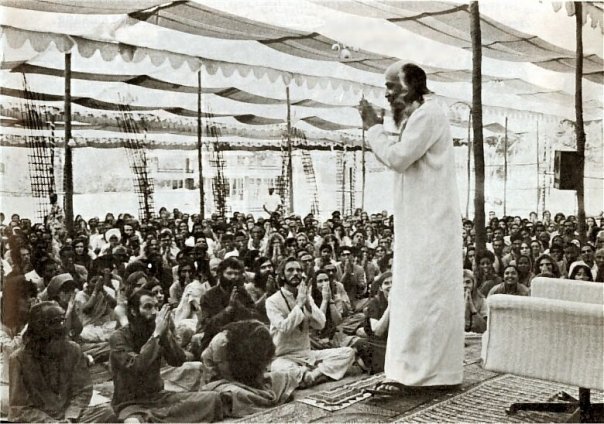 The mirror simply reflects without in any way judging, appreciating, saying anything about what is reflected in it. And once the thing is gone, the mirror is empty again. Zen has been described by the great masters as the empty mirror. The mirror does not cling to something because something beautiful is passing by. It does not catch hold of the sari…”Where are you going, sweetheart? Let us go for dinner.”

I have told you yesterday about the great TV potato movement. On the way back, Anando told me that the news has just come that now in New York, great hotels are giving special service to TV potatoes. Because they cannot leave their chairs, they just have to phone the hotel and the hotel prepares whatever they need and brings it to their chair, where they eat and continue to look at the television. But they have to be members.

That movement is going to spread all over America and Europe and maybe Japan. It is really a non-political, non-religious, very special movement — nothing like it has ever happened before. And people are wearing badges saying that they belong to the Couch Potato Movement. It is a great respectability; not everybody can afford it. Seven and a half hours per day of watching television is a basic requirement. Only idiots can do it.

I call television the “idiot box.” Television goes on supplying all kinds of nonsense; television is becoming a great problem. It could have been a great solution; it could have been a great instrument in educating people. But on the contrary, it is destroying people. Nobody reads, and if nobody reads you can’t think that there will be born again a Leo Tolstoy or Fyodor Dostoevsky or Anton Chekhov. You cannot conceive of there being great poets, great philosophers; nobody is ready to read.

It can be used in a very great way — to educate people for peace, for love, to educate people for music, for dance. Thousands of dimensions are possible that television can make available. You need not travel around the world, you can just sit in your chair and the television can bring the whole world moving before you — the Taj Mahal, and Ajanta and Ellora, and Bodhgaya and Khajuraho in all their detail, with all kinds of information. It can become a living experience, because reading is one thing; seeing is another.

On the night of the full moon, nearabout nine o’clock, the Taj Mahal has such a dreamlike quality that you have a tremendous urge to touch it and feel whether it is real or you are imagining it. In the daytime, the same Taj Mahal looks ordinary — nothing special.

But television is bringing people to a primitive state. Nobody is reading great novels; nobody has time. I have come across people who have not heard even the name of Tolstoy, because it is not on television. They have not heard the name of Dostoevsky. They don’t have any idea what a great novel or a great poem is. They are fed with junk and they collect that junk.

And the problem is that these people will never think of meditation, because you cannot see the television with closed eyes. You can eat your food… People are making love looking at television! What kind of love must these people be making? One is really surprised at the ingenuity of human beings.

The television is on from morning until midnight. Television has become the whole world. All that you know is television. And all the great art, poetry, novels, dramas — they have completely disappeared. Who cares for books?

In America, people purchase only paperbacks, because they are cheap and you can look here and there and leave them in the airplane. Nobody wants to purchase a hardbound book because it is heavy to carry and it is costly to throw away. Book lovers have disappeared, and with them, great books with aesthetic value are completely gone.

People are falling into a primitive state. Certainly, these people become very gullible. Constantly, these are the faithful people, faithful Christians. Whatever the television goes on saying…”This is the best chewing gum” — you start chewing that gum because if television is saying it, it can’t be wrong. And not one television — every television, from all directions the same advertisement, the same chewing gum. And the same beautiful woman is saying to you, “How great is this chewing gum. You have to purchase it!” And if you are a member of the Couch Potato Club you just phone the store, give your number, and the chewing gum will be supplied to you! Now television is ruling people’s minds.

Meditation has become almost non-existential. You don’t have time to meditate, because meditation means sitting silently without doing anything and the spring comes and the grass grows by itself. Sitting silently for a few moments is impossible. The television — you cannot miss this football match! And people become so much involved and identified that they shout, they jump up and down in front of their television sets because their side is winning and they have to give moral support.

I have seen a person throw his television set on the floor because his side has lost the football game! I asked him, “What are you doing? This is not the fault of the television set.”
He said, “I’m feeling so angry, I could do anything.”

So much identification… And meditation is just the opposite — no identification. You simply sit with closed eyes and you have a natural, biological television screen in your mind. And it brings great things to you! You just watch and you will see Sophia Loren… but don’t judge. Don’t even say hello. She will come and go, you just wait. Just be patient. Don’t ask her to join you for dinner at the Blue Diamond.