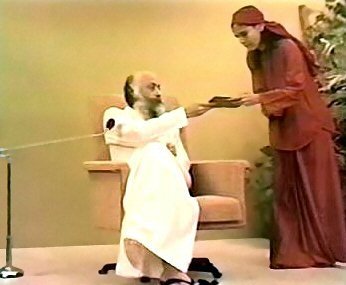 Question : Why has there never been a single Woman Enlightened Master?
Osho : A woman cannot be a Master — it is not possible. When a woman arrives she becomes a Mistress, not a Master. The fulfilment of a woman is love. The flowering of a woman is love. Mastery is not the goal of the feminine mind; they don’t become Masters, they become Mistresses. To be a Master is basically a male effort.

Meera says ‘I am a mistress to you. My Lord’ — a mistress to Krishna, to God himself. She sings the song of the glory of her Lord, she dances. If somebody can catch something from her, it is overflowing; but she cannot be a teacher. She is surrendered, her surrender is absolute. Yes, if you are in her company, you will learn what surrender is… but you will have to learn, she will not teach. A woman cannot be a teacher.

The same phenomenon continues… as it is there on the biological level, it remains on the spiritual level. Biologically, a woman is ready to receive the sperm from the man she loves. The man cannot become a mother, he can only become a father. He can trigger the process: the woman will become the mother, she will carry the child in her womb for nine months, she will nourish the child with her blood and her being, she will be carrying the pregnancy. The same happens on the spiritual level too.

All the great disciples in the world were women. Buddha had thousands of disciples, but the proportion has always been the same: three women, one man. So was the proportion with Mahavir. He had forty thousand sannyasins: ten thousand men, thirty thousand women. And so was the case with Jesus.

The really devoted people around him were not the men but the women. When he was crucified, all the men escaped, there was not a single man. All those so-called ‘apostles’ had all disappeared, but the women were there. Three women were there: they had no fear, they were ready to sacrifice themselves.

When Jesus was taken down from the cross, it was not by men — those disciples had gone far away, and one or two were there but they were hiding in the crowd women took down the body. And it is very significant that when Jesus appeared after three days, resurrected, he appeared first to Mary Magdalen, not to a man.

This is very significant. Why? What about those twelve apostles? Why to Mary Magdalen? And she immediately recognised him, and she rushed to him and she said ‘So, My Lord, you are still alive!’ And when Jesus appeared to the disciples, male disciples, they would not recognise him, they thought ‘It seems tricky. How can this man come back?’

It is said that when he appeared before two disciples, male disciples, he walked with them for hours and they would not recognise him. And they continued talking about Jesus and Jesus was walking by their side. They were a little puzzled about the appearance of this man — he looked like Jesus but how could he be? ‘Just appearance? — one should not be deceived by appearance alone.’ For two hours they walked together.

When they went to an inn, all three sat there to eat their dinner and when Jesus broke his bread, THEN they recognised. Very materialistic mind. Suddenly they saw… because Jesus’ every act, his every gesture, was his, authentically his. Now they recognised because he was breaking the bread in the same way that they had seen Jesus break bread for years — then they recognised. But for two hours, the presence was not recognised. Magdalen recognised immediately.

When she went to tell the male disciples that Jesus was resurrected, they laughed. They said ‘Woman, you are hallucinating.’ And they laughed and they said ‘This is how women always are — imaginative, dreaming, romantic. Now look at this foolish woman. Jesus is dead. We have seen him die on the cross with our own eyes.’ But she cried and she said ‘Listen to me. I have seen him.’ But they would not listen.

And let me tell you this, that as far as this division of male and female is concerned, the female mind is more blessed. Because the real thing is to receive the truth, the real thing is not to give it that is secondary. And a woman is always more total than a man. Whenever she receives the truth, she becomes luminous: her whole body, her whole being shows it; she carries an aura.

Have you not seen a woman who is pregnant, how beautiful she becomes? Her face glows, she is carrying a new life within her. And this is nothing compared to a woman who really becomes a disciple. She is carrying God himself within her. Her glory is infinite. So don’t be worried why women don’t become Masters. There is no need. If you can become disciples, that is natural and you will always remain true to nature.