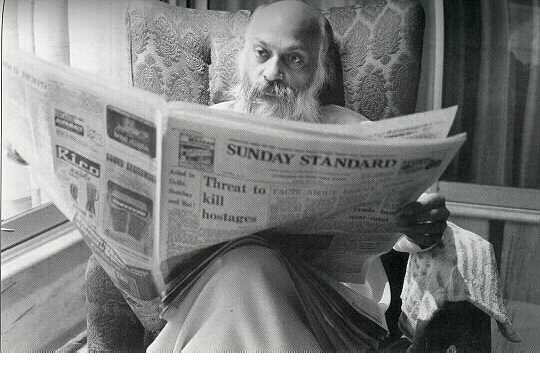 [Another sannyasin, leaving, says he worries about small things, like where I’m going later in the day or my parents and going home. He feels it cuts him off from taking part in Osho and in the ashram.]

Osho – Continue to worry a little, there is no hurry. Mm? you have not yet worried enough. Go deep into your worries, just really go madly into your worries. That is the only way to get out of it: one has to suffer it. Suffering liberates. You want to get out of it without getting into it; that won’t be possible, you have to pay the price. The way is through, remember. Never escape from anything. If this worrying is happening then it must be something essential for your being to go through. This is what I call acceptance, trust.

A child worries about his teddy-bear and a grown-up laughs at it; but the child has to become grownup first before he too can laugh at it, and that is the only way he can become a grown-up. If the child listens to the grown-ups and thinks that this is not good; he is worrying about the teddy-bear which is just a toy, such a small thing… he should worry about great things: god and enlightenment and he is worrying about a teddy-bear. What kind of a fool is he?… Then the child will get into more of a mess, because god is meaningless and enlightenment does not mean anything to him. If you put enlightenment on one side and the teddy-bear on another, he will choose the teddy-bear. And I think I am perfectly with him – he is right!

So whatsoever you are worrying about is natural at this stage. So worry! Nothing to be worried about – worrying…. Worry! Accept it. Play with this teddy-bear a little more and soon you will come to a point where it disappears of its own accord; you need not drop it. If you have to drop it, it will come back, because dropping it will mean violently. forcibly, dropping it. The work was not yet complete, you were not ripe yet. For one or two days you may remain enlightened and then you will fall again. You will be holding your teddy-bear and you will say, ’To hell with god and to hell with enlightenment; I don’t want them, I don’t care about them!’

You can drop those cards but sooner or later you will come back. In fact the more worried you become about Israel, the more you will feel that it is better to play cards. Just to forget all about Israel you will have to play cards! Just do whatsoever comes natural to you. I respect nature and my respect is absolute. Relax and worry… and things will change.