Osho – Anything that becomes an imprisonment is Wrong 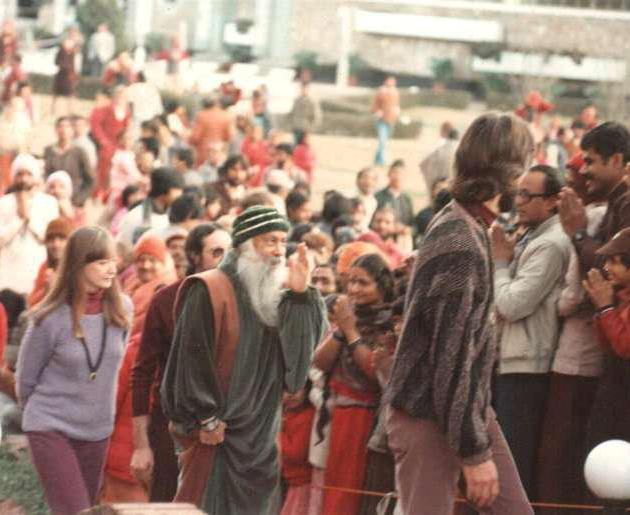 Question : I am aware of a dichotomy within me: when i am near you, i am drawn towards you and am conscious of being a thirsty seeker. When i am away from the ashram i just have a good time and feel deliciously unholy. Is something wrong?

Osho : Nothing is wrong! It is as it should be. That’s what I would like it to be — exactly, precisely. This is what I am trying to teach you: don’t be serious about holiness. Be playful, take it as a fun. It is the greatest fun there is — but it is fun. Once you become serious, you will become a victim of some church or some priest. Once you become serious you are already ill.

When you are near me, flow with me, be with me. When you go to the river, swim with the river; but there is no need to swim in the market. Then you will look ridiculous. In the marketplace move into the market, become part of the market. Retain the capacity of fluidity. Don’t gather a character, a rigid structure around you. Remain capable of moving from one polarity to another; that is what life is. Don’t get frozen. There is no dichotomy.

This is the beauty of life, that it comprehends the opposites. While you are with me be with me, enjoy this search. At home, sipping your tea, or smoking, enjoy the tea, enjoy smoking. Nothing is unholy in it. In fact, the definition of ‘holy’ is: to be whole. And to be whole means to comprehend the contradictions. Don’t be just the day, be the night also. Don’t be just the light, be the darkness also, because darkness has its own beauties; you will miss them. And you will only be a half-person if you don’t have any night in you where you can go and relax. If you are simply serious, then you will remain in the head, hung-up. But if you can become non-serious also, then you can move into the heart.

The heart is a non-serious playfulness. The head is very serious. You should remain capable of flowing. That capacity to flow is to be religious. When you go into the temple, you become a part of the temple; when you go to the world, you become part of the world. But wherever you are, you are always capable of moving into the opposite. If you cannot do that then you become a dead thing. Only a dead thing cannot move to the opposite. A dead thing is a fixed character.

I have heard: A great Zen Master died, and another Zen Master who had always been the opposite polarity to this Master, went to follow the dead body to the cemetery. There were thousands of people in the funeral procession. The man who had always remained the enemy of the Master was there. Somebody asked,’Why have you come? You were always antagonistic to him.’ The man laughed. He said,’It was part of being holy — I was the opposite of him, and he was my opposite. Between us two, we were creating life. People were moving from him to me, from me to him, and between us there was a conspiracy: we were creating life. Structured, frozen people… we were melting them. Now I will miss him tremendously.’ And later on when he saw so many people, thousands following, he said,’This is really wonderful! In the wake of one living person, so many dead people are going!’

Life is not a fixity. It is not like rock, it is like river — rivering, flowing. It is a process, it is not a thing. If you understand me, I am here to make your whole life holy. So whatsoever you do, enjoy it totally and don’t create the dichotomy. The dichotomy is of the mind; you are creating it. There is no problem at all. What is wrong? If you feel deliciously unholy, perfectly good. Don’t become a holy man, otherwise you will miss wholeness and you will never be holy. Remain capable of being unholy also. Then holiness and unholiness become your two banks, and between the two flows the river which belongs to neither bank, which is always transcending and going far away and far away.

Don’t get caught in a character. Don’t become holy, don’t become unholy. A saint is dead, a sinner also, but not a man who can move between the two with no difficulty, who can move easily between the two, as easily as you come out of your house and go in. You feel cold, it is a winter morning — you come out to sun yourself. And then it becomes hot, the sun rising high — you move in, you go into your house. There is no difficulty in it. The difficulty will arise only if you are paralyzed. Then you cannot come out of the house; you are paralyzed. If somebody carries you out somehow, outside of the house, then you still cannot move because now you are paralyzed there.

Don’t be paralyzed; remain alive. Don’t become a dead thing. And the only way is: every day, die to the past so that you can be alive here-now. Go on dying to the past. Never carry the past around with you, otherwise you are carrying a great imprisonment around you; a great prison surrounds you. I am not concerned about whether that prison is made of gold and decorated with diamonds, or if it is a poor man’s prison, just a dark cell. Whether it is the prison you call ‘saint’ or the prison you call ‘sinner’ does not matter. A prison is a prison, and you should not be a prisoner. Be free. Don’t create any problem out of it.

I would like to tell you a story. Many centuries ago, a temple of higher knowledge was being built on a hill overlooking the Nile. The man who would become its chief teacher wanted a suitable proverb to be inscribed over the front door. He thought about it many times as the work progressed. The morning fina]ly came when the foreman needed to have the selected proverb, so he asked the teacher for it.’Please come back in an hour,’ requested the teacher,’I will then have it for you.’ While thinking about it, the teacher wandered near a skilled workman who was gently correcting the work of a young man. The teacher heard the older man make the encouraging remark’There is another way.’ Over the centuries, as troubled students and visitors entered the temple, their first lesson was inscribed over the door. It read: There is another way.

You ask me how to get rid of this dichotomy? I tell you, there is another way: there is no need to get rid of it — accept it, enjoy it. Don’t try to choose; remain choicelessly aware. Then the whole life is holy, and the whole earth is God’s temple. Then nothing is wrong.

My definition of wrongness is: anything that becomes an imprisonment is wrong. And anything that remains freedom is right. Freedom is right, imprisonment is wrong. So remain alert, because each moment you are creating a past, and if you are not alert the dust of the past will go on gathering around you. As you clean your house every morning, every evening go on cleaning your inner consciousness, every moment. Only then can you remain fresh, like a fresh flower, a virgin-ness, a mirror which can reflect, which has not gathered any dust around it.