Osho on Zazen – Just because of zazen, monasteries came into existence 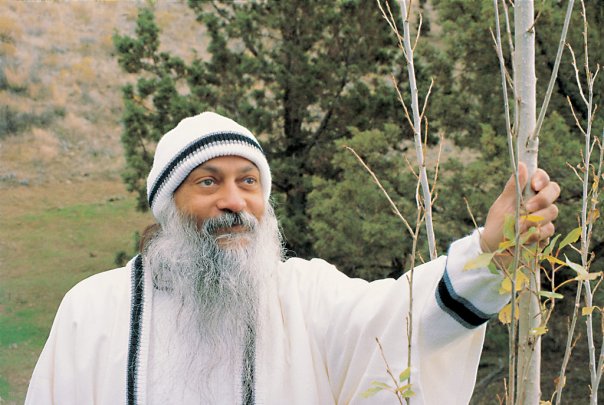 Buddha started speaking in the language of his province, Pali. In Pali, dhyan changes its form a little bit. It becomes jhan. When Bodhidharma reached China, jhan again changed, into Chinese; it became ch’an. And when the school of Rinzai took the same message to Japan from China, the word ch’an came very close to the very original Pali, jhan. It became in Japan, zen.

I am reminded of a story. Twenty-five centuries ago it was a great coincidence that in Greece there was Socrates and in India were Gautam Buddha and Mahavira, and in China there were Lao Tzu and Chuang Tzu — all expressing the existential truth, indicating towards it. It is very strange that suddenly, all over the world, there were at least six people fully awakened. Their words may be different because their languages are different, but their indication is to the same moon. That is absolutely certain.

Dhyan means looking, either outside or inside, without thinking — just looking straight forward. Your eyes become only a mirror. The mirror never says anything to anybody. Neither does it condemn the ugly nor does it appreciate the beautiful; it is simply non-judgmental. Dhyan is, exactly, a non-judgmental state of mirror-like consciousness, just seeing and not saying anything. Then seeing becomes total. And in that seeing is the truth, is the good, is the beauty.

Because of this phenomenon, in the East there is no equivalent word for `philosophy’. In the East the word that has become equivalent is darshan, but darshan refers to a totally different dimension than philosophy. Philosophy means love of wisdom. It is love of knowledge. And darshan means just the opposite: not the love of wisdom or of knowledge, but of seeing. Darshan means seeing. Dhyan is the method, the path; and darshan, seeing the truth with your own eyes, is the goal of the whole Eastern effort.

What is zazen? Zen is, just once or twice a day… in the early morning when the sun is rising and the birds are singing, you sit silently by the side of the ocean or the river or the lake. It is not something that you have to do continuously. It is just like any other activity. You take your bath — that does not mean that for twenty-four hours you have to continue taking a shower. Zazen exactly means that: taking a shower continuously.

Zen is a periodic effort to see the truth. Zazen is a twenty-four hour, around-the-clock remaining aware, alert, in the state beyond mind. Your activities should show it, your words should show it. Even your walking should show it — the grace, the beauty, the truth, the validity, the authority.

So zazen is an extension of Zen around the clock. Just because of zazen, monasteries came into existence. Because if you are living an ordinary life of a householder you cannot manage to contemplate, to be in the state of Zen twenty-four hours a day. You have to do many other things. And there is every possibility that while you are doing other things you may forget the undercurrent.

So monasteries came into existence. The society decided that the people who want to go deeper into their being are doing such a great experiment for the whole humanity, because if even one man becomes a buddha, with him the whole humanity rises a little bit in consciousness.

It may not be apparent. It is just like when the Ganges… a big river, so big that by the time it reaches to meet the ocean its name, from Ganga, becomes Gangasagar, “the ocean of Ganges.” It becomes oceanic — so vast. As it moves into the ocean, the ocean certainly rises a little bit. The ocean is so vast that even hundreds and thousands of rivers never create a flood in the ocean, but certainly even a single dewdrop raises the level. At least you can comprehend it: a single dewdrop losing itself in the ocean, and the ocean is something more than it was before — one dewdrop more.

The people of those days were certainly more subjective, of more clarity that the real evolution of man is not in developing machines, technology; the real evolution has to happen in the consciousness of man. His consciousness has to become a pinnacle, an Everest, a peak that rises high above the clouds. If even a single man succeeds, it is not only his success, it is also the success of all men — past, present, future — because it gives a clear-cut indication that we are not trying; otherwise we could also be buddhas. Those who have tried, have become. It is our intrinsic nature.

The society supported the monks, supported the monasteries. There were thousands of monasteries with thousands of monks who were not doing anything. Society allowed them — “We are engaged in production. We will provide you with food and clothes. You go totally into your effort of reaching the highest peak of consciousness. Your success is not going to be only your success. If thousands of people become buddhas, the whole humanity, without any effort, will find a certain rise in consciousness.”

This was a great insight. And society took over the burden of thousands of monks, of thousands of monasteries; all their needs were fulfilled by the society. Today, that society has disappeared because today even the concept that you are a hidden buddha has disappeared. A strange idea has caught humanity, that every man is an island. And that is sheer nonsense. Even the islands are not islands.

Just go down a little deeper and they are joined with the continent. Everybody is joined, it is just a question of going a little deeper. Our roots are entangled with each other, our source of life is the same.

It was a tremendous insight of those days that they decided — particularly, for example, in Tibet: every family had to contribute one child to the monastery, and in the monastery he had to do only zazen. He had no other work to distract him.
But now that possibility does not exist. Hence, I have managed different devices in which you can remain in the world — no need to go to a monastery, because there is nobody to support you. You can be in the world and yet manage an undercurrent of fire that slowly slowly becomes like your breathing. You don’t have to remember it.