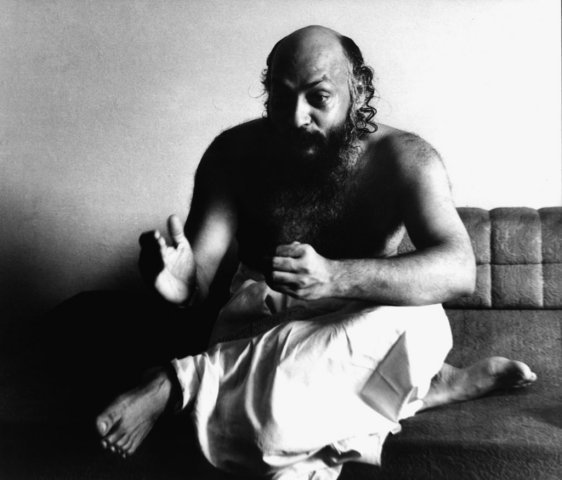 Question – Sometimes when you speak, i get the vision of living a kind of zorba the greek life — eat, drink and be merry — lusty and passionate, and i think this is the way. Other times i feel you are saying that the way is to sit silently, watchful and unmoving, like a monk. So who are we to be — zorbas or monks — and how can a blend of them be possible? I sense that you have managed to integrate the contradictions, but can we be both zorbas, moved by passion and desire, and buddhas, dispassionate, cool and calm?

Osho – THAT IS THE ULTIMATE SYNTHESIS — when Zorba becomes a Buddha. I am trying to create here not Zorba the Greek but Zorba the Buddha. Zorba is beautiful, but something is missing. The earth is his, but the heaven is missing. He is earthly, rooted, like a giant cedar, but he has no wings. He cannot fly into the sky. He has roots but no wings.

Eat, drink and be merry is perfectly good in itself: nothing is wrong in it. But it is not enough. Soon you will get tired of it. One cannot just go on eating, drinking and marrying. Soon the merry-go-round turns into a sorry-go-round — because it is repetitive. Only a very mediocre mind can go on being happy with it. If you have a little intelligence, sooner or later you will find the utter futility of it all. How long can you go on eating, drinking and marrying? Sooner or later the question is bound to arise — what is the point of it all? Why? It is impossible to avoid the question for long. And if you are very intelligent, it IS ALWAYS there, persistently there, hammering on your heart for the answer: Give me the answer! — why?

And one thing to be remembered: it is not that the people who are poor, starving, become frustrated with life — no. They cannot become frustrated. They have not lived yet — how can they be frustrated? They have hopes. A poor man always has hopes. A poor man always desires that something is going to happen, hopes that something is going to happen. If not today then tomorrow, or the day after tomorrow. If not in this life then in the next life.

What do you think? Who are these people who have depicted heaven as a Playboy Club — who are these people? Starved, poor, who have missed their life. They are projecting their desires in heaven. In heaven there are rivers of wine. Who are these people who are imagining rivers of wine? They must have missed here. And there are KALPAVRAKSHAS — wish-fulfilling trees. You sit underneath them, desire, and the moment you desire, immediately it is fulfilled. Not even a single moment passes by between the desire and its fulfillment, no shadow between the desire and the fulfillment. It is immediate, instant!

Buddha himself was a Zorba. He had all the beautiful women available I his country. His father had arranged for all the beautiful girls to be around him. He had the most beautiful palaces — different places for different seasons. He had ALL the luxury that is possible, or that was possible in those days. He lived the life of a Zorba the Greek — hence, when he was only twenty-nine he became utterly frustrated. He was a very intelligent man. If he had been a mediocre man, then he would have lived in it. But soon he saw the point: it is repetitive, it is the same. Every day you eat, every day you make love to a woman… and he had new women every day to make love to. But how long…?! Soon he was fed up. The experience of life is very bitter. It is sweet only in imagination In its reality it is very bitter. He escaped from the palace and the woman and the riches and the luxury and everything….

So, I am not against Zorba the Greek because Zorba the Greek is the very foundation of Zorba the Buddha. Buddha arises out of that experience. So I am all for this world, because I know the other world can only be experienced through this world. So I don’t say escape from it, Prabhu Maya; I will not say to you become a monk. A monk is one who has moved against the Zorba; he is an escapist, a coward; he has done something in a hurry, out of unintelligence. He is not a mature person. A monk is immature, greedy — greedy for the other world, and wants it too early, and the season has not come, and he is not ripe yet. Live in this world because this world gives a ripening, maturity, integrity. The challenges of this world give you a centering, an awareness. And that awareness becomes the ladder. Then you can move from Zorba to Buddha.

When a monk goes away from the world, he goes fighting with it. It is not a relaxed going. His whole being is pulled towards the world. He struggles against it. He becomes divided. Half of his being is for the world and half has become greedy for the other. He is torn apart. A monk is a schizophrenic basically, the split person, divided into the lower and the higher. And the lower goes on pulling him, and the lower becomes more and more attractive the more it is repressed. And because he has not lived the lower, he cannot get into the higher.

You can get into the higher only when you have lived through the lower. You can earn the higher only by going through all the agony and the ecstasy of the lower. Before a lotus becomes a lotus it has to move through the mud — that mud is the world. The monk has escaped from the mud, he will never become a lotus. It is as if a lotus seed is afraid of falling into mud — maybe out of ego that “I am a lotus seed! And I cannot fall into the mud. ” But then it is going to remain a seed; it will never bloom as a lotus. If it wants to bloom like a lotus, it has to fall into the mud, it has to live this contradiction. Without this contradiction of living in the mud there is no going beyond.

You ask me, Maya: SOMETIMES WHEN YOU SPEAK, I GET THE VISION OF LIVING A KIND OF ZORBA THE GREEK LIFE — EAT, DRINK AND BE MERRY — LUSTY AND PASSIONATE, AND I THINK THIS IS THE WAY. OTHER TIMES I FEEL YOU ARE SAYING THAT THE WAY IS TO SIT SILENTLY; WATCHFUL AND UNMOVING LIKE A MONK.

No. I will be the last person to make a monk out of you — otherwise, why are the monks and nuns so much against me? I would like you to become rooted into the earth. I am perfectly in agreement with Friedrich Nietzsche who says: “I beseech you, my brothers, remain faithful to the earth and do not believe in those who speak of other- worldly hopes! ” Learn your first lesson of trust by trusting the earth. It is your home right now!

Don’t hanker for the other world. Live this world, and live it with intensity, with passion. Live it with totality, with your whole being. And out of that whole trust, out of that life of passion, love and joy, you will become able to go beyond. The other world is hidden in this world. The Buddha is asleep in the Zorba. It has to be awakened. And nobody can awaken you except life itself. I am here to help you to be total WHEREVER you are, in whatsoever state you are — live that state totally. It is only living a thing totally that one transcends it.