Osho – one has to disappear into that abysmal depth 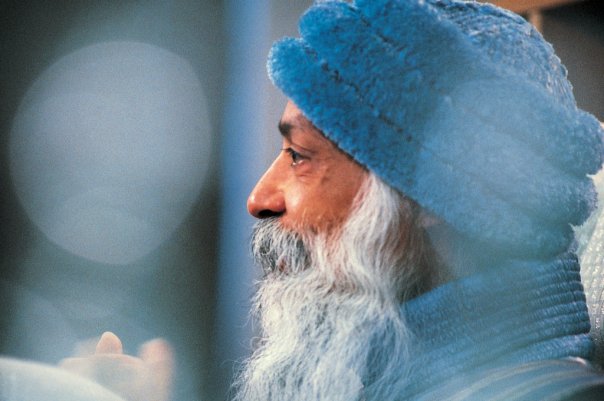 Osho – Ananda means bliss, blissfulness, neelamber means blue sky: blissful blue sky. Blue is the symbol for depth. The sky is not really blue; it looks blue just because of the infinite depth. Neelamber is one of the names of Krishna, because he is as blue as the blue sky.

So the first thing: abysmal depth… and one has to disappear into that abysmal depth. It is not like falling in that depth, because if you are falling then the depth cannot be very much because you are there; you will make it shallow. Going into depth is more like disappearing. It is as when you put a cube of salt into water and you don’t know where it has gone. It has started disappearing, and a moment comes when it is nowhere to be found. But you can taste the water and it will be there.

Buddha was asked, ’Where will you be when you are gone from the body. Because this is your last incarnation in the body; you will not come back again to any womb. Where will you be?’
He says, ’Taste existence and you will find me there. As salt dissolves into water I will dissolve into the cosmos. And if you are capable of tasting it you will taste me.’

The existence is becoming more and more enlightened, because more and more enlightened people are disappearing into it. Man is not falling, man is evolving. Whenever one buddha again disappears into existence it is more salty. Of course existence is vast and big, and a buddha howsoever big is again just a drop, but still that one drop changes the quality of the very existence. You would not have been the same if Jesus had not existed in the world, although it is very difficult scientifically to find out how much he has affected you, how much buddha has affected you, how much lao tzu has affected you. You may not even have heard the names of many buddhas, still they have affected you because they are flowing in your blood. You are breathing them; you cannot remain unaffected by them. The trees have absorbed them and the stars have absorbed them, and wherever you look something of them is present….

So one has to disappear into the depth. When one disappears then only is there depth. If one is, then it is just a pretension of depth; it cannot be real depth. Real depth cannot allow the ego to exist. Ego as such is the superficial. It is just as on the surface of the ocean there are waves, but if you go deep there are no waves. There cannot be any waves because there is no wind. The ego is just on the surface of the mind – those waves and ripples and all that. Once you start entering deeper into your being all that disappears – the mind and the ego and the thoughts. And it is a bottomless abyss: it has no boundary to it. That is the meaning of the sky.

Sky is very symbolic in eastern mysticism… the greatest symbol there is. It means many things. One: it is always present, yet absent. It is present everywhere yet absent. Its very way of presence is being absent. It exists by not being. That’s how god exists. That’s why you cannot show where god is; that’s why you cannot pinpoint him. He is everywhere and nowhere… and that is the quality of the sky too. It is not just an accident that whenever people pray they look at the sky. Unknowingly, they raise their eyes to the sky, because god is like the sky: present and yet utterly absent.

The sky contains all, and nothing contains the sky. God contains all, and nothing contains god. The sky penetrates everything and yet never interferes. It is a miracle! It penetrates without trespassing. It is so non-violent. It accepts all: the sinner and the saint, the good and the bad, the beautiful and the ugly. It makes no distinctions: it has no likes, no dislikes. It has no mind. It is simply open and available to all, whosoever wants to partake of it. It makes no conditions. It is unconditionally everybody’s: man and woman, animals, birds, trees, rocks, stars and sun. It is available to all. It protects but it never patronises. It surrounds you within and without… without ever touching you. And these are the qualities of god.

Black clouds come and go and the sky makes space available for them. White clouds come and go and the sky makes space for them with no distinction; it is choiceless. The acceptance is total; Buddha calls it tathata. The sky exists in a state of tathata, suchness: whatsoever is the case is good. Clouds come and go; the sky remains, it abides. It is eternal, it is timeless. It is always the same. It is the ancientmost and yet as fresh as the dewdrops; it never becomes old. So meditate on the sky, and whenever you have time just lie down on the ground, look at the sky.

Let that be your contemplation. If you want to pray, pray to the sky. If you want to meditate, meditate on the sky… sometimes with open eyes, sometimes with closed eyes, because the sky is within too. As it is big without, within it is the same. We are just standing on the threshold of the inner sky and the outer sky, and they are exactly proportionate. As the outside sky is infinite, so is the inner sky. We are just standing on the threshold. Either way you can be dissolved, and these are the two ways to dissolve.

You asked what prayer and what meditation is. If you dissolve in the outside sky, then it is prayer. If you dissolve into the inside sky, then it is meditation. But finally it comes to the same: you are dissolved. And those two skies are not two; they are two only because you are. You are the dividing line. When you disappear, the dividing line disappears. Then in is out and out is in.

The extrovert prays because he can only relate to the outward. The introvert meditates. The extrovert has to conceive of a god there as ’thou’ so he can have a dialogue. The introvert need not have any god; he can simply close his eyes and start disappearing. The extrovert needs some help – somebody there, objective. Christianity, Hinduism, Islam, Judaism, are all extrovert religions. Jainism, Buddhism, Taoism, are introvert religions; they don’t have anything like prayer. Prayer is just absurd in Buddhism; because it carries the duality it is absurd.

Prayer is more like love: the other is needed. Whether the other is or is not, is not the point, but the prayer becomes possible only through the excuse of the other. If there is no god then god has to be invented, otherwise the extrovert will never be able to reach to the ultimate. Once he reaches he will know, but on the way he needs a support, an objective support, something there he can relate to. Prayer is a dialogue.

The introvert is enough alone. He need not create a god. God may be there; he is not needed. Whenever Buddha is asked, ’What do you say about god?’ he says, ’It is irrelevant.’ That was the attitude of socrates too. He says, ’If gods are there, perfectly good, but they are irrelevant.’ They don’t get in the way of a socrates or a buddha.

Prayer is akin to love and meditation is akin to silence. Prayer is a bridge between the two. Meditation is absolute aloneness – not lonely, not solitary, but alone, in a state of solitude. These are the two ways. Man is standing just in the middle of the two and he is the dividing line, so whether he disappears this way or that, once he disappears the dividing line disappears. Then there is no prayer and no meditation….

Source – Osho Book “Only Losers Can Win in This Game”