Osho – Purity is only when it is simple. Osho on Pope John.Purity and Simplicity 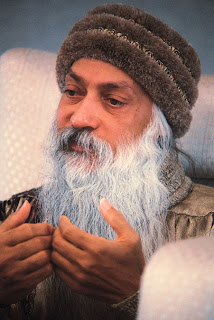 Osho – Deva means divine and punyatam means holy, pure, simple. You have to forget the old name and remember the new. And remember the idea behind it of purity, simplicity. A person can be pure and not simple; then purity is not worth anything. You can force purity on yourself but because you force it, it will not be simple. It will be very complex. It will always carry the repressed as an undercurrent and you will be sitting on a volcano.

So when I say pure and simple, I mean it. Purity is only when it is simple, when it comes spontaneously, when it is not enforced, when you don’t practise it but just allow it to flower. It is
like a child. He is pure, simple, but his simplicity is not that of discipline. Once you try to discipline something, your head becomes powerful, and simplicity is of the heart. The head cannot give you simplicity.

I was just reading this evening about Pope John. He was a simple man, very simple – so simple that many of his colleagues used to think that he was not holy. Because he was so simple they thought he was not great… not a saint at all. Before he became pope, he was a nuncio in Paris. His colleagues were very worried about him because he would mix with ordinary people and would be found in places where he should not be. He would not follow any rules and regulations of his office.

They thought him a little of a nuisance in the high circles… snobs. They used to think that he was a nuisance and not worthy of the post he was holding. He loved gossiping and telling anecdotes and stories – and sometimes rough ones too. In the diplomatic circles he would start saying something and ladies would feel embarrassed. But he was a very simple man, just like a peasant.

Then he became pope. Everybody all over the world was very surprised at how this man could have been elected. They tried to condition him. They taught him how to behave, how to talk, saying, ’You are pope, one of the most important persons in the world, and whatsoever you say means much.’ They taught him the etiquette and formalities. But he would always forget.

The first important person to come to him was Jacqueline Kennedy. They were very worried because Kennedy was the first catholic president of America and America was one of the greatest and most powerful nations, so Pope John had to talk and behave rightly. For seven days they conditioned him, and he would repeat whatsoever they were saying. Then the master of ceremonies was very happy and everything was settled.

Then when Jacqueline Kennedy came, Pope John forgot everything. He opened his arms wide and cried, ’Welcome, Jacky !’ !

This is something very simple, peasant-like, child-like. You cannot manage it. Once you manage it, you destroy it. So what I meant by punyatam is that from this very moment, start thinking in terms of being a child – as if you don’t know the world and don’t know the ways of the world, as if you have no experience… as if you are just a clean slate with nothing written on it. And whatsoever gets written on it, wash it, clean it every day so it remains pure, clean. Remain clean of the past.

Prem means love and dhanya means blessed – blessed by love. Love is the only blessing there is, and those who love are the only ones who are blessed. All others simply live a life of curse. Nobody is cursing them; they themselves are responsible. If one wants to live a life of tremendous bliss and blessing, one should be more loving – not loving to a particular person, just loving.