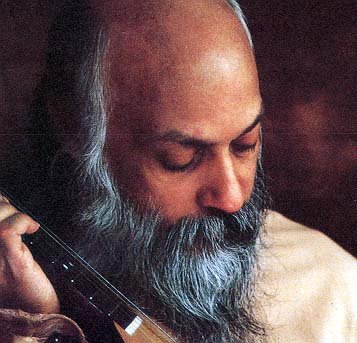 Question – Beloved Osho, What is the difference between music and the gymnastics of music? in the last couple of years my experience has been of frantic non-harmonious music. instead of feeling silent and meditative, i am getting tendonitis in my arms from drumming. Can you comment?

Osho – The difference is simple, just the difference between madness and sanity. Your music is not music; it is simply your madness. But to express it directly you will be in trouble. So to express it through music, the trouble is avoided and you will find fools to say, “What a great musician you are!”

So on both accounts, your madness is released That helps you. And the appreciation of other mad people, gives you an egoistic satisfaction. But the reality is you are deceiving yourself.

You must have a certain talent for music, but it is being used by madness. You can change; it can be used by your meditation. In the East, the music has a totally different quality. It can even cure people from diseases. It can cure even a madman. It is so silent, so subtle, so delicate. In the East, nobody will recognize your jazz and other kinds of music, as music.

A musician works hard, because he has to bring something which is beyond words, but is not beyond music, which cannot be said but it can be played on a sitar. And it is tremendously relaxing, not only for the person who is playing — he completely forgets his ego; only then his music reaches to its ultimate height — but for those who hear it, they also forget their ego. They become simply a listening. There is no listener.

I am reminded of a story that actually happened. In Lucknow, there was a crazy king, Wajid Ali Shah. He was crazy in many ways: the whole day he slept, and the whole night he enjoyed food, dance, music. He was a night man. He had gathered all the greatest musicians into his court, all the great dancers. His court was really rich, but he was always feeling a little sad that one musician who was perhaps the greatest in the country, had not come to his court. Again and again messengers were sent, but the musician said that it would create unnecessary trouble.

Finally, Wajid Ali Shah said, “Whatever trouble it creates, I will take care of it, but you have to come.”
The musician came. He said, “The trouble is the condition I make. When I play on my sitar, nobody in the audience must move his head with my music. That is a great disturbance and I don’t want it. So you will have to promise me that anybody who moves his head and sways with my music, should have his head cut off immediately.”
Wazid Ali Shah was a crazy man. He said, “There is no difficulty.”

In Lucknow it was announced that you have to come knowing perfectly well that the king has accepted this condition. So only those should come who are capable of sitting silently, frozen. If your head is found moving or you sway — Wazid Ali Shah has put one thousand soldiers with naked swords around the audience — immediately your head will be gone.

Thousands of people wanted to come, because the man was so well-known all over the country, and his music was something like a miracle. But only a few came, because the condition was such that even though you were not swaying because of his music, just a fly sitting on your head and you… And that was enough. That Wajid Ali Shah is such an idiot, the head is gone. It is too dangerous.

But still, a few hundred people came. Lucknow was, in those days, a capital of artists, musicians, poets, painters. Even Wajid Ali Shah was surprised. He was thinking that perhaps nobody would turn up. The musician started playing. Everybody was holding himself tight, so that not even accidentally would be allow the head to move. They were sitting like statues. And then a moment came, a few people started swaying.

Wajid Ali Shah was immediately going to order those people’s heads to be cut . The musician said, “Wait, until after the music is finished; but keep note who the people are.”

After the music was finished, Wajid Ali Shah had gathered almost one hundred people. And he asked the musician, “Now, what do you say?”

“Just to sort them out I have made the condition. So now let the others go, and for these hundred people I will play my best. There is still half the night. And there is no condition.”I can feel a kind of at-one-ment with these people. I can feel a certain synchronicity with these people. They know what the heights of music are, where ego disappears, mind stops, there is no thinking.” Music in the East has been used as a meditation. “And these people are capable of reaching to meditation through music.” And he played for them.

In the morning, Wajid Ali could not believe what was happening. It was as if people had completely forgotten who they were — just trees in the wind, swaying, dancing. Their faces had a luminosity. The place was full of a new kind of liveliness that Wajid Ali had never experienced. There was dance, there was joy, and there was something which can only be called spiritual.

You say, “You play drums madly.” That is not music. That is simply throwing up your madness. And of course the world is full of mad people. They will get identified with you; they will enjoy it. Who were the people who were enjoying the Beatles and other music groups that emerged among the younger generation? Who were the people?

The Beatles were mad and their fans — thousands of young people — were mostly hippy. Nobody knew anything about music, but they became great heroes. To become a hero in a mad world, you need to be a great madman.

If you listen to Eastern music, perhaps it will simply go above your head. First, the Eastern musician just prepares for half an hour or more. He is not yet going into depth; he is just preparing his instrument and himself. And you will be tired by that alone. He is just getting ready to take the quantum leap. Infinite patience is needed.

I have heard about Mulla Nasruddin. He went to listen to a great musician, who was just beginning. In the beginning in Indian music, you do aalap. Aalap means he tries to refine all the basic sounds. So he goes on, “Ah-h-h, ah-h-h.” That is, he is refining the sound “ah.” Hence, it is called aalap. He will refine all the sounds; it takes time. And when he is satisfied that now he is ready, then the music begins. But it takes thirty or forty minutes for him.

And as he started his aalap, “Ah-h-h, ah-h-h, ah-h,” Mulla Nasruddin started cryng. Tears were in his eyes.
His friend who had brought him said, “Nasruddin, I never thought that you were such a lover of music. It is just aalap and you are full of tears.”

He said, “You don’t understand. This man is going to die. It is not aalap; this is what happened to my goat! `Ah-h-h, ah-h-h, ah-h-h.’ And she died in the middle of the night! You do something to prevent this man.

“If music brings death, it is better to prevent him. This is not music. I know perfectly well. It has happened in my own house. I have lost one of my best goats.” But when the musician comes and takes the jump into the world of sound and soundlessness… Music consists of both sound and soundlessness; the better the music, the more it will be full of soundlessness; the better the music, the more the sound simply leads you into silence. That is the criterion of authentic music, that it leads you into silence.

Your music… Stop it, and start Dynamic Meditation. That is your music. Why unnecessarily beat the drum? The poor drum has done no harm, no harm to anybody. And do the Dynamic Meditation as madly as you can. In fact, the more madly you do it the better, because you will be throwing out all rubbish and you will come out of it clean, just as if you have come from a shower.

And you feel that now there is nothing to throw out and your Dynamic Meditation has become silent — even if you want, nothing comes out — then take the drum again. That will be an existential experience. Then you can play the drum, and it will not be madness; it will be music.

It is good that you have an interest in music, but first please be sane. And don’t feel guilty that you are not sane. This whole world that we have created is insane, and they all are throwing their insanity in worse ways than you are doing.

You are at least beating the drum, which is dead anyway. They are beating living people. They are raping living women. They are murdering, they are doing all kinds of crimes around the world. And in spite of all the police, all the courts, all the magistrates, all the laws, the crime goes on growing. It has become almost a way of life for millions of people.

So don’t feel bad. In fact, beating a drum is far better than killing a man. But when music can come out of the drum… Just a little preparation is needed. And this is the place of meditation. Meditate a little more, and wait for the right moment when you feel that there is music inside you and you would like to share it with your friends.