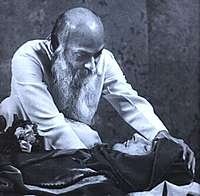 Question : Often you have spoken about your rebellious childhood and how it gave you such freedom, how you insisted on discovering your own individuality. How did you know the need to rebel at this early age? What about those people who didn’t have the courage to rebel and who had a hampered childhood? Is a rebellious childhood necessary for enlightenment?

At the age of twenty-nine, he had to rebel. He could see that these twenty-nine years had gone just without any meaning. The astrologers had said to his father that he should not be allowed to see a dead body, a sick man, an old man, a sannyasin. He was the only son of his father, born in his very old age, so the whole kingdom belonged to Gautam Buddha. And the father was very much afraid because the astrologers had said, “If you don’t manage rightly there is every possibility that he may renounce the world and become a seeker of truth. If he remains in the world and becomes the king, then there is a possibility that he may even become the king of the whole world, he has such great potential. Either he will become the great conqueror of the world — in Sanskrit it is called chakravartin — or he will become an enlightened one. It is between these two.

“And we cannot say right now what will happen, but if you can manage to keep these few things from his knowledge, he will never renounce the world. Bring the most beautiful girls of the kingdom. Keep him surrounded with the girls, with music, with dance, with wine, with good food. Make beautiful palaces for him for different seasons in different locations. In summer he should be in a cold region, in winter he should be in a warmer place. So make three palaces.”

India has three very clear — cut seasons: summer, winter, rains. And the father was so rich he managed three beautiful palaces. The gardeners were told that he should not see even a pale leaf or a dead leaf No idea should get into his mind that things get old or things die. For twenty-nine years he lived almost a prisoner in utter luxury.

The rebellion came because he was going to open the annual ceremony of the entire kingdom, some kind of Olympic games for youth. On the way in his golden chariot, he saw an old man for the first time in his life. He asked the charioteer, “What has happened to this man?” The charioteer said, “I cannot tell you a lie. What has happened to this man happens to everybody; he has become old.” Immediately Gautam Buddha asked, “That means it is going to happen to me also?” He was at his prime of youth, a beautiful young man.

The charioteer said, “I would like that it should not happen to you, but nature cannot be changed. It is just the law of nature. One who is born will become old, it cannot be prevented.”

And then came a dead man’s body being carried to the crematorium. And Buddha said, “What is happening?” The charioteer said, “This happens after old age. This is the last stage. After this nothing happens. This man is dead.” Buddha had not even heard the word death.

And then he saw a sannyasin who was just following the dead man’s body. And he said, “This man looks strange. Shaven head, orange clothes, with a begging bowl in his hand. I have never seen such a type. What is his profession?” The charioteer said, “He has renounced all professions. He is a sannyasin. He is a seeker of truth. Realizing that life one day becomes death, he wants to know, ‘Is there something within us which does not die? Or does everything die?’ He is on a immense journey, a search for himself, his eternity.”

Buddha said to him, “Return the chariot back to my palace. I am not going to open, inaugurate the function, because I have already become old. I am already feeling as if I am dying and suffocating. You just take me back home. I have been deceived.” And this was the first time a great rebellion was born in his mind. That very night he escaped from the palace. But twenty-nine years were lost. He could have become enlightened long before.

Rebellion is certainly a necessary part. It cuts you from the ordinary social world and makes you an individual. Rebellion is the fire, passing through which one gains freedom, individuality, integrity. And only after that can one relax and be oneself, be simple, be innocent. It is a new birth. And then enlightenment is not far away. Hindrances removed, enlightenment is always there. It is your birthright.