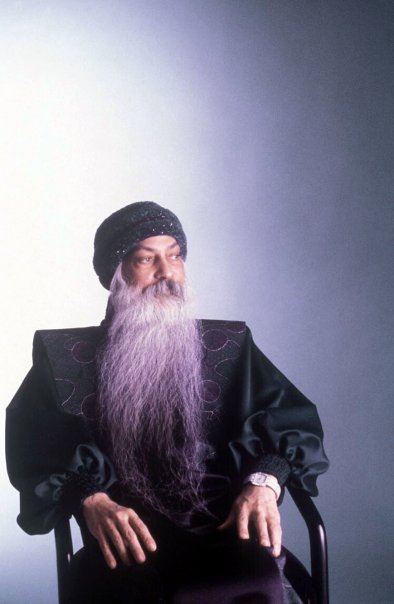 The first kind of consciousness, waking, creates its own culture, its own civilization; the West represents it. The second kind of culture is created by the second kind of consciousness, dreaming; the East represents it. That’s why you find it very difficult to communicate; the Western mind finds it almost impossible to communicate with the Eastern mind. It is not only a question of language – language you may understand – the question is of the orientation.

The Western emphasis is on the objective, the public: when you are wakeful, whatsoever you see others can also see. You are seeing me here, everybody can see me – one who has eyes can see – there is no need for any proof. The sun rises, and you know: the proof exists in the very experience. And everybody is experiencing it – there can be a collective consensus about it. But when I say I have seen the sun rise in the evening it is no more a collective experience; it is no more objective, it becomes subjective.

In the East you will find people who have experienced kundalini rising in them, great light exploding as if thousands and thousands of suns have suddenly risen on the horizon; you will find people who have seen lotuses blooming inside – and to the Western mind it looks all nonsense. The Western mind has developed technology, science – objectivity. It lives in the first, the waking, state; the visionary is rejected. In the West the visionary is a marginal phenomenon, he exists on the outskirts of civilization. He is at most tolerated; he is harmless, he can be tolerated. But he has no roots in the culture at large, he is not the main current. In the East the scientist lives in the same way – on the margin; he is not the main current. He can be tolerated, he can be used, but the respect goes to the visionary, to the dreamer, to the poet who dreams great dreams.

These are the two ordinary states; the third state happens to both, but you cannot catch hold of it, the mind dissolves. In SUSHUPTI, in dreamless sleep, you disappear as an ego, and you disappear so utterly that you cannot even remember in the morning what happened. You can remember your dreams, you cannot remember your dreamless sleep, at most it can be remembered as gaps. You can say ’I slept so deeply that there were not even dreams.’ But that is guess-work; there is no direct experience of SUSHUPTI.

No culture has evolved out of SUSHUPTI because there is no possibility to catch hold of it directly. But that is the deepest ordinary state of mind. It is out of SUSHUPTI, dreamless sleep, that you get rejuvenated every day. You go to the source, you move to the source, you are again in contact with the primal consciousness, you are again in contact with your ground. You are no more human, you are no more Hindu, no more Christian, you are no more a man or a woman, black or white, you are no more Eastern, Western; all disappears – all distinctions. You are, but there is no identity, that’s why out of dreamless sleep great peace is felt.

If you move into deeper meditation, you will come to the third state where one can become aware of dreamless sleep too. And many have stopped there; because it is so blissful, many religions have stopped there, they don’t go beyond it.

There is a fourth state also, and unless you reach to the fourth, go on remembering that the third is very alluring, the third is very beautiful, very blissful, but still you have not arrived home. The fourth is the home; the Eastern mystics have called it TURIYA, turiya means the fourth.

Waking is objective, outer; it is a kind of concentration. Dreaming is between the outer and the inner, a link between waking and deep sleep, and deep sleep is the inner. Then what is the fourth, the turiya? It is both and neither. It is both inner and outer, and because it is both, that’s why it is neither.

It transcends both, it is non-dual, it is total. Now nothing is outer, nothing is inner. Objects disappear and, simultaneously, the subject tOo; there is no experience and no experiencer. This fourth state is called SAMADHI, SATORI. And the beauty of the fourth is that you can live in the world and yet be not of it.

Zen believes in the fourth. Those who believe in the third have to leave the world, they have to go to the Himalayan caves. Only there is it possible that they can fall into continuous deep dreamless sleep. It is falling into a beautiful coma. Its spiritual worth is nothing, although there is no misery, no anxiety, because the mind is put aside. But it is a state of coma, it is escapist. And the man has not known yet what the truth is. He has chosen one thing: escaping. The Western mind moves deeper and deeper into the world, into activity, and the Eastern mind moves out of activity, more and more out of the world.

Now, here both kinds of people have gathered. When the Western mind comes to me he always asks how to relate with people – that is his basic question – how to be more loving, caring, how to grow deeper into relationship. No Indian, no Easterner, ever asks this – that is not his question at all, his question is how to get out of relationship, how to forget all this misery – birth and death, and reincarnation, and the whole wheel – how to stop it, how to jump out of it. You can watch it, it is very apparent. The Western mind is clear-cut, logical, rational, mathematical, alert. The Eastern mind is dreaming and, according to Western standards, lousy, sloppy, messy, because in a dream you cannot be very clearcut, otherwise the dream will disappear. To the Eastern mind the Western mind is worldly, calculating, cunning, clever.

The third kind has happened both in the East and the West very rarely. In the West monasteries have existed, and people have renounced the world and moved – in the East too. One who becomes interested in dreamless sleep… And it is greatly satisfying – no doubt about it, there is great pleasure in it, it is very tranquil, undisturbed, but it is a kind of death, not life. And there is fear that it can be disturbed – any small thing can disturb it – a small thought can move, and all is lost. A small dream is enough to destroy it.

Zen people have worked for the fourth. The fourth means: live in the world like a lotus leaf in water, be awake and yet remain centred. So all that is needed to be done, be in the cyclone and yet remain in the centre of it, unaffected by it. Naturally, the Zen man creates the most alive, living, streaming, pulsating life. The Zen man creates action in inaction, or inaction through action. Polarities meet and merge, and wherever polarities meet and merge there is God.

The fourth is the primal state, the very basic and fundamental state out of which these three have arisen. These three are branches, the fourth is the root. The sutras of today you will be able to understand only if you understand this approach, the approach through the fourth, through totality. One has not to escape, one has to go into the deepest world but is not to be lost there. One has to remain conscious, one has to remain alert, and one has to go deep into the world. The meeting of the extremes will bring you the richest crop of life.

It happened… Vivekananda once told his Master, Ramakrishna, that his highest spiritual aspiration was to remain immersed for days on end in NIRVIKALPA SAMADHI, the disappearance of all forms into absolute Godhead. He sincerely longed for what he then considered to be the ultimate spiritual experience.

But Ramakrishna, who had once spent six months in unbroken NIRVIKALPA, his body kept alive only by force feeding, relied ’You are a fool. There is a realization higher than NIRVIKALPA SAMADHI.’ Vivekananda was at that time dedicated to the third dimension of contemplation, and Ramakrishna was attempting to turn him toward the fourth dimension, or TURIYA.

NIRVIKALPA SAMADHI IS a state of deep sleep. All has disappeared; it is absent, it is negative. The cup is empty, utterly empty; ready to be filled, but not yet filled. The empty cup is not the goal – cannot be the goal; emptying is only the method so that one day the cup can be filled with the presence of God. But God exists as the world – there is no other God. God has appeared as the world; God is not somewhere else. The world is God manifest. One has to empty oneself to prepare, but one has to remain in close contact with the world otherwise one becomes disconnected.

So don’t get too much into the objects – don’t become a Westerner, and don’t get too much into the dreams – don’t become an Easterner. Don’t get too obsessed with kundalini and experiences like that because those are all mind things. Remain alert while moving with people, while moving in the world, remain alert while moving in dreams. And there are beautiful dreams too, spiritual dreams too – remain alert, don’t get distracted by them. And when you are able to be alert in the objective world and then alert in the dreaming world, slowly slowly you will become alert in the dreamless deep sleep too. And then you are at the gate of the fourth. And when you enter the fourth, you are back into the world; the circle is complete. But now you are the centre of the cyclone.

Source – Osho Book “The Sun Rises in the Evening”