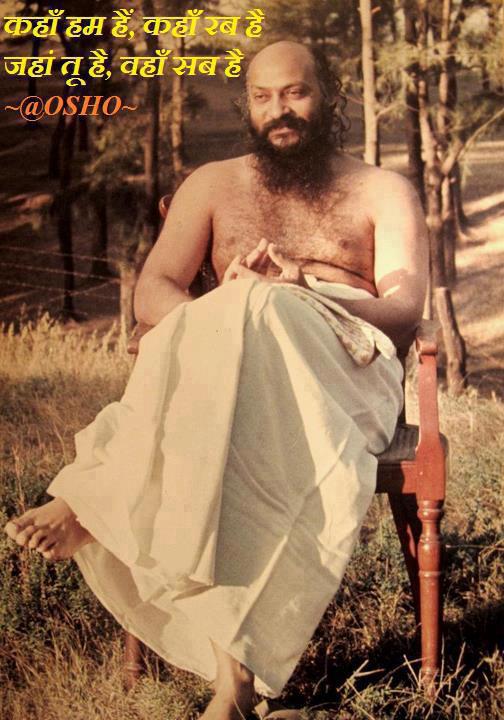 Question : I kept wondering what you meant about our having to go astray — wondering what i would have to do, and then suddenly realised, we are astray.’

Remember, this is the first realisation,’I am astray,’ which will make you come back to the path. The moment Adam realised,’I have committed the sin,’ he was returning back home. The moment you realise that whatsoever you are and wherever you are you are wrong…. It is very difficult to realise it because the mind tries to protect, to rationalise. The mind belongs to the world. It goes on protecting you — not exactly you but your ‘astrayness’. You will have to drop all protections, all rationalisations. Once you understand that you are astray, you suddenly realise that you have nothing to save in this world — the wealth, the power, the prestige, nothing is of worth. It is all rubbish. And you are losing something tremendously valuable for rubbish; you are selling yourself and purchasing toys; you are destroying the possibility of creating a soul for nothing.

What are you doing? You are not trying to realise yourself, you are trying to compete with others. Nobody is trying to be oneself, everybody is trying to defeat the other. The whole world lives like a competitive madhouse: somebody purchases a car, now you have to purchase a car, and a bigger one. You may not need it but now your ego is hurt. Somebody makes a big house, now you have to make one, and a bigger one. This is how life goes on being wasted. Why should you be worried what others are doing? That is their thing to do; if they feel good, let them do it. You should look at your own need.

But there are two types of people ordinarily: one who is competing with others and another type who goes on condemning others that they are doing wrong. Both are wrong. Who are you to decide? If somebody is making a big house, who are you to decide if he is doing right or wrong? It is none of your concern. It is for him to think about. You should only think about whether what you are doing is for you to do.

People go to absurd lengths in competition, and people go on dying every day. One day death possesses you, then you remember that your whole life was wasted with fighting others. And it was pointless. You should have put your whole energy into realising yourself.

I have heard a very beautiful anecdote. A Catholic church and a synagogue happened to be on opposite sides of the same street. And a rivalry sprang up between the parish priest and the rabbi. When the church was repainted, the synagogue had to be stuccoed. When the priest organised a parish procession of one thousand witnesses through the town, the rabbi organised a procession of two thousand of the faithful.

The priest bought a new car, so the rabbi bought a bigger one. Then the priest had a solemn ceremony outside his church of blessing his new car and the rabbi came out with a large pair of pliers, went up to his car and cut three inches off the exhaust pipe.

Circumcision! People go on to absurd lengths. One has to defeat the other anyhow. One has to take over the other. Remember, this foolishness is very ingrained in humanity, and unless you drop this foolishness you will not be able to know yourself, you will not be able to come back home. You will go on moving more and more further away, becoming more and more astray. And one day suddenly you will realise that the whole edifice has collapsed. It was foundationless, you were making a house of cards. A small breeze came and everything disappeared. Or, you were trying to sail in a paper boat.

Man as he is, is simply living in a dream — the dream of the ego, ambition, power, prestige. The religious man is one who has come to understand that all this is going astray.

One day it happened that I was at Mulla Nasruddin’s house. Mulla Nasruddin’s teenager son had dented a fender of the family car.
‘What did your father say when you told him?’ I asked him.
‘Should I leave out the cuss words?’ he said.
‘Yes, of course.’
‘In that case,’ said the boy,’he did not say a word.’

One day when you look back on your life you will not see a single act that was intelligent — all were stupidities, foolishnesses. You will feel simply ashamed. The sooner you realise it, the better.

This is what SANNYAS is all about: a recognition that the way you have lived up to now was absurd; a gesture that you would like to discontinue with your past. By changing the name and by changing the dress nothing is changed, it is a simple gesture that now you feel ashamed with the old identity. It was so foolish that it is better to forget all about it. A new nucleus, a new name, so you can start afresh.

And it is easier to drop the past than to renovate it. It is easier to be completely cut off from the past rather than to modify it. You can paint a foolish thing, you can modify it, but you cannot make it wise — it will remain foolish. It is better to drop it.

So if this recognition has come to you that we are astray, feel blessed, and don’t forget it. Remember it continuously. Unless you have come back to the path, go on remembering it. Just recognising it once won’t do, you will have to live it, remember it for a long time continuously, again and again, so the hammering continues — whatsoever you have done in the past, it is finished.

At least if you remember that it was all wrong… and I say ALL wrong. Don’t try to decide that a few things were good. I insist: either ALL things are wrong or ALL things are right. There is no other way. It is not possible that a foolish man can do a few things that are right. And the vice versa is also not possible that a wise man can do a few things that are wrong. A wise man does ALL right and a fool goes on doing ALL wrong. But the fool would like to choose at least a few things right, the fool would say,’Yes, I have done many things wrong, but not all.’ Then those things that he saves and says were right will become the centre for his ego again. So be totally frustrated with your past.

Fritz Perls used to say that all therapy is nothing but skillful frustration. The great therapist is one who goes on frustrating you skillfully — that’s what I am doing here. I have to show you that whatsoever you have been doing was wrong, because only that understanding can save you. Once you recognise that the whole past was wrong, you simply drop it, you don’t bother to choose. There is nothing to choose. It all came out of your unawareness and it was all wrong. Your hatred was wrong, your love also; your anger was wrong, your compassion also. If you seek deep down you will always find wrong reasons for your compassion and wrong reasons for your love. A foolish man is foolish and whatsoever he does is foolish.

So it will have to be remembered continuously, it should become a constant remembrance — what Buddha used to call mindfulness. One should remain mindful so it is not repeated again. Because only mindfulness will protect and you will not be able to repeat your past again — otherwise the mind tends to repeat it.