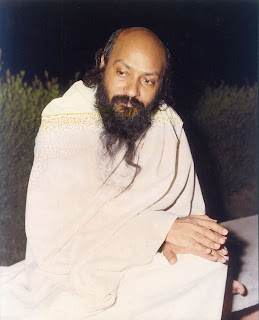 [A sannyasin, returning to the west, says she fears that the anger which was provoked in the primal group here will surface again with her family particularly her mother – or in self-destructive ways. Osho checks her energy.]

Osho – Mm mm – it is there and very much. You have just touched the tip of it, mm ? The whole iceberg is there and you are very much afraid of it. The fear is not allowing you to express it; the fear is sitting on top of it. And fear is bad – anger is good. If one has to choose between fear and anger, then anger has to be chosen, because anger is hot energy, anger is life energy; fear is death, fear helps you to shrink.

Anger is in the service of life, anger has some survival value, great value. So start choosing anger instead of fear…. But this is how it happens in the childhood: parents force fear to repress anger. They create much fear in the child – that the child will be punished, that the mother will die, the mother will leave the child, or something wrong will happen if the child does not listen to the mother or to the father – so rather than being angry, the child becomes afraid.

One, if it is possible back home that you can go running, that will help tremendously. If it is possible, start running – there is nothing better than running – a three, four mile run. By and by, slowly increase it to three, four miles, but really go into it like a meditation. Go alone early in the morning, then you will be more free with the elements – the air, the sun, the atmosphere, the trees, the birds. Don’t be competitive in running. If you run with somebody, our minds are so poisoned by competition, that naturally you start competing.

If you run with somebody, you want to defeat them – unconsciously, you want to come first. The poison has gone very deep, and when running becomes competitive it is no more meditation; it is a sport, not a meditation. So running has to be noncompetitive – one thing …. The second thing: running has to be without any self-criticism – that you should improve it, that you should run more, that you can do better. That is nonsense! You are not competing with anybody, you are simply enjoying the thrill of it. So do it with no self-criticism – just for fun!

If we can do at least one thing in every day for one hour without any judgement, that is meditation. Just out of fun! And we have been so badly conditioned against fun; everything has to be turned into a utility. People will ask ’Why are you running? You are not fat, so why? You are not interested in reducing your weight, so why? You are not going to compete, then why?’

We have been trained to be always seeking some utility, and all that is beautiful happens only when we are not utilitarians – when we are doing something just for the very joy of it, the sheer joy. And running goes very deep. That is why I am suggesting it. There is fear; below the fear there is anger and below the anger, there is love, and below all these things something has to be found, so start working below all these layers.

Running is one of the deepest layers of humanity because man has been a runner for millennia. Just for a few hundred years man has stopped running. He was a hunter – running was one of the basic things to know. Still in southern africa, hunters exist; there are tribes which are just hunting tribes.

So the deepest layer in humanity is that of hunting. Our brain cells have an in-built capacity to run. Swimming is not so deep – it is a learned thing – but this running is really deep. So sometimes it happens that a runner can achieve more meditative energy than a meditator! In meditation the possibility is ten percent, in running the possibility is eighty percent.

In a better world, running will become one of the most important meditations, because when you are running fast, breathing deeply, by and by, after the first mile you don’t have any separation between you and the body. That division of mind and body disappears, you become psychosomatic: you are one, one unity.

After the first mile when you are running and the breathing has taken hold of you and is really going deep – it has to go deep, exhaling, inhaling, both are the deepest possible – your whole blood is being purified, the air is passing through you – the sun rays are passing through, you are again part of nature, you are again an animal, not a civilised human being – which is a dead thing …. When you are an animal again, suddenly worries disappear. A person cannot run and worry together – that has not been possible. Many people have tried….

I, myself, was running fifteen miles a day for almost ten years. After the first mile you are turned on. No LSD can do that! You are simply no more part of humanity; you are part of the universe. And it is such a certain thing that after two, three months, you can depend on it; every day it will happen! It is just a question of three months.

Once the running reaches to your deepest core and your hunter which is there – you still carry it in the neurons of the brain; it just has to be tapped again, made alive, invoked – becomes alive again, once it is invoked, it will give you tremendous joy. And with that joy, fear will disappear; with that joy, anger will disappear and love will start flowing. One thing – if it is possible; this is the best meditation that I can prescribe for you.