Osho – She was my first enlightened sannyasin 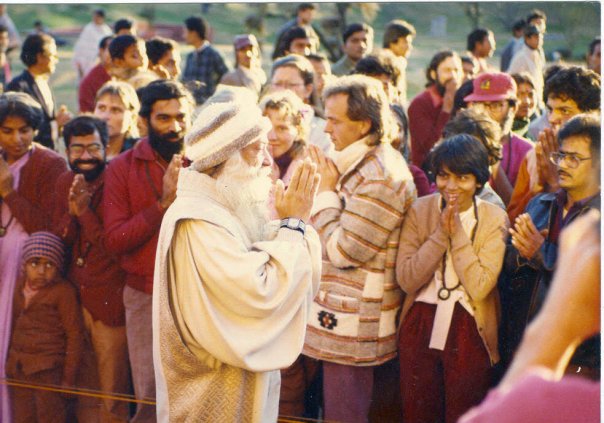 Osho – The first thing I did after my enlightenment, at the age of twenty-one, was to rush to the village where my grandmother was, my father’s village. She never left that place where her husband had been burned. That very place became her home. She forgot all the luxuries that she had been accustomed to. She forgot all the gardens, the fields, and the lake that she had possessed. She simply never went back, even to settle things.

She said, “What is the point? All is settled. My husband is dead, and the child I love is not there; all is settled.”

Immediately after my enlightenment I rushed to the village to meet two people… first Magga Baba, the man I was talking about before. You will certainly wonder why. Because I wanted somebody to say to me, “You are enlightened”… I knew it, but I wanted to hear it from the outside too. Magga Baba was the only man I could ask at that time. I had heard that he had recently returned to the village.

I rushed to him. The village was two miles from the station. You cannot believe how I rushed to see him. I reached the neem tree….

The word neem cannot be translated because I don’t think anything like the neem tree exists in the West at all. The neem tree is something strange: if you taste the leaves they are very bitter. You cannot believe that poison could taste more poisonous. In fact it is just the opposite, it is not poisonous. If you eat a few leaves from the neem tree every day… which is a difficult thing. I have done it for years; fifty leaves in the morning and fifty again in the evening. Now, to eat fifty leaves of the neem tree really needs someone who is determined to kill himself!

It is so bitter, but it purifies the blood and keeps you absolutely free from any infection, even in India, which is a miracle! Even the wind passing through the leaves of a neem tree is thought to be purer than any other. People plant neem trees around their houses just to keep the air pure and unpolluted. It is a scientifically proven fact that the neem tree keeps away all kinds of infection by creating a wall of protection.

I rushed to the neem tree where Magga Baba sat, and the moment he saw me do you know what he did? I could not believe it myself  —  he touched my feet and wept. I felt very embarrassed because a crowd had gathered and they all thought Magga Baba had now really gone mad. Up till then he had been a little mad but now he was totally gone, gone forever…gate, gate  —  gone, and gone forever. But Magga Baba laughed, and for the first time before the people he said to me, “My boy, you have done it! But I knew that one day you would do it.”

I touched his feet. For the first time he tried to prevent me from doing it, saying, “No, no, don’t touch my feet any more.”

But I still touched them, even though he insisted. I didn’t care and said, “Shut up! You look after your business and let me do mine. If I am enlightened as you say, please don’t prevent an enlightened man from touching your feet.”

He started laughing again and said, “You rascal! You are enlightened, but still a rascal.”

I then rushed to my home  —  that is, my Nani’s home, not my father’s  —  because she was the woman I wanted to tell what had happened. But strange are the ways of existence: she was standing at the door, looking at me, a little amazed. She said, “What has happened to you? You are no longer the same.” She was not enlightened, but intelligent enough to see the difference in me.

I said, “Yes, I am no longer the same, and I have come to share the experience that has happened to me.”

She said, “Please, as far as I am concerned, always remain my Raja, my little child.”

So I didn’t say anything to her. One day passed, then in the middle of the night she woke me up. With tears in her eyes she said, “Forgive me. You are no longer the same. You may pretend but I can see through your pretense. There is no need to pretend. You can tell me what has happened to you. The child I used to know is dead, but someone far better and luminous has taken his place. I cannot call you my own any more, but that does not matter. Now you will be able to be called by millions as theirs, and everybody will be able to feel you as his or hers. I withdraw my claim, but also teach me the way.”

This is the first time I have told anybody; my Nani was my first disciple. I taught her the way. My way is simple: to be silent, to experience in one’s self that which is always the observer, and never the observed; to know the knower, and forget the known.

My way is simple, as simple as Lao Tzu’s, Chuang Tzu’s, Krishna’s, Christ’s, Moses’, Zarathustra’s… because only the names differ, the way is the same. Only pilgrims are different; the pilgrimage is the same. And the truth, the process, is very simple.

I was fortunate to have had my own grandmother as my first disciple, because I have never found anybody else to be so simple. I have found many very simple people, very close to her simplicity, but the profoundness of her simplicity was such that nobody has ever been able to transcend it, not even my father. He was simple, utterly simple, and very profound, but not in comparison to her. I am sorry to say, he was far away, and my mother is very very far away; she is not even close to my father’s simplicity.

You will be surprised to know  —  and I am declaring it for the first time  —  my Nani was not only my first disciple, she was my first enlightened disciple too, and she became enlightened long before I started initiating people into sannyas. She was never a sannyasin.

She died in 1970, the year when I started initiating people into sannyas. She was on her deathbed when she heard about my movement. Although I did not hear it myself, one of my brothers reported to me that these were her last words…. “It was as if she were talking to you,” my brother told me. “She said, `Raja, now you have started a movement of sannyas, but it is too late. I cannot be your sannyasin because by the time you reach here I will not be in this body, but let it be reported to you that I wanted to be your sannyasin.'”

When I reached home I could not believe my eyes: she was eighty years of age and yet looked so young. She had died twelve hours before, but still there was no sign of deterioration. I said to her, “Nani, I have come. I know you will not be able to answer me this time. I’m just telling you so that you can hear. There is no need to answer.”

Suddenly, almost a miracle! Not only was I present, but my father too, and the whole family, were there. In fact the whole neighborhood had gathered. They all saw one thing: a tear rolled down from her left eye  —  after twelve hours!

Doctors  —  please note it, Devaraj  —  had declared her dead. Now, dead men don’t weep; even real men rarely do, what to say about dead men? But there was a tear rolling from her eye. I took it as an answer, and what more could be expected? I gave fire to her funeral, as was her wish. I did not do that even to my father’s body.

In India it is almost an absolute law that the eldest son should begin the fire for his father’s funeral pyre. I did not do it. As far as my father’s body was concerned, I did not even go to his funeral. The last funeral I attended was my Nani’s.

That day I told my father, “Listen, Dadda, I will not be able to come to your funeral.”

He said, “What nonsense are you saying? I am still alive.”

I said, “I know you are still alive, but for how long? Just the other day Nani was alive; tomorrow you may not be. I don’t want to take any chances. I want to say right now that I have decided I will not attend any other funeral after my Nani’s, so please forgive me, I will not be coming to your funeral. Of course you will not be there so I am asking your forgiveness today.”

He understood and was a little shocked of course, but he said, “Okay, if this is your decision, but who then is going to give fire at my funeral?”

This is a very significant question in India. In that context it would normally be the eldest son. I said to him, “You already know I am a hobo. I don’t possess anything.”

Magga Baba, although utterly poor, had two possessions: his blanket and his magga  —  the cup. I don’t have any possessions, although I live like a king. But I don’t possess anything. Nothing is mine. If one day someone comes and says to me, “Leave this place at once,” I will leave immediately. I will not even have to pack anything. Nothing is mine. That’s how one day I left Bombay. Nobody could believe that I would leave so easily without looking back, even once.

I could not go to my father’s funeral, but I had asked his permission beforehand, a long time before, at my Nani’s funeral. My Nani was not a sannyasin, but she was a sannyasin in other ways, in every other way except that I had not given her a name. She died in orange. Although I had not asked her to wear orange, but on the day she became enlightened she stopped wearing her white dress.

In India a widow has to wear white. And why only a widow?  —  so that she does not look beautiful, a natural logic. And she has to shave her head! Look… what to call these bastards! Just to make a woman ugly they cut off her hair and don’t allow her to use any other color than white. They take all the colorfulness from her life. She cannot attend any celebration, not even the marriage of her own son or daughter! Celebration as such is prohibited for her. The day my Nani became enlightened, I remember  —  I have noted it down, it will be somewhere  —  it was the sixteenth of January, 1967.

One thought on “Osho – She was my first enlightened sannyasin”