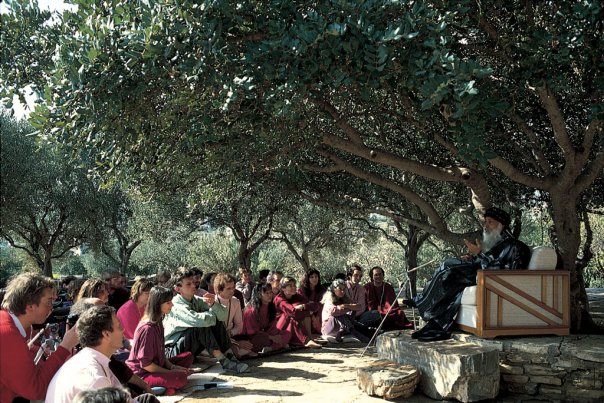 Question – Beloved Master, J. Krishnamurti does not want an organization — still his secretary, Raj Gopal, betrayed him and took possession of his finances and his archives. You approve of institutions and at times permit organization where necessary. In spite of due care, a similar situation to Krishnamurti’s with Raj Gopal has happened with you and Sheela.Does this mean that in the very nature of human beings such a situation cannot be avoided? Please explain.

Osho – A similar situation has not happened. Sheela has done much good, ninety-nine percent good. The whole credit of keeping all the commune together, of creating houses for five thousand people with all the modern facilities, with central airconditioning — I don’t think any city is totally air-conditioned as you are — of giving you the best food possible…. She has done immense good to you, and you should be grateful for it. The credit goes to her. Only one percent she missed, and that seems to be natural to human nature, particularly for people like Sheela.

Sheela had no spiritual aspirations. Seeing that she has no potential, at least in this life…. And this was my impression on the very first day she entered my room in 1970 — that she was utterly materialistic, but very practical, very pragmatic, strong-willed, could be used in the beginning days of the commune… because the people who are spiritually-oriented are stargazers.

I am reminded of an astrologer in Greece who was the best astrologer, and he used to go out of Athens in the night to watch the stars. One night he fell into a well because he was looking at the stars, so he could not see the well. Hearing the sound, a woman who lived nearby threw a rope and somehow managed to pull him out.

The astrologer was very grateful, and he said, “You have done so much for me — you have saved my life. Perhaps you don’t know that I am the greatest astrologer in the whole country, and perhaps in the whole world. Kings come to see me, and they have to wait because my appointments are already fixed for weeks ahead. My fee is very high, but I will see you and predict your future without any fee. Tomorrow you can come, and I will cancel the appointment: tomorrow one of the kings is coming to see me, but you are more valuable to me.”

Sheela was not a stargazer. The reason I had appointed her my secretary was basically this: she was not interested in meditation, she was interested in making roads, houses — which meditators would need. And she did her job well. Just one percent she took advantage of the opportunity, because I was not available to you.

Five thousand people she could manipulate in my name, by saying, “This is what our Beloved Master wants.” Now I have come to know things from sannyasins that I had no knowledge of. But each thing that she wanted, she said was wanted in my name. For example, if you were told to make a ditch for electric wires, you made it. You have nothing to do with the crime, although the ditch was made to bug the houses. But how can you know the difference, if you are not an electrician or an electronics engineer — that the wires are not for electricity but for bugging? You saw the wires, you have made the ditch; still you are innocent.

Only the group of twenty people who have fled with her knew perfectly well what was happening. They had made the whole system of bugging. This is just the fear of any person who becomes ambitious for power. He is always afraid.

Out of fear she drove away all the people who could have been rebellious, who could have doubted — because they have lived with me longer than Sheela, they knew my ideology. They could not believe that I was creating a religion, that she was the high priestess of the religion. She threw them out, harassed them in such a way that they had to leave.

Only the group of twenty people that she had chosen — they were all new, they had not known me before. They were not aware of my ideology, my approach, my respect for everybody. They were simply gullible. And because Sheela made them heads of corporations, naturally they were happy. They were not expecting — new people getting all the power…. And she made them commit crimes — all of them. This is a simple strategy. If all those people have committed crimes, then nobody is going to open his mouth, because he will be caught too.

She tried to kill three of the people who were intimate to me, for the simple reason that she was afraid these three people had the opportunity to approach me without her permission: my physician, my dentist, and my caretaker. They were living with me in the same house, but they were not aware of anything until she started poisoning them.

First, my caretaker was poisoned in Sheela’s room, with a cup of tea. But nobody ordinarily comes immediately to the conclusion that you are poisoned. She felt sick, the doctors examined her, but there was nothing, no disease. They said, “Simply rest will do.”

Then my physician was poisoned with a cup of coffee in the same place — in Sheela’s room. Because he is a physician, and of great talent — has the highest degrees from England, was the youngest member ever of the Royal Society of Physicians. Such young people are never accepted by the Royal Society, but his genius is there — he immediately suspected there was poison, but there was no way to detect it.

He said that there are poisons which cannot be detected through blood, or through any other way. He even named one poison that is undetectable. And when Sheela left, in her room we found all this literature on poisons, how to murder people. And in the literature on poisons, the same poison that my physician was suspicious of is underlined. That is the only poison which is underlined, and it says it is undetectable.

When I heard that these things were happening I started to speak. Sheela was insistent, “Your health is good, it has improved; you have recovered. If you start speaking again, it may be affected.”

I said, “What am I going to do with the health?” If my people are being poisoned — for whom I am living, to whom my health is dedicated, to whom my whole life is dedicated….

And the day I started speaking, everybody was excited, ecstatic — because they were thinking I was not going to speak for the rest of my whole life — except Sheela. She was sad, and her gang, because now it was clear that sooner or later I would find out things from people. Now I can see why she was asking me again and again, “Will you ever change me as a secretary?”

I said, “Why do you ask me that question? I have told you I am not going to change you.” But she went on asking the same question dozens of times. It was enough indication to me that she was doing something which made her suspicious that, if I found out, I was going to change her. And she did not even come to say goodbye to me. She simply escaped like a criminal, a thief, with all those twenty people.

Just one woman amongst twenty, Ava, proved to be really a courageous woman. From Seattle she turned back. She told them that she could not remain her whole life with this burden and guilt, she was going to the commune. And she is giving her testimony today. She knows all the crimes, because she was part of the gang.

Now the whole burden goes on Sheela. And if the FBI does not take any action when they have an eyewitness, that means they are protecting the criminals. Then I will have to take other measures. Certainly, I cannot be violent with them — but they have committed crimes that they can be imprisoned for by the Swiss police, who will be cleaner than the American police. Sheela has committed bigamy, and her Swiss husband, Dipo, has also committed bigamy. His American wife is here.

The whole world, its intelligentsia, and the whole world media is with you. And if America wants to fall in the eyes of all the intelligent people of the world, then it is up to them. But we will give them a real fight, one they have not seen in the three hundred years of their history. It is not going to be easy.

But this is a totally different confrontation. We are nonpolitical people. And I am advising my people to undo everything that Sheela has done politically. We don’t want to take over anything. We are not interested at all in any political thing. But the politicians are simply trembling. I don’t see the point: why are they so afraid of us? Perhaps we are the people who can expose them — that they are against their own Constitution.

And I don’t think that Columbus had any visa or any green card, or any Americans who came in the beginning had any green card or any visa. But the people who have succeeded them have been holding back my green card for four years. If you want to say no, do you need four years? They are afraid to say no because they don’t have any grounds to say no. And once they say no, we move to the courts. Then it goes beyond their hands. Yes they cannot say, because of the pressure of the politicians.

The whole department has been working on my green card for four years. Great intelligence! They have never confronted a group of people like us. So it is very exciting to us, but to them it is a nightmare. So have a good nightmare! What can we do? We are ready to withdraw the nightmare if they just do the right thing — that which the Constitution allows. But you have to be ready and alert.Whatever happens will be a good experience.In fact, as far as I am concerned, I am really excited.

Source – from Osho Book “From Bondage to Freedom”