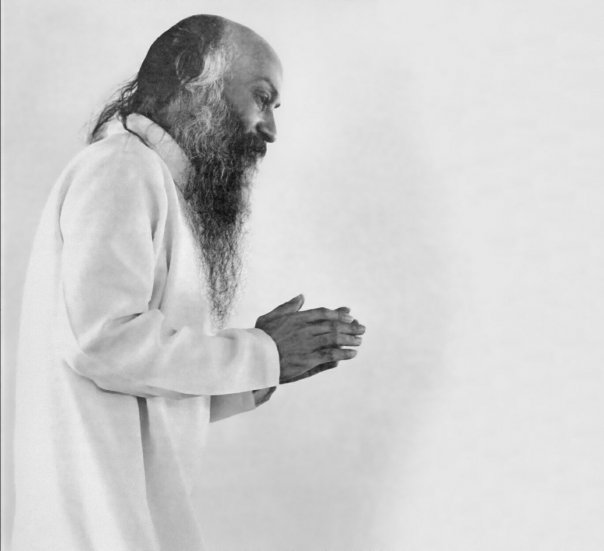 Question – Just a simple method of Meditation to suggest to Latin Lovers, So they may find their way?

Osho – The simplest method for lovers is, while they are making love they should make it a sacred experience. All the religions have destroyed the sacredness of love. They have condemned it as sin. And the conditioning has gone so deep in the human mind that people are making love in such a hurry, as if they want to finish it as quickly as possible.

Naturally, if it is a sin it is better finished soon. Their hearts are guilt-ridden, their minds completely full of sin. If lovers want to make love a meditative experience, then the first thing is to drop the idea that it is sin, that it is something wrong. It is something immensely beautiful, a tremendous gift of nature, of existence, for which you should not be guilty, you should be grateful! And to show your gratefulness you have to make a special place for it.

Every house and every couple which can afford it should have a separate room just for love: no other vibe there — no fight, no argument, no throwing of pillows. They should enter the room after taking a bath, as if they are going into a temple. The room should be full of beautiful burning incense; there should not be glaring lights — just candles, dim light.

So there are four persons, not two: the woman and the witness inside, the man and the witness inside. The witness is simply watching what the man is doing to the woman, what the woman is doing to the man. The witness has no judgment of good and bad; it is simply like a mirror, showing what is happening. This witnessing is nothing but awareness, alertness, consciousness. And particularly in the foreplay, if you are conscious, alert, then there is a possibility you both will know the exact time when your bodies are ready to make love. You will feel the bio-electricity of each other’s body.

When you start making love, don’t be in a hurry. Let the woman be always on top. The missionary posture is the worst posture in the whole world. In the East nobody knew before the Christians reached there that the man can be on top of the woman. It is so brutal, it is so ugly.

The woman is delicate, and a huge animal is doing pushups over her! In India it is called the missionary posture, because it was known only when missionaries came to India. They made India aware that this too is possible; otherwise, the woman is always to be on top. And scientifically it is right that the woman should be on top, because then she can be more active and the man can be less active. If the man is on the top, the woman cannot be more active, the man is more active. If he is more active, he comes to his ejaculation very soon, and the woman has not yet come to the point where she can have an orgasm.

If the woman is on top and she is active, and the man remains inactive, there is ever possibility that by the time the woman comes to orgasm the man will be coming to orgasm. And if both come to orgasm at the same time, then there is a tremendous meeting and merging, as if bodies disappear and two souls are no longer two souls, two beings are no longer two beings. And the witnessing continues. That is your inner work of meditation that goes on: you are witnessing.

After your orgasm has settled, slowly slowly disappearing, watch it. Watch as it is coming up, watch as it explodes, watch as it starts settling back again to the normal state of your bodies. Then don’t be in a hurry to separate from each other; remain together for awhile. In tantra that is called valley orgasm. That is not known to millions of people. The first orgasm was peak orgasm. You had met together on a peak of your energy, now the peak has disappeared. But every peak has a valley by its side; without a valley there can be no peak.

So if you can remain silently watching together, you will be amazed: there is another orgasm with a totally different beauty, a different depth, a different joy — the valley orgasm. Until the valley orgasm disappears and you come back again to normal, don’t separate. Meanwhile, all the time the witnessing continues. When you separate, don’t just start going to sleep. Something very essential is still there, and that is the afterplay. You have made such a turmoil in the whole energy of each other’s bodies, minds, that it is needed. You massage each other’s bodies, play with each other’s body, and have beautiful incense, flowers, candlelight, music… if you feel like dancing, you dance.

And you are in for a great surprise. All that has been happening with the woman starts happening just inside you, without the woman or without the man. You start moving slowly to the peak orgasm — the same experience with no physical, no biological expression — and you reach to the valley orgasm, the same experience. You have learned meditation through love, and you have also learned love through meditation; they will go on enriching each other.

This will bring maturity to both the persons, and the maturity will release their repressed intelligence, awareness, lovingness, compassion. And it will destroy jealously, anger, hatred. it will bring tremendous changes in you. Those changes will be the proof that you are on the right track.