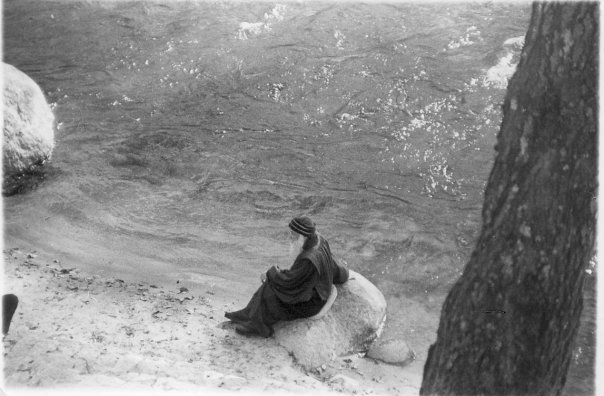 (Osho hands Tantra Mridani her sannyas name with the comments)

Two individuals can come to a union only for a moment — it is temporary, fleeting dreamlike. For one moment it is there and then it is gone. In fact before you have recognised that it is there it is no more there, Hence ordinary love brings both — the ecstasy which is momentary, and after the ecstasy, the dark night, the despair, the agony. Both these experiences are so mixed, so deeply mixed, that people hare chosen either one or the other. Those who have chosen the first, the ecstasy part, they believe in love; and those who have chosen the other part, the agony part, they emphasise renunciation of the world. But both have come out of the experience of love. They are like two sides of the same coin.

You can choose one side, the other side will be hidden beneath it; you cannot discard it. So those who live in the world are always attracted by the monks living in the monasteries, in the caves. Those who are worldly are always respectful of the other — worldly. The worldly people in a thousand and one ways are fascinated by the spiritual people. In fact only the worldly are infatuated with the spiritual people, and this you can see everywhere — for example, in India. The country is very materialistic, the people are very worldly, clinging to small things but their respect always goes to the saints, to those who have renounced everything.

It looks a contradiction but it is only apparently a contradiction. Deep down it has significances the worldly person knows the momentary joy of love and then he knows the long despair that follows so he understands when the spiritual, the so-called spiritual condemns love, condemns sex, condemns the world. He understands perfectly well that he is right — it is his own experience too.

For centuries all over the world people have been making love in the night before they go to sleep, for the simple reason to avoid the darker part. So you reach sexual orgasm, you enjoy it for a moment, and then you fall asleep. This is a trick, a strategy, to avoid the other side of the coin. because it hurts. Reaching to such a peak and then falling to such a depth. reaching to a sunlit peak and then falling into a dark valley hurts very much. It is better to fall asleep.

For millions of people sex is nothing but a kind of tranquilliser. It relaxes them into a good sleep. But even if one falls into sleep one cannot absolutely avoid the despair — it lingers, it is there. And you cannot fall asleep immediately either. Even if you are awake for a few minutes you know that you had come to a height and now it is no more there; and again there is the longing for it It becomes a vicious circle; again and again you reach the peak, again and again you fall back.

So when the spiritual, the so-called spiritual — the saints, the priests, the life-condemners, the life-poisoners — condemn your life, your ways of life, your love affairs, deep down you agree, you know they are right. And on the other side they — the saints, the monks, the nuns — also feel that perhaps they are missing, perhaps the worldly people are enjoying themselves. Hence their attack on world; their condemnation becomes more sharpened. That is a revenge, because they are missing even those moments.

By missing those moments of course you will not feel your agony so much because there will be no contrast, but the agony is there. Even if the contrast is not there, how can you feel that you are on the peak? — you are in the dark valley. It is more comfortable in a way because you move on the same plane. The worldly person goes up and down, up and down again and again; his life is a little chaotic. The monk’s life in the monastery moves in a very smooth pattern — smooth, certainly, but without any joy. Even those small moments of ecstasy are missing. So he is angry — angry with all those people who are enjoying themselves. His anger comes out in condemnation.

The fundamental secret is: whenever you are making love to anybody, remember, the person is only a window. Don’t become too interested in the frame of the window; the person is only a window — you are making love to the universe! So don’t become attached to the window. There are others windows, there are other doors, and if one is courageous enough there is no need for windows and door, one can come out in the open — -the whole sky is available! (laughter) That’s exactly the meaning of your name, making love to the stars and the sky and the clouds.

Slowly slowly one dissolves into the cosmos. The secret should be remembered: never become attached to individuals; they are only small windows into the universal. Remember the universal. Thank the individual but remember the universal. Be grateful to the individual but don’t become attached, don’t become possessive and don’t be possessed.
If one can avoid being possessed and being possessive then doors upon doors go on opening and one day all the walls disappear. You are suddenly under the sky. The whole existence becomes your love affair.