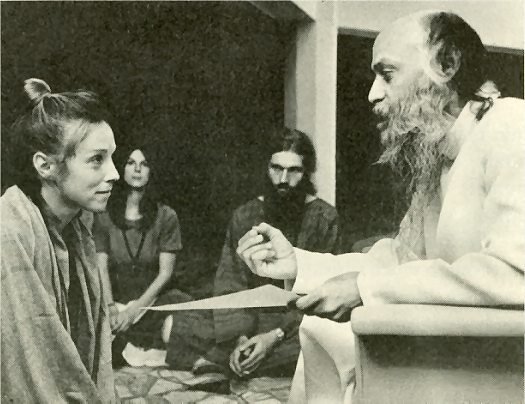 [A sannyasin asks about his brother, a former drug-taker and now a religious fanatic, who spends the day lying on his bed.]
Osho – I understand the type. The only way to bring him out is not to argue with him – the first thing… not to give him any indication that you want to bring him out of his state, otherwise he will defend himself. Even if he suspects, that’s enough, and he will undo all your efforts.

So the first thing: don’t give him any suspicion, any idea, that you want to bring him out. Rather, when you go, feel very happy – at least pretend to be very happy – and you tell him that he is in a great spiritual state; that will be the right beginning for him. Sympathise with him. Not only that – respect him; that’s what he needs. Then you can become close to him, he will take you into his confidence, otherwise not.

This type of person is very defensive. So when you go, just tell him that he is in a perfect state, this is the right state to be in. Ask him to teach you also how to be in it. Be a disciple rather than a teacher; then you can pull him out. He needs to be pulled out. Deep down he will like to be pulled out, but his ego will create difficulty.

So give him the feeling that the parents are wrong, that everybody is wrong – he is right. Once he takes you into his confidence then things will become very easy. By and by you can motivate him to come back to life. For example, how to motivate him? There is no hurry: for one week simply wait, just go and sit by his side, be meditative. Let him feel that you are learning something from him, that he is in some higher state, mm? Pretend it as much as you can – it will be just acting but it will help him to come out.

Then once he starts being close to you and takes you into his confidence, tell him that he has such a great experience – now it is to be shared with people. This is his duty, so he should come out of his lethargy, should share it with people… at least share it with you. Make him talk to you; don’t try to talk to him. Talking to him will be talking to a madman, a deaf man – it will not be of any use. And talking to him you will feel tired, exhausted. When you are talking to a wall, you feel tired. When there is some response, you feel happy – then your effort is bringing some fruit.

When you are talking to a wall how long can you talk? You can go on dissipating your energy and you feel exploited, sucked out. These people who fall into such a neurotic lethargy become suckers unknowingly. They become like a low place, so whenever you are close by, your energy starts flowing towards them – not that they do it knowingly; it happens naturally. They are like a hole. So let him talk to you, provoke him to talk.

Just give provocation, just small starts – that is the whole art of bringing him out. Tell him, ’You have got so much and the world needs it, people are in tremendous need. So come out of it – start at least telling me what you have experienced and where you are going.’ Once he starts talking, things will become very easy. If he can be persuaded to talk, he can be persuaded to do anything. Then by and by tell him to come out, to talk to the family, and tell your parents also that this is the way to bring him out: listen to him.

Mad people enjoy it tremendously if somebody listens to them. If a madman can find a person who listens sympathetically, the madness will disappear. That’s all that psychoanalysis is about. You pay the psychoanalyst to listen to you sympathetically, so that he is at least in sympathy. And just through talking to a psychoanalyst, day by day, you start coming out go through a unwinding process. That boy needs unwinding and you can help.

Once he starts talking with you then sometimes sitting by his side, start meditating. Tell him just by the way, what you have been doing in india… tell him that he is far higher than you. Once that is settled – that he is higher than you – then there is no fear from your side. Then he will not be defensive: he will ask about meditations and what you are doing; he will start doing them! But the first basic point is that he becomes perfectly confident that you are not the enemy but a follower. Go and try. And this will be very good for you too – if you can bring him out… and you can! One just has to be very very artful.

The greatest art needed in life is to bring a madman to sanity. You will be helped tremendously if you can pull him out. It will help you to understand your own mind, because in fact it is everybody’s mind. People move from one extreme to another: first he was thinking that lsd is divine; now he thinks it is devilish.

Source: from Osho book “This Is It”