Osho – The mind is a chattering box. You cannot stop it 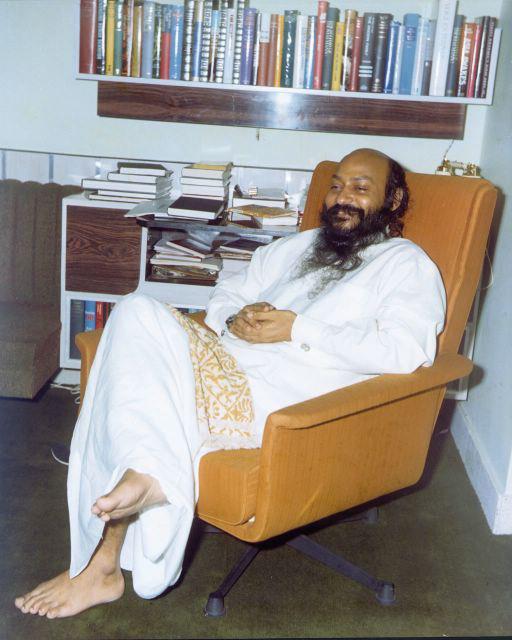 Osho – The mind is a chattering box. You cannot stop it. The very effort to stop it gives it more nourishment to go on. Millions of people, for centuries have been trying to stop it, and they have all failed, for the simple reason that the desire to stop it is also part of it. It is not beyond it.

One side of the mind is desiring the other side of the mind to become silent. This is not possible. The only way few people have been able to stop it without making an effort to stop it, are the people who have disidentified themselves with the mind. There is not even a desire to stop it or to continue it, because all desires belong to it.

One simply watches it. Let it chatter. You simply become a watcher. Let the traffic of thoughts move. There is nothing to be worried. It is going to harm nobody. These thoughts are only soap bubbles. Don’t take them seriously. Don’t become tense while watching them. Be relaxed.

I will tell you a story to understand it. Gautam Buddha told one day, while they were passing into a mountainous region — it was the midday, hot sun and he was getting old — he told his disciple, Ananda, that “I am very thirsty. You should go back. Because while we had been we had passed a small current of the mountainous water, few bullock carts have passed through the current, making it muddy. Dead leaves, which may have rested in the bed, are floating over the water, It was not worth drinking. And particularly for Gautam Buddha he could not take that water.

He knew that, if he goes ahead, where he had left Gautam Buddha, then five miles ahead of that place there is a big river and he can find good crystalclear water. He came back empty-handed. Buddha was very strict. He said, “You go back and you bring that water, because I remember when we had passed, it was so pure and so crystalclear.” But Ananda said, “You should understand me. In the meantime some bullock carts have passed.”

Buddha said, “I understand, but you go sit by the side of the bank — however long it takes. You just go and sit there. Don’t get into the current, because your getting into the current will make it muddy again. You simply wait, watching, doing nothing. All those dead leaves will be taken away. The mud will settle down. Then you fill the begging bowl and come back.”

Ananda wanted to go ahead towards the river, but he could not disobey Gautam Buddha. Unwillingly, he went back — but he was for a great surprise. By the time he reached there, the miracle has already happened. The dead leaves had moved with the current, and the mud has already settled. And the water was as clean and as pure as it could be.

Taking that bottle back, he tried to figure out why Gautam Buddha insisted, because he never does anything without some purpose behind it, some meaning behind it. And then he realized on the way, that it is a message to him, that “Ananda, don’t get into the river, into the current of the mind. That’s what you have been doing all your life. Just wait on the bank, and simply watch.

It is one of the secrets of inner life, that as your watcher becomes more and more strong, the thoughts become less and less. It is exactly in proportion. When there are hundred percent thoughts in the mind, you have zero watcher. When you have ten percent consciousness involved in watching, ten percent of your thoughts will disappear — because it is the same energy that creates thoughts, that creates the watcher.

When you are hundred percent a watcher, a pure witness, a mirror, all thoughts disappear. You cannot stop them, but you can manage a situation, a device in which they get stopped. They simply disappear. And to know such a state, when you are aware and alert, fully conscious and watchful and there are no thoughts there, your whole consciousness for the first time in your life returns back on itself. Becomes aware of awareness. You become conscious of consciousness.

In the silence, when the chattering mind is no more there, one realizes oneself. Unless the mind is silent, you cannot realize yourself. You will remain involved with the thoughts and those thoughts are almost meaningless — memories, fragments of memories, imagination, dreams, daydreams, all mixed up. It is a chaos. Even if sometimes you find some beautiful thoughts moving, they are all borrowed. You have heard them, you have read them, but they are not yours. And that which is not yours is not true.

This has to be remembered. Everything borrowed is untrue. Only your own realization can give you authentic truth. You can recite the whole Bible or the Koran or Dhammapada — it does not matter. You are simply being a parrot, and sometimes even worse than a parrot.

I have heard about a bishop whose pet parrot has died, and he was missing the parrot very much. It was such a religious parrot. He used to repeat the whole sermon on the mount. And it was such a joy for anybody to come and listen to the parrot, so he went to the biggest petshop and wanted some religious kind, some spiritual parrot. The shopkeeper said, “What are you talking about? Parrots and spiritual?”

He said, “Yes. I had one, and with great effort made him learn the whole sermon on the mount, and he used to repeat it with perfection.” The shopkeeper said, “Now I ko understand what you mean by spiritual. You mean the parrot who can repeat scriptures. I have something for you you would love.”

He took him inside the shop. He said. “It is a very special parrot and I was keeping it for myself — but you are in such a desperate need and you are missing your own parrot which is dead, I will be happy to give it to you. Before you take it, let me introduce you about its qualities. Just watch and you will see one thread hanging by its right leg, another thread hanging by his left leg. The threads are very thin. Nobody can see them unless one comes very close. You have just to pull the thread of the right leg and he will repeat the sermon on the mount.”

“But sometimes you may be having a visitor, who is not a Christian. Then you have to pull the left leg. Then he repeats a beautiful portion, in pure Sanskrit, of Srimad Bhagavat Gita.”

The bishop was enchanted to find such a rare parrot. He asked the shopkeeper, “And if I pull both the threads together?” Before the shopkeeper was going to say anything, the parrot said, “You idiot. I will fall on my ass. Never do that!”

Even parrots are more intelligent that your bishops, your pandits, your rabbis. Even the parrot said, “This is absolute stupidity.”

But for centuries people have used their mind almost like a parrot, and have thought that they are spiritual, that they are religious. Now all that can be done by a computer more perfectly, but a computer is not religious, not spiritual. Neither you are, just by repeating words from scriptures. Don’t be a His Master’s gramophone record!

It is below humanity. And it good of the company that makes those records, that they have chosen a dog as their symbol! His Master’s Voice. But what millions of people are doing in the world, then repeating His Master’s Voice? Their masters may be different, but the function of the dog is the same.

The mind can stop, but not by your effort but by your effortless witnessing. That is the whole meaning of meditation. Relax. Don’t force, and just watch. Let the mind do its things. It will take a little patience, but it has always happened. It is almost a scientific law, without exception, that if you can manage a little patience you will come to a point where the watcher is nourished and the mind becomes unnourished, and the thoughts start disappearing. When the whole energy of your consciousness moves into watching, you will find there is no mind at all. And to know a state of no-mind is the greatest experience in life a man is capable of. It is ecstasy. It is superconsciousness. It is self-realization. There is nothing higher than that.

4 thoughts on “Osho – The mind is a chattering box. You cannot stop it”