Osho – The moment life is non problematic, it has significance 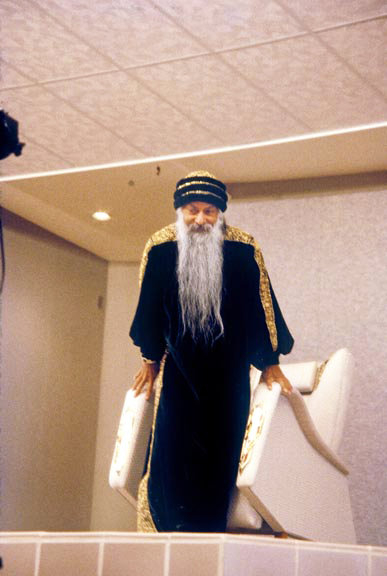 Osho – Bliss follows him like a shadow. It is natural, spontaneous, not something cultivated or practiced, because wisdom is nothing but the arising of a witnessing consciousness in you. Wisdom is not knowledge, wisdom is the realization of your interiority. It is not information, it is experience.

You cannot accumulate it from others or from scriptures. Universities cannot give it to you — nobody can give it to you, you have to arrive at it on your own. It is something hidden in the deepest recesses of your being. You have to discover it. It is not in the books, it is not with the teachers. It is already in you, you are born with it. But we never look in, we go on looking out, hence so much foolishness in the world.

To look in is the first and the last step of intelligence, because once you look in there is nothing worth looking out for. Once you look in, you have seen the greatest treasure of existence; you have encountered God! Now there is nothing more valuable, more precious. All desires simply disappear the moment you look in. Desire simply makes you a beggar, and when desires disappear the beggar is gone: you become a king or a queen. That’s the whole effort of sannyas: to create kings and queens, to give you the key of the kingdom of God. The whole emphasis is on meditativeness, inwardness.

We are accustomed to the outside world and absolutely unaccustomed to the inside. This is the only problem, the problem of all problems, the root problem. You can go on solving other problems and nothing will be solved because you are only pruning the leaves, the foliage — at the most, the branches. But the root is there and the tree will go on growing. It will bring new leaves, new foliage, new branches. In fact the more you prune it, the thicker they will become.

That is one of the most fundamental things the modern man has to understand: for the first time we are capable of pruning many leaves, we have developed the technology of pruning. That’s what is called psychoanalysis: it is the technology of pruning the leaves. The more you prune the leaves, the thicker becomes the foliage, the deeper becomes the problem of humanity, the greater becomes the anguish. More and more people are feeling that the whole thing is an absurd joke, the thing called life; it is ridiculous. So many people are feeling it, to different degrees of course. The more intelligent a person is, the more he feels that life has no meaning. And the reason is that we have forgotten how to cut the root which creates all the problems.

The moment life is non problematic, it has significance, it has a glory; something divine in it starts growing. Once problems disappear energy is released, the energy that was involved in the problems, and that energy becomes your growth. That’s what we are doing here. We are not concerned with pruning the leaves: our concern is cutting the very root of all problems.