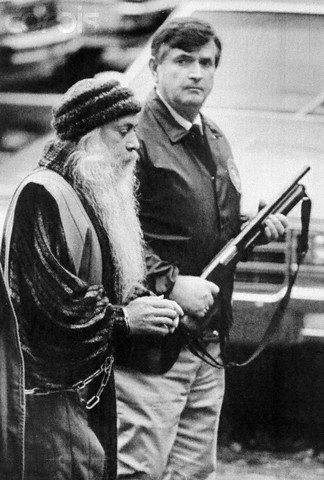 [A group member says: All the emotional things, catharting things, seemed to be superficial on the one side, yet on the other seemed to be true, as I feel them. I don’t know if it is because of my knowing it or…. It’s not acting or theatre, because I feel it. Perhaps it’s because I’m aware of it, and that’s why I see the difference, that’s why I see myself doing it.]

Osho – If you become aware, then everything becomes superficial, outside you. When a moment of awareness is there, then nothing is deep; everything is outer and superficial because you are standing at the innermost core of your being. From that vantage point everything is superficial. For example we are sitting here in the porch. It is not on the outer or superficial, but from inside the house it will be just on the boundary, on the surface.

The more aware you become, the more things will become superficial. One can become scared sometimes, because even love will look superficial. If you watch and are alert, then whatsoever you do will look like acting, because you are no longer identified with it. It is no longer an act, but acting.

So a really aware person becomes an actor on the great stage of the world. He is never in anything deeply. He cannot be, because something transcendental is always there. Whatsoever he is doing he is always far away. Not that he is not authentic. He is, but he is so deep himself that nothing can be deeper; anything relative is superficial This is a good insight. Nourish and enjoy it more, and don’t start condemning because then you will miss the whole point. Don’t start saying that this is superficial and that nothing deeper is coming – there is nothing deeper.

When consciousness is there, that is the most profound and the deepest thing there is. Even if God is standing there He will be superficial, because He cannot be deeper than your awareness. He will be an object of awareness, just like any other object. Your consciousness is depth itself, abysmal. So it has been a good insight.

Now try to live it twenty-four hours a day. Accept it, and don’t condemn it. It is beautiful, and everything will look superficial and like acting.

Osho – One has to go inward. And you have roamed outward long enough

One thought on “Osho – The more aware you become, the more things will become superficial”