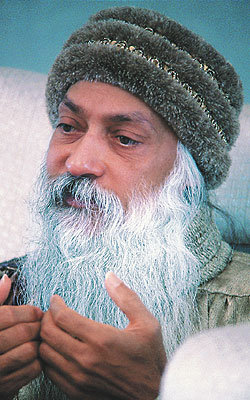 Osho – The ego is cowardice. Cowardice is not an essential part of the ego, it is the whole of the ego. And it is bound to be so, because the ego lives in constant fear of being exposed: it is empty within, it is non-existential; it is only an appearance, not a reality. And whenever something is only an appearance, a mirage, the fear is bound to be there at the very center of it.

In the desert you see the mirage from far away. It looks so real that even the trees standing by its side are reflected in the water, which does not exist. You can see the trees and you can see the reflection; you can see the waves in the water and also the reflections shimmering with the waves – but it is all from a distance. As you come closer, the mirage starts disappearing. There has never been anything; it was just a byproduct of the sunrays being reflected by the hot sands of the desert.

In this reflection and the sunrays returning, the mirage of an oasis is created. But it can exist only when you are far way; it cannot exist when you come close. Then, there are only hot sands, and you can see the rays of the sun being reflected back.

It will be easier to understand in a different context. You see the moon, you see its beauty, you see its cool light. But the first astronauts were shocked, because as they came closer to the moon, there was no light. The moon was just a flat, barren piece of earth – no greenery, no life – a dead rock. But standing on the moon, when they looked at the earth they were amazed: the earth was radiant with beautiful light.

In comparison to that light, the moon and its beauty is nothing, because the earth is eight times bigger than the moon; its light is eight times more intense, all silver. And the astronauts knew that it was all false, but they were seeing it. It is not there… but a strange thing: when they were on the earth, they were seeing the beautiful silver light shimmering from the moon. Now they were on the moon, and it was just a dead rock, and the whole beauty was radiating from the earth. And they knew the earth, they have lived their whole lives on the earth; they had never seen anything of the sort. To see the reflection of the sunlight, you need a distance.

The earth is also radiating: when the sunlight comes, some of it is absorbed by the earth, but most of it is reflected back. That reflected light can be seen only when you are far away from the earth; otherwise you cannot see it. The ego is a non-existential phenomenon – the people who are farther away from you can feel it, can see it, can be hurt by it.

Your only concern is that they should not come too close. Everybody is keeping everybody else at a distance, because to allow people to come too close means opening the doors of your emptiness. The ego does not exist. And you are so identified with the ego that the death of the ego, the disappearance of the ego feels as if it is your death. It is not so; on the contrary, when the ego is dead then you will know your reality, your essential being. The egoist is going to be a coward. He cannot allow anybody closeness of any kind – friendship, love, even companionship.

Adolf Hitler never allowed anybody to sleep in his room. He always slept alone, locking the door from within. He never got married for the simple reason that if you are married then you have to allow the woman inside the room – not only inside the room, but in the bed. This is too close and too dangerous.

He had no friends. He always kept people as distant as possible; there was not a single person in his whole life who had ever put a hand on his shoulders – this much closeness he would not allow. What was the fear? Why was he so afraid? The fear was that the moment he allowed anybody such closeness, his greatness – ”the great Adolf Hitler” – would disappear. You would find a very tiny and pygmy creature, nothing of greatness – that was all on the posters, that was all part of a great propaganda.

The more egoist a person is the more he has to remain lonely. And to be lonely is miserable, but one has to pay. You have to pay for a non-existential ego to appear real – with your misery, with your pain, with your anguish. And anyway, even if you succeed in not allowing anybody to be close to you, you yourself know perfectly well that it is just a soap bubble – a small pinprick, and it will disappear.