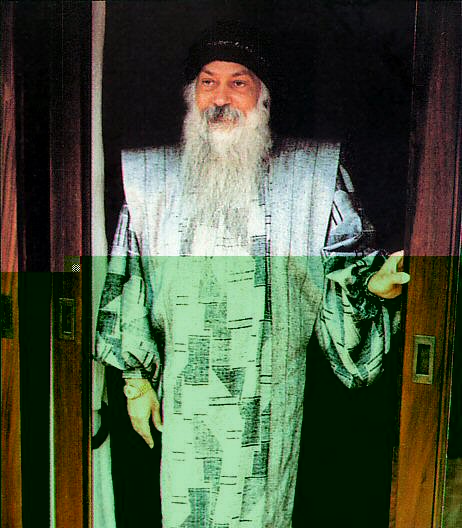 Question – Bhagwan, you have said that people need to experience material wealth in their lives before spiritual growth can happen. Why then do so many people in wealthy, developed countries, suffer from mental diseases?

Osho – The cause is the religions. The wealthy people in the West get bored with their riches. They are finished with their wealth, but they don’t know where to go. And what their religions provide is false, it leads to madness. The false cannot lead you to health. It is dangerous.

The false may be a consolation to the poor, because he is not yet finished with materialism. So the false religion, the churches, can console the poor, that “You will have all these things in the future life, in paradise, just be patient, just keep quiet. Don’t be discontent. This is a fire-test by god. Pass through it calmly, coolly.” But this cannot be a consolation to a wealthy man, because whatever your paradise provides, more than that they already have. This is the cause of their madness. They need some real, authentic spirituality, which is not available to them. And your religions prevent them from moving in directions where they can find it.

Your religions program their minds, that they go on clinging to Christianity or Judaism or any other -ism, not knowing that except truth there is no health and there is no wholeness and there is no freedom. And the truth is found in meditation, not in prayers, not in churches, not in the BIBLE, not in the KORAN. It is found when you are silent, utterly silent. In that purity of awareness begins a totally new kind of life, ecstatic.

Full of joy and light. Full of blessings and benediction. So it is very clear why in the West so many wealthy people are going mad. The Christianity or Judaism are responsible. If the wealthy people go mad in the East, then Hinduism, Buddhism, Jainism, Mohammedanism — these will be responsible.

The pressure of remaining in a situation which is absolutely nothing but discontent, and you don’t allow him to move from there. You want him still to be Christian, still to be a Hindu. You are driving him mad. All the churches of the world are responsible. They have consoled the poor to remain poor and they are preventing the rich to go on an individual pilgrimage.

They are creating hell for both. Of course the hell for the rich is bigger, because there is no consolation for him. Whatever they have to offer in paradise, he has lived it so it can’t be a consolation, it can’t be a hope. His material success has destroyed any possibility of hope in your so-called paradises, heavens. Now he has to live hopelessly, in the same church, in the same crowd. He has to be a hypocrite. How long he can manage the tension? Sooner or later he breaks down.

All that is needed is that he should get out of the church, out of the crowd, and out of the programming that those churches have done on him so he can be alone. And he can move on his own in search of truth. This world does not provide any truth, any blissfulness. And the religions of this world are only talking, of the same pleasures in the next world. For the wealthy it has not meaning. He knows that even in paradise he will be discontented.

And to live in a hopeless state, where you cannot find any exit, naturally is going to create a nervous breakdown. One of Jean-Paul Sartre’s books has the name `No Exit’, and the book describes hell. It is not the old hell, where you are burnt into fire and you are cut into pieces and tortured. No, there is nothing of it. It is a contemporary hell. The only thing hellish is that there is no exit.

And that is the situation of the wealthy man in the West. What I have said is absolutely true. This is the moment, if the man has courage enough to move out of the mob mind and takes the responsibility of freedom and searches for truth, searches for masters who can help personally and intimately — he will become a new man, rather than becoming a madman.