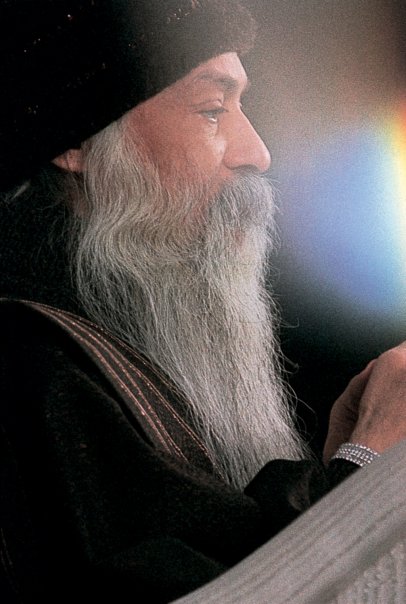 Osho – I have told you the story many times about Gautam Buddha. One day, walking on the road from one town to another, he was talking to Ananda. A fly sat on his forehead, and just as you do automatically, he remained engaged in talking to Ananda and shooed the fly. Then he suddenly stopped, and he again raised his hand, with great grace, and moved the hand. Ananda was absolutely puzzled. He said, ”The fly is gone. What are you doing?”

He said, ”I did that act mechanically. I continued to talk to you and I left the functioning mind, the automatic mind to do the work of shooing the fly. But I was not aware. I did it, but without any original awareness. Now I am doing it as I should have done it.”

Another time he was passing through a village, and thousands of people were against him, as it is bound to be. Only little people are respectable; great people are greatly condemned. The enemies had gathered and they started abusing him in as ugly language as possible. He listened, standing silently, just like Basho. Those people felt a little embarrassed that he was not answering anything. Buddha said, ”You just complete your thing, because I have to go to the other town. And for you to contemplate a thing… In the previous town people love me and they had brought sweets and flowers and many presents. I cannot carry them – it is not possible for me to carry things – so I told those people to go back and distribute all these sweets and flowers to the people of the village from me.

”Now I ask you – you have come with abuse, ugly words, nasty expressions. I don’t accept them. You have come too late. You should have come ten years ago and there would have been bloodshed. These hands are of a warrior. Ten years ago, if a single word that you have said to me had been uttered, all these heads would be rolling on the ground. But fortunately you have come a little late. Now I don’t function as an automatic machine. I can see you are ignorant people, I can see your unconsciousness – and unless I take your abuse, you cannot give it to me.

”You will have to take all this garbage that you have brought back home. What will you do with it? – distribute it on my behalf to the whole village. And if something is left to say, when I am returning again by the same road, I will make it a point to stay here one day. You can blame me, you can tell as many lies, complaints as you want, but remember, unless I take them, your work is absolutely futile. You are talking to the skies. Not even a scratch has happened to me by your talk. I simply enjoyed it. Thank you.” And he moved on.

Ananda, his disciple – because he was also a warrior, and a cousin-brother of Gautam Buddha – said, ”I was forgetting completely your whole idea of compassion and kindness and love. I was getting ready to cut off their heads. I was just looking for my sword – but I could not do anything in your presence. I had forgotten completely.”

Ananda remained unenlightened until Buddha’s death. He became enlightened after Gautam Buddha’s death, the next day. And Gautam Buddha had said, ”You will remain unenlightened while I am alive. Your attachment to me is a barrier. Your love towards me is a barrier. You cannot forget that you are my cousin-brother. That prevents you from becoming a disciple, so your disciplehood is just hypocrisy. And I know you are helpless, you cannot do anything. You try to do everything, but trying to do is one thing, and its arising spontaneously is another.”

And the strange thing is that it actually happened the day Buddha died. The next day, Ananda did not move from the place where he was sitting the whole day without food, without water. Everybody wanted to help him. It was such a shock, because he had been for forty-two years continuously in service, day and night, never bothering about himself, but Buddha should have all the comforts possible. Perhaps the shock was too much. He had closed his eyes and was just sitting like a stone statue. But nobody dared to disturb him either. It was too delicate a matter. Only by the evening of the next day he opened his eyes and he said, ”After all he was right. Now you can cut off my head, but you will not scratch my consciousness.”

So the functioning consciousness is one thing; everybody has it. You have to find out the deeper original witness which can witness your body, your mind, your thoughts, your actions, and still remain far away from any attachment or judgment. This discovery is the greatest discovery in the history of consciousness. No discovery of science or of any other subject, mathematics, or logic, or philosophy – no discovery can be bigger, greater, with more splendor, with more ultimate categorical character than the discovery of the witness. The witness makes you a buddha.

Source – Osho Book “Isan: No Footprints in the Blue Sky”

3 thoughts on “Osho – The witness makes you a buddha”