Osho – There are a thousand and one ways to go away from me, there is only one way to come near me 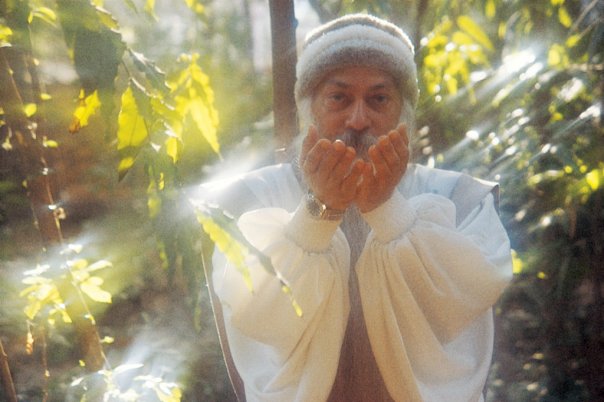 Question – I want to come close to you, Osho, But I enjoy being in open spaces and by the Sea. So what to do?

Osho – I don’t see the problem. Can you find a more open space than me? And can you find a more wild sea than me? I am absolute lawlessness. There is no problem. Don’t try to create a problem where none exists. Just look into my eyes: I am the sea you are seeking, and I am the vast empty space you have always been searching for through many of your Lives.

Now by chance, just coincidentally you are close to me. Don’t miss this opportunity. There are many ways to miss it, there is only one way not to miss it. There are a thousand and one ways to go away from me, there is only one way to come near me. So it is almost impossible that you will be able to come near me, because the possibility to go astray is more — one thousand and one.

You can find so many reasons to go away from me, and you can justify them, you can rationalize and you can feel perfectly right in going away from me. But to come close to me is going to be arduous and difficult, because everybody wants freedom. At least, everybody THINKS that they want freedom. But I rarely come across a man who really wants freedom; he thinks he wants freedom. Because to be free means to be nobody. If you are somebody, that ‘somebodiness’ will be your imprisonment.

To find infinite space means that you will have to dissolve. Because you create, you go on creating your boundaries around you. To move to the wild sea, uncharted, you will have to throw all your maps, all your scriptures, all your religions, all your concepts and ideologies. To move into space which has no boundaries to it, is to die: to die to the known and to trust the unknown, which is the most difficult thing in the world.

I will tell you one story. It is a very ancient story, and one of the most beautiful I have ever come across.

There was a very wise king. His own prime minister committed a betrayal: he delivered some secrets to the neighboring country, to the enemy. The prime minister was caught red-handed. There was only one punishment for it, and that was death. But the old king had always loved this man. He was sentenced to death, but the old man gave him an opportunity.

The prime minister asked,’What is behind that black door?’ The king said,’That is not allowed. Nobody knows, because nobody has chosen it before. In the times of my father, in the times of my grandfather, many times the opportunity had been given, but nobody has chosen and nobody knows. And nobody is allowed; even I don’t know. I have the key, but when my father died he said to me,’I will open the door and you can go in and I will close it. Don’t look into it.’ But you can see because — you can choose. You can discover what is there. It is up to you.’

The prime minister brooded and brooded, and then he chose the gun. He said,’Kill me with the gun. I don’t want to go behind that black door.’ The prime minister was killed. The queen was very curious. She persuaded the king somehow to see what was behind it. The king laughed. He said,’I know — there is nothing behind it. It’s simple freedom; there is not even a room. This door opens to the wide world. There is nothing, but nobody has chosen it yet.’

You are dying every day, but you still cling to this life which gives you nothing except death. You choose death, you don’t choose real life. Real life is hazardous, insecure. You talk about wild seas, you talk about infinite spaces: look into me, and you will get scared. Look deeply into me, and you will become afraid. There is only one way to come near me, and that is to love. To love me is to die to the past. To love means to trust, to surrender. And there is no problem. If you really love open spaces and the wild sea, I invite you.

Source – from Osho Book “Come Follow to you, vol4”