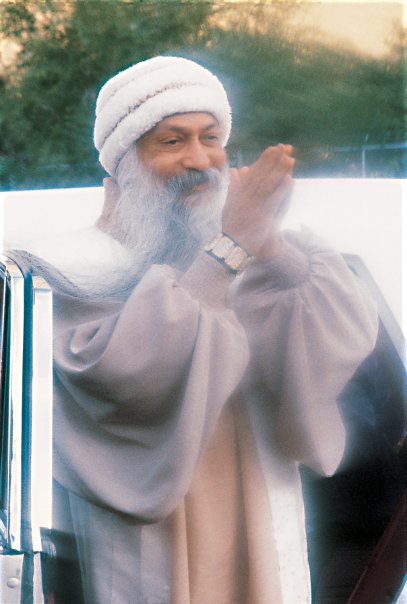 Become more interested in persons. Even while relating with things, relate to them as if you are relating with persons. Even if you take a book in your hand, take it with such respect that the book is no more a thing. You confer a personality on it. You eat food…. Eat with such reverence that food is not just food; it becomes a sacrament. Even the shoes should be used with tremendous respect. By and by you will be able to see even about things, that they are not just things. They are also people.

And just the contrary is happening in the world. People are treating people as things. A husband tends to treat his wife as a thing, something to be used. The wife goes on treating the husband as a thing. This I call the materialist dimension – when you treat a person as a thing. When you start treating even things as persons, the dimension of the
divine opens its door for you.

The dimension of the divine is nothing but a capacity to feel the presence of god everywhere, howsoever hidden. In a rock he may be fast asleep, but he is there. In a man he has come a little of age, has become more alert. In a buddha or a jesus he is totally alert, fully awake. But between a buddha and a rock there is a bridge. The rock can become a buddha one day. And one day buddha was also a rock.

Every sinner has a future and every saint has a past – and that is the bridge. So I give you this name, deva ayama, so you can start figuring out how to change from the materialist dimension towards the divine dimension. It is just a shift of consciousness. One need not escape from the world. But one needs to look into things so deeply that everything attains to a centre and becomes a shore.

So this is going to be your path. Treat every person with tremendous respect – even your child, because he too is god’s only begotten son. He is also a manifestation of the divine. In a thousand and one forms the same energy is manifested.

And when you start looking into others and you drop the materialist illusion about people and things, you will become capable of looking inwards more and more. Whatsoever you do to others, you will do to yourself. If you have a deep respect for people’s souls, your own soul will come.