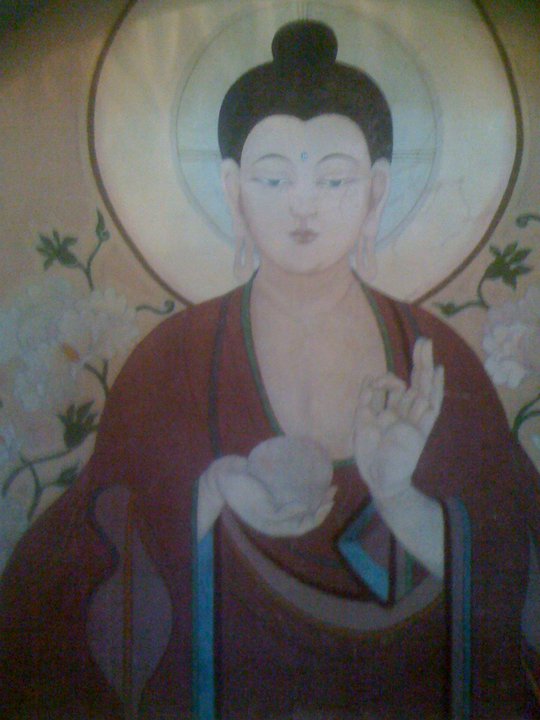 Time is the world and eternity is God; horizontal is the world, vertical is God. Both meet at a point — that is where Jesus is crucified. Both meet, the horizontal and the vertical, at a point — that point is here and now. From here and now you can go on two journeys: one journey in the world, in the future; the other journey into God, into depth. Become more and more aware, become more and more alert and sensitive to the present.

What will you do? How can it become possible? — because you are so fast asleep that you can make that a dream also. You can make that itself a thinking object, a thinking process. You can become so tense about it that just because of it you cannot be in the present. If you think too much about how to be in the present, this thinking won’t help. If you feel too much guilt… if you sometimes move into the past you will; it has been such a long routine and sometimes you will start thinking about the future — immediately you will feel guilty that you have committed a sin again. Don’t become guilty; understand the sin but don’t become guilty — and this is very, very delicate. If you become guilty you have missed the whole thing. Now, in a new way, the old pattern starts: now you feel guilty because you have missed the present. Now you are thinking about the past because that present is no longer present; it is past and you are feeling guilty about it — you are still missing.

So remember one thing: whenever you remember that you have gone to the past or into the future, don’t create a problem out of it; simply come to the present, not creating any problem. It’s okay! Simply bring back your awareness. You will miss millions of times; it is not going to happen right now, immediately. It can happen, but it cannot happen because of you. It is such a long, long, fixed mode of behavior that you cannot change it right now. But no worry, God is not in a hurry; eternity can wait eternally.

Don’t create a tension about it. Whenever you feel you have missed, come back, that’s all. Don’t feel guilty; that’s a trick of the mind, now it is again playing a game. Don’t repent: “I again forgot.” Just when you think, come back to whatsoever you are doing: taking your bath, come back; eating your food, come back; going for a walk, come back. The moment you feel you are not here and now, come back — simply, innocently. Don’t create guilt. If you become guilty then you miss the point.

There is sin and there is no guilt — but difficult for you. If you feel there is something wrong, you become immediately guilty. The mind is very, very cunning. If you become guilty the game has started now; on new ground but the game is old. People come to me, they say, “We go on forgetting.” They are so sad when they say, “We go on forgetting. We try but we remember only for a few seconds. We remain alert, selfremembering, then again it is lost — what to do?” Nothing can be done. It is not a question of doing at all. What can you do? The only thing that can be done is not to create guilt. Simply come back.

The more you come back… simply, remember, not with a very serious face, not with much effort; simply, innocently, not creating a problem out of it, because eternity has no problems. All problems exist on the horizontal plane; this problem will also exist on the horizontal plane. The vertical plane knows no problems, it is sheer delight; without any anxiety, without any anguish, without any worry, any guilt, nothing. Be simple and come back.

You will miss many times — it is taken for granted. But don’t worry about it, that is how it is. You will miss many times but that is not the point. Don’t pay much attention to the fact that you have missed many times, pay much attention to the fact that you have regained many times. Remember this. The emphasis should not be that you missed many times, it should be that you regained remembrance many times. Feel happy about it. That you miss, of course, is as it should be. You are human, have lived on the horizontal plane for many, many lives, so it is natural. The beauty is that many times you came back. You have done the impossible; feel happy about it!

In twenty-four hours, twenty-four thousand times you will miss, but twenty-four thousand times you will regain. Now a new mode will start functioning. So many times you come back home, now a new dimension is breaking in by and by. More and more you will be able to stay in awareness, less and less you will go back and forth. The span of going back and forth will be smaller and smaller. Less and less you will forget, more and more you will remember — you are entering the vertical. Suddenly one day, the horizontal disappears. An intensity comes to awareness and the horizontal disappears.

That is the meaning behind Shankara, Vedanta and Hindus calling this world illusory… because when awareness becomes perfect, this world, this world that you have created out of your mind, simply disappears. Another world becomes revealed to you. Maya disappears, the illusion disappears. The illusion is there because of your sleep, your unconsciousness. It is just like a dream. In the night you move in a dream, and when the dream is there it is so true.

Have you ever thought in a dream, “This is not possible”? The impossible happens in a dream, but you cannot doubt it. In a dream you have such faith, in a dream nobody is skeptical, not even a Bertrand Russell. No! In a dream everybody is like a child, trusting whatsoever happens. You see your wife coming in a dream — suddenly she becomes a horse. Not for a single moment do you say, “How can this be possible?”

Dream is trust, it is faith. You cannot doubt in a dream. Once you start doubting in a dream the rules are broken. Once you doubt, the dream starts disappearing. If even once you can remember that this is a dream, suddenly this will become a shock and the dream will shatter and you will be fully awake.

This world that you see around you is not the real world. Not that it doesn’t exist. It exists — but you are seeing it through a screen of sleep, an unconsciousness is in between. You look at it, you interpret it in your own way; you are just like a drunkard.

It happened: Mulla Nasruddin came running. He was totally drunk and the man who was operating the elevator was just going to close the door, but he somehow pushed in. It was overcrowded. Everybody became aware that he was very drunk; his breath was smelling. He tried to pretend; he tried to face towards the door, but he couldn’t see anything — his eyes, too, were drunk and sleepy. Somehow he was trying to stand, but that was not possible either. And then he felt very much embarrassed, because everybody was looking and everybody was thinking that he was completely drunk; he could feel that. Then he suddenly forgot where he was and he said, “You must be wondering why I called this meeting.” Seeing that so many people were around, he thought that he had called a meeting and that the people were wondering why. By the morning he will be okay. He will himself laugh as you are laughing.

All buddhas have laughed when they awaken. Their laughter is like a lion’s roar. They laugh, not at you, they laugh at the whole cosmic joke. They lived in a dream, in a sleep, intoxicated completely by desire, and through desire they looked at the existence. Then it was not the real existence, they projected their own sleep on it.

4 thoughts on “Osho – Time is the world and eternity is God; horizontal is the world, vertical is God”